Jessica Penne: The Future is Now 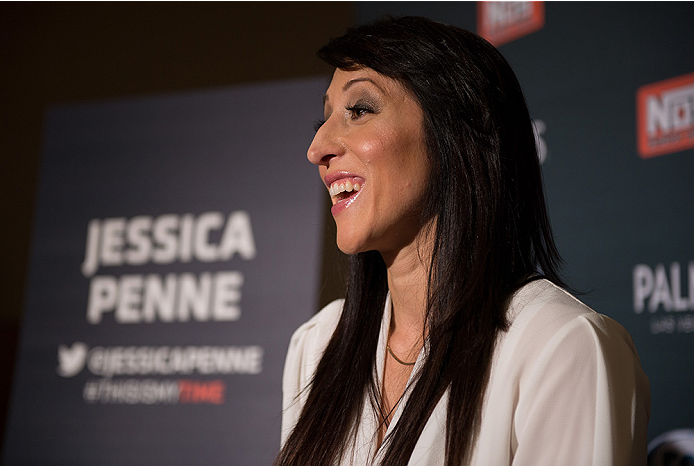 Comfort isn’t something a fighter ever sees in large supply.

The training grind is as rigorous as it sounds, as a day’s work comes with putting the body through various forms of punishment where muscles are stretched and pulled and punches and kicks handed out and taken in kind. All of these things are done in the preparation stage so that when the time to officially go to work comes around, a fighter’s body and mind will combine to be a slick machine that finds victory wherever that elusive beast presents itself.

Just taking that aspect into account shows how little time there is for a fighter to kick back and slip out of fight mode, and for Jessica Penne, there have been plenty of additional elements to adjust to. In fact, the 31-year-old Orange County representative has spent the past year and a half making the biggest transition of her fighting career, and she’s beyond ready to settle into some stability.

The former Invicta atomweight champion was one of the 16 women selected to participate on the 20th installment of The Ultimate Fighter, and while the invitation to compete under the UFC banner represented the opportunity of a lifetime, it also brought some interesting challenges. In addition to changing promotions, she would also be leaving the 105-pound weight class to compete in the inaugural tournament to crown the first women’s 115-pound champion in UFC history. Fighters dropping down in weight is a regular occurrence in MMA, but rarely do they ever “fight up.” Regardless, nothing was going to stop Penne from chasing the ultimate prize.

“Moving into a house with 15 other girls was definitely something I never thought I’d be into but it was just too good of an opportunity to pass up,” Penne laughed. “I knew it was going to be difficult - especially for me - because just going in there with a bunch of people I didn’t know isn’t exactly something I would normally do. I also never really had the desire to be on TV before, but the opportunity was something I couldn’t pass up.

“Going in there I really tried to mentally prepare myself for how it was going to be. I know a few different people who have been on the show for other seasons and everyone gave me advice about what to expect. With that I thought I was prepared to go in there, but once I got in the house I was totally overwhelmed by the experience. I really didn’t grasp the concept of no outside communication. Some of it was nice, kind of being off the grid and all, but other times it was extremely difficult. I had to work to keep my focus on why I was there and try not to get wrapped up in all the craziness of the TUF house.”

Much like previous seasons of the reality show, there was no shortage of drama once things got under way. Grudges were quick to form as fighters set about working their way through the experience. And that is usually where things become interesting.

Where some fighters are focused on the task at hand, others use the opportunity to promote themselves with as much camera time as they can garner. In that regard, Penne was certainly one of a handful of the cast members who put fighting and the mission at hand above all else, and let the insanity and drama that can hang around every corner of the TUF house fall where it may. She was there to fight and her natural presentation resonated well with the viewing fan base.

“I definitely stayed true to myself and stayed out of all the cattiness that went on in the house,” Penne said. “It was actually kind of crazy just sitting back and watching everything because it was crazy how everybody got wrapped up into all of this drama. It really was a strange dynamic that happened inside of that house. The more time that would go by, the deeper people would get caught up in different dramas and it was very strange to see people acting very much out of character.

“I’m just a laid-back California girl, but when it’s time to get to business I can turn it on. I’m also capable of shutting it off. I don’t think you have to be mean and nasty all the time. There is a time to be a fighter and a time to be a normal person and I definitely enjoy my time away from fighting as well.”

And while she her run at championship gold would be halted for the time being by Carla Esparza in the tournament semifinals, the California native is ready to make her official UFC debut against Randa Markos Friday night at The Ultimate Fighter Finale in Las Vegas. With all the chaos of the show behind her and a bright future ahead, the stage is set for Penne to make a proper introduction on the sport’s biggest stage. And she’s excited to settle into her new realm and get back to work.

That means regaining as much normalcy and comfort as a fighter can find before stepping into the Octagon and putting it all on the line December 12.

“I’m really excited about it,” Penne said. “I know we are still kind of stuck in the whole TUF thing with this show being the finale and all, but it’s so nice to be able to get back to regular training and surrounding myself with good people, coaches and my training partners. That feels really good and I feel very well prepared for this fight. I’m excited for it.

“[Markos] is a tough girl, no doubt about it, and I believe it’s going to be a tough fight. Everyone in this division is tough and I’m really looking forward to the challenge. I’m definitely looking forward to this fight and it’s a dream come true. I never thought I would get the opportunity so I’m just trying to live in the moment and enjoy it. I’m very happy and excited about the future.”