Jessica Eye's focus remains on learning to be the best and she's more than ready for the journey.
By Thomas Gerbasi, on Twitter: @TGerbasi • Jun. 12, 2020

If you want to know how focused Jessica Eye is for her Saturday main event against Cynthia Calvillo, consider that when asked what she was going to be doing on Friday, June 5, the talk quickly went back to her training schedule.

Wrong answer. What the number one flyweight contender should have said was that she was going to be celebrating the tenth anniversary of her pro debut in 2010.

“That’s crazy,” said Eye. “It's also gonna be my 13th fight in the UFC so there's a lot of cool things happening.”

When Eye debuted on the NAAFS: Fight Night in the Flats card in Cleveland, stopping Amanda LaVoy in two rounds, the 24-year-old probably couldn’t have predicted how her mixed martial arts journey was going to go. Would she picture spending a good part of her career as a bantamweight because the UFC didn’t have the flyweight division, or finally getting her chance to shine at 125 pounds and earning a title shot, or having to work her way back up after losing that championship bout? 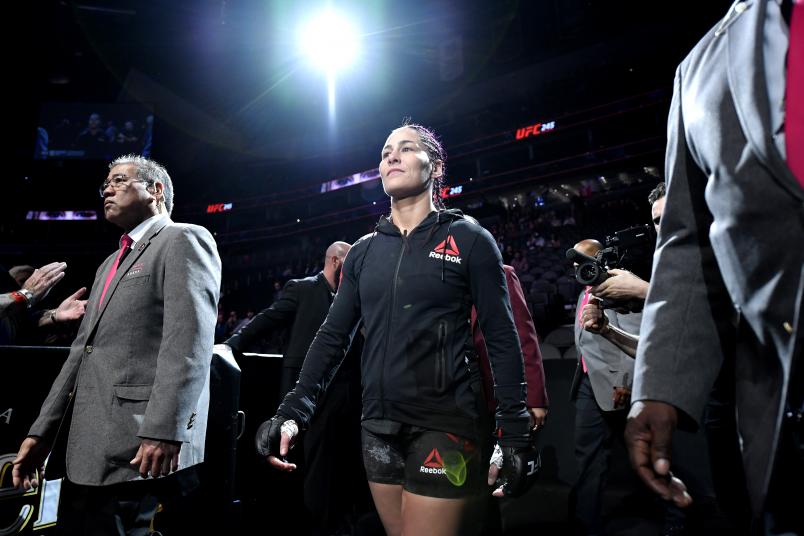 Jessica Eye walks to the octagon in her women's flyweight bout during the UFC 245 event at T-Mobile Arena on December 14, 2019 in Las Vegas, Nevada. (Photo by Jeff Bottari/Zuffa LLC)

Probably not. But whatever happened, Eye probably assumed that whatever she did, she would always do it from Ohio.

“I always thought I would be in Ohio,” she said. “I never would have thought that I was gonna leave.”

She did, now calling Las Vegas home since before her 2019 title fight with Valentina Shevchenko. It was a necessary move, not just because she needed a change in scenery training wise, but because she needed to escape the drama at home that had plagued her for most of her life. Now she could do something for herself and not everyone else. And while she still loves Cleveland, Las Vegas has been good for her.

“It's one hundred percent accurate on so many levels,” Eye said. “It's really been a breath of fresh air. I love Cleveland, that's where I'm from and where my heart will always be, but I really, really do like it here in Vegas and I feel like I found a new home for now.”

Eye wouldn’t win that title fight with Shevchenko, getting stopped in the second round, and she missed weight before her subsequent win over Viviane Araujo and ahead of Saturday’s bout with Calvillo. But on Saturday night, all that matters is what she does when the Octagon door shuts, and with a statement making performance, she will not only keep her number one ranking, but keep her hopes alive of a second title shot. And though it doesn’t matter to Eye if that shot takes place against Shevchenko or expected future challenger Joanne Calderwood, she does want another fight with “Bullet.”

“Until the two girls actually fight, we don't know who could possibly hold the title next,” said Eye. “Whoever it is, I'll eventually fight for that title, but I don't really identify myself with people. Me and Valentina, regardless if it's win, lose or draw, I hope I get to rematch her just for the fact that she beat me in that way. That's the competitor in me. Other than that, whoever has that title when I go to get it, I'll address that then, but as of right now, let's fight and let's do what my job is. I just want to fight the girls and get experience and get in front of the screen and showcase myself, and I'm healthy, so I want to do it.”

Experience? That’s odd coming from one of the most experienced 125-pounders on the roster, but Eye has it right when she says that if you’re smart in this game, you never stop growing, learning and taking on more experience. Suffice to say that ten years after her debut, she’s just getting warmed up.

“Experience is never ending,” she said. “That's a life lesson for you. No matter what you do in life, you're always learning, and the more experience and more learning under those lights, the more I get used to it and the better I get at it.”