Jessica Eye Moves On To the Next One 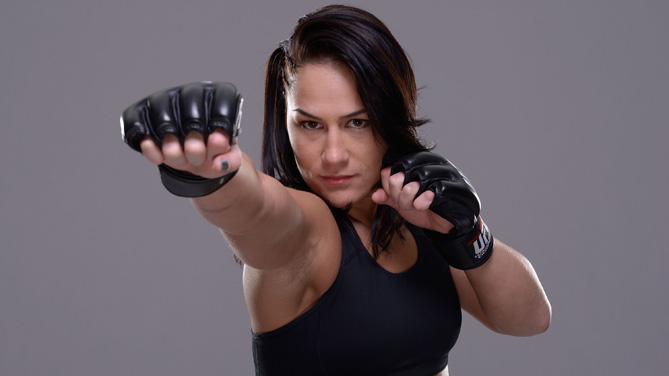 Having had frequent conversations with Jessica Eye over the last couple years, I had a pretty good idea about how things played out between her loss to Miesha Tate back in July and the Cleveland, Ohio native getting booked to return to action this weekend against Julianna Pena at UFC 192 in Houston.

My guess: walk to the back, scream, get checked out and then find UFC matchmaker Sean Shelby.

“You know me pretty well because that’s kind of what happened,” Eye laughed when we caught up to discuss her career earlier in the month. “It wasn’t that particular night because I let everything settle in, but when it came down to it, between Sean and Dana (White), I annoyed both of them to the point that they were probably like, ‘Is she ever going to stop messaging me?’”

The reason for Eye’s persistence was two-fold.

Like every fighter coming off a loss, she wanted to begin the process of distancing herself from that setback and get back into the win column as soon as possible. More importantly, however, is that the 29-year-old contender was coming off consecutive nine-month layoffs between fights and wanted no part of another long stretch on the sidelines, even if that meant jumping into the Octagon with someone a little further down the rankings this time around.

“I think some of the girls have been injured lately and that has caused some of them to be sidelined, but I’m not and I don’t want to sit out,” Eye, who endured extended breaks following her fights with Alexis Davis and Leslie Smith before stepping into the Octagon with Tate in Chicago, explained. “I had two nine-month layoffs and I didn’t want to do it again, especially coming off something like that.”

More on UFC 192: Relieved Cormier ready to defend crown | Gustafsson overcomes setbacks for title shot | Outside the Octagon: Focus should be on here and now, not Jones | DC, Gustafsson talk prep for 192 | Homesick Rodriguez focuses on bright future | VIDEO: Gustafsson on what he learned from losing | WATCH: Hardships mold Cormier | WATCH: DC analyzes his fight vs. Jon Jones | WATCH: Rankings Report | Get your UFC 192 tickets | Pre-order the PPV now

Her voice cracked when she referenced the fight, a sign that despite being more than two months removed from the encounter and already set to return to action, the wounds have not quite healed.

During her time off following her win over Smith in Mexico City, the Strong Style Fight Team member lobbied for the chance to challenge for the women’s bantamweight title, but was eventually paired with Tate instead in what was viewed by most as a title eliminator.

All that stood between Eye and a showdown with Ronda Rousey was the former Strikeforce champion, and she was confident that things would fall her way. But they didn’t.

The fight turned on a dime when Tate landed a big right hand that floored Eye, and while the tough-as-nails talent from the shores of Lake Erie was able to shake it off and make it to the final horn, she ended up on the wrong side of three 30-27 scores and watched her grand opportunity slip through her hands.

“It was gut-wrenching,” Eye admitted. “There is nothing in my life that I’m doing right now; everything revolves around fighting for me – my relationships, my friendships, my whole world 100 percent revolves around that because it’s what I want to do, and for me to sit out those two nine-month stretches and be unsuccessful against Miesha, it was hard to accept.

“My heart was really hurting and I was really hoping the UFC was going to make a good decision and allow me to get back to what I do best, which is fighting and doing what I love.”

All too often in this sport, fighters resurface following losses with a laundry list of reasons why things didn’t go their way on fight night. A lucky punch, an early stoppage and myriad injuries that should have kept them from stepping into the cage – but didn’t – all contributed to their downfall, while acknowledging that on the night in question, their opponent simply delivered the better performance when it mattered most usually falls well below the excuses and explanations. But not with Eye.

As much as the loss continues to sting, Eye refuses to offer up excuses or detract from Tate’s performance.

“There is nothing I can do about it and I never want to take away from anybody else because I know how much goes into this sport and how much these women go through doing what we do, so I’ll never take anything away from her,” Eye explained before she faces Tate’s close friend and the first overall selection from Season 18 of The Ultimate Fighter this weekend. “Do I think she wins that fight one out of f**king 10 times? Yes, totally – I think that was something that happened – but I’ll never discredit her.

“It is what it is and I’ve got to keep moving forward,” she added. “I’m not the kind of person that dwells on things. I accept them for what they are and move forward so I can be better. I think for people to dwell on it can be the worst thing you can ever do.”

And so for the spirited fighter with the 11-3, 1 NC record, it’s on to the next one – a chance to get back into the cage quickly against another tough, ranked opponent and get back to delivering the kind of performances that have quickly made her a fan favorite in the UFC.

“I’ve gotten all the tough girls,” Eye, who started her UFC tenure with a fight against former Strikeforce champ Sarah Kaufman in the same building she’ll compete in this weekend, remarked. “I don’t think anybody in the UFC – and I can honestly say this – has ever had a tougher road than I have in the beginning of their career. There is nobody. The only (top-level fighter) I haven’t fought is Ronda.

“I think that everybody that has ever watched me fight – win, lose or draw – has walked away saying, ‘That’s a fighter; that’s what we want to see in a female fighter – someone who is strong mentally and physically, who can go through adversity and come back.’ I feel like I can do all that and that’s what they’re going to see against Julianna.”