UFC 257 Star Overcomes Health Issues And Tailors Camp To Become Her Best Self Yet
By E. Spencer Kyte, on Twitter @SpencerKyte • Jan. 21, 2021

Two weeks before making her return to the Octagon, Jessica Eye is angry with herself.

“I should have noticed when I missed weight twice in a row that my body was screaming at me that something was wrong,” said the flyweight veteran, who takes on fellow Top 10 staple Joanne Calderwood on the main card of UFC 257.

Ahead of each of the first 22 fights of her career, the Cleveland native, who relocated to Las Vegas ahead of her flyweight title fight against Valentina Shevchenko in the spring of 2019, hit the mark when she stepped on the scale.

Whether at flyweight or bantamweight, Eye handled her business like a pro, but that changed ahead of her bout with Viviane Araujo at UFC 245. On the morning before the fight, Eye hit the scales five pounds over the divisional limit for a non-title matchup. 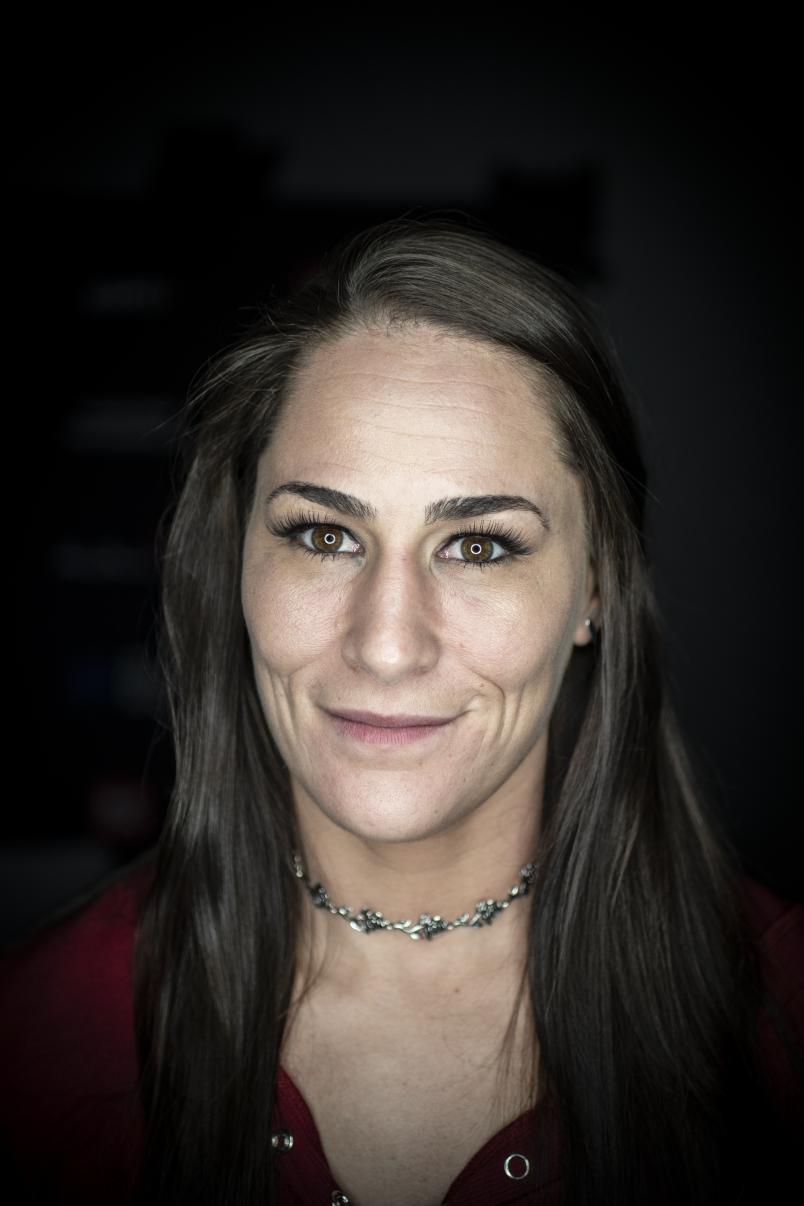 Frustrated, she gave a double “thumbs down” as she posed for the customary post-weigh-in pictures and shuffled off the scale looking disappointed with herself for having missed weight for the first time in her career. She performed well the following evening, registering a unanimous decision victory over Araujo, but six months later, when she returned to the scales ahead of her main event matchup with Cynthia Calvillo, missing weight was no longer a one-time occurrence.

Looking almost scared standing inside the protective hoop that encircles athletes when they step on the scale naked, Eye missed the mark by a quarter of a pound; her second straight miss. The next evening, she turned in an atypical performance, losing a lopsided unanimous decision to Calvillo in a fight where the scrappy veteran didn’t show the gumption that has come to define her career.

The hunt ultimately revealed numerous food allergies that had previously been undiscovered, a diagnosis of Irritable Bowel Syndrome (IBS), and a gall bladder that was functioning at nine percent.

She had the mostly non-functional organ removed in August and has significantly altered her diet, shifting to a dairy-free, no carb approach that meant eliminating a number of favorites, including a fight week staple.

“I’m allergic to eggs and I ate eggs every fight week,” said Eye, who carries a 15-8 record with one no contest into her matchup with Calderwood on Saturday. “It wasn’t until this last fight week that I found out I was allergic to eggs because I was puking them up during the week. 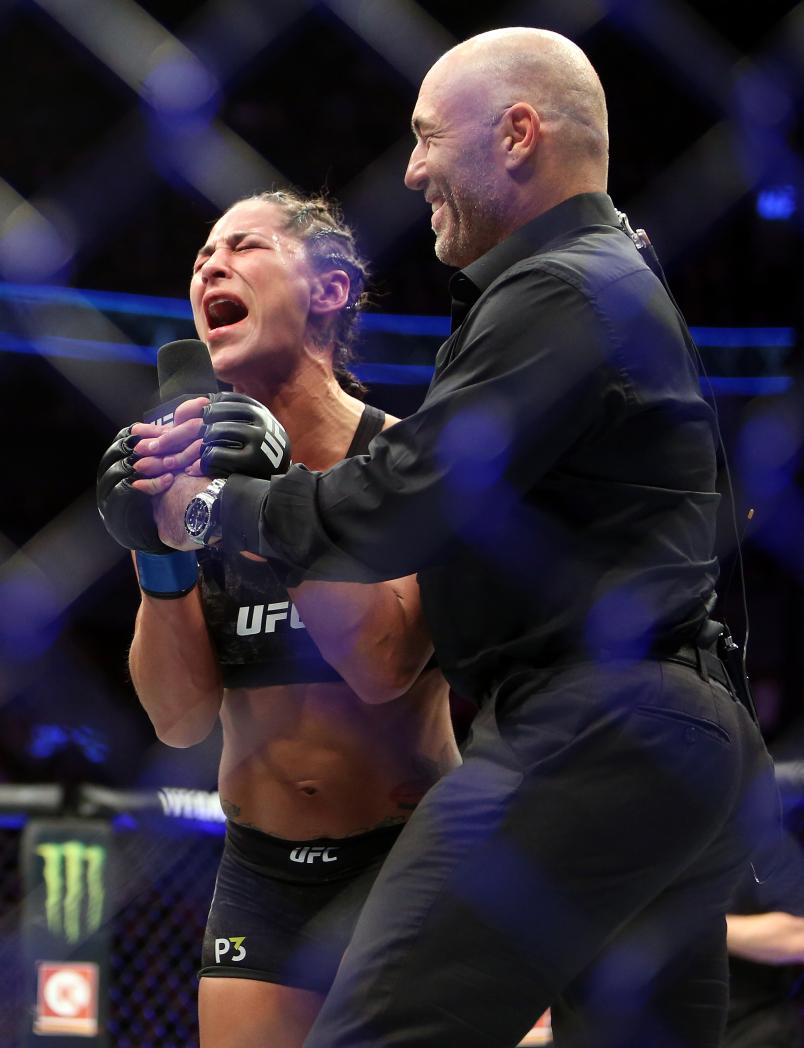 “I was literally throwing up all these foods that I would normally eat.”

While chasing down answers with the assistance of medical professionals sounds like an obvious course of action for some, Eye initially internalized all the issues, blaming herself and passing them off as the product of stress brought on by parting ways with her long-time team, moving to Las Vegas, and struggling with life in lockdown as a result of the COVID-19 pandemic.

She figured once life settled down and she got into a better routine, her health issues would pass, but instead they lingered.

Now several months removed from surgery and into a new approach, the 34-year-old former title challenger is feeling significantly better.

“It’s nice to feel much more clear-headed,” said Eye, who cited “brain fog” as one of the most persistent issues she dealt with ahead of her last several fights. “I’m eating the right foods, I figured out what foods were causing me problems, and I no longer have a dead gall bladder.”

She’s also continued to readjust the way she prepares for her fights as well, moving to a more boxing-inspired approach where everything is tailored around her.

“When I left Strong Style, I never wanted to get with another team,” said Eye, who trained with the Cleveland area crew that includes current UFC heavyweight champion Stipe Miocic for 13 years prior to parting ways ahead of her bout with Shevchenko. “I wanted to be ‘The Eye Team’ — I wanted to be a lone soul in that way to where any time I brought someone to a camp, they were specifically paid for a job that was directed to me.

“I don’t want to share my time anymore; I’m past that. I’m slightly selfish. I’m very monogamous in my relationships and my training relationships have to be that way as well.

“I’m finally on The Eye Team — I’ve been trying to get here and I’m finally here,” she said, adding that while she still makes occasional trips into Xtreme Couture, she’s primarily working with her own set of coaches, including Chris Ben-Tchavtchavadze, a boxing and strength and conditioning coach with Floyd Mayweather’s Money Team outfit.

Saturday’s contest against Calderwood continues a tradition for Eye, who has forged her reputation as a tough, gritty competitor by constantly facing top-tier opposition.

When the UFC didn’t offer a 125-pound weight class on the women’s side, she moved up to bantamweight, sharing the cage with former Strikeforce champ Sarah Kaufman, former UFC champ Miesha Tate, and title contenders Alexis Davis, Sara McMann, and Bethe Correia. 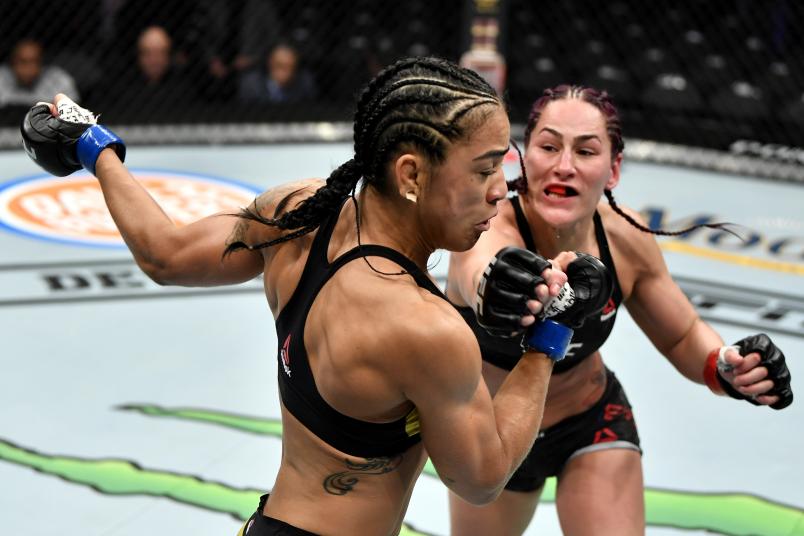 Jessica Eye punches Viviane Araujo of Brazil in their women's flyweight bout during the UFC 245 event at T-Mobile Arena on December 14, 2019 in Las Vegas, Nevada. (Photo by Jeff Bottari/Zuffa LLC)

Upon returning to the flyweight ranks, it’s been much of the same, as Eye has faced the current champion, as well as the fighters currently stationed at Nos. 2, 5, and 9 in the rankings. Calderwood, who was in line for a title shot before rolling the dice and losing to Jennifer Maia last summer, currently resides at No. 7.

“The fight with Cynthia was the first time where I took something on an ego-based decision and I really hurt myself and that’s when I realized that’s not what makes me successful,” said the hard-nosed competitor who prides herself on being willing to face any challenge set before her. “I looked back on my most successful times and what I did in those camps, during those days of fighting those top-level fighters, and figured out what was good, what was bad, and what to take from them and apply them properly moving forward.

“We’ve known about this fight for a long time and I’ve controlled everything that I need to so that I can go in there and fight an uncontrollable fight,” she added. “I think I’ve learned a lot in taking those experiences and using them the proper way.”

With her health issues identified and addressed, and a quality matchup against a top-ranked opponent on the main card of the year’s first pay-per-view, Eye is hoping to show her critics and detractors that her missing weight is a thing of the past, while testing herself against another top-tier talent.

“It’s awesome that they matched me and JoJo and it makes sense,” said Eye. “Anybody that knows me, knows that I take myself very seriously, so not making weight was never an option —I was really sick — but I can’t change the minds of people, so I know that all can do is shut up and go prove myself.

“I’m lucky that I get JoJo, who, for some reason, seems like there is some kind of beef between us, but there’s not,” she added. “I think she needs to hate me — that’s her way of getting ready for a fight — but that’s not who I am. I need to make sure I don’t fall into that B.S. and just stick to what I’m doing.”

And if everything goes well, 2021 will be a much more enjoyable year, inside and outside of the Octagon.

“Everything is going to be different for me,” Eye said, looking at the year ahead. “It’s a fun, fresh start to get everything back on track.”