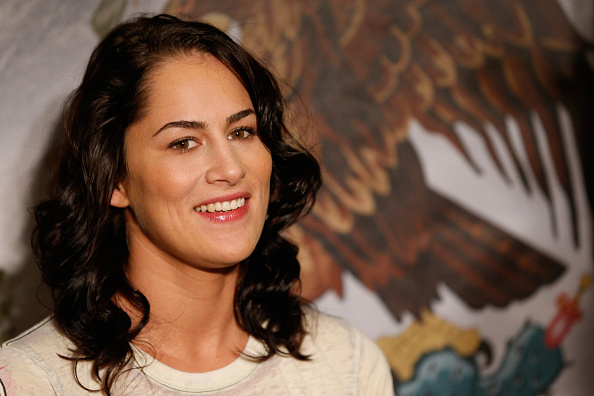 If you’re going by her father dealing with cancer, the often strained relationship between the two now in limbo, the reversal of her win over Sarah Kaufman to a no contest, and a UFC loss to Alexis Davis, you might be tempted to call 2014 the worst year of Jessica Eye’s life.

The only thing is, she wouldn’t. It wasn’t the best, but she’s had bad years before and still found a way through them. It’s part of what makes her who she is as a fighter – in and out of the Octagon.

“Unfortunately I’ve been put in a lot of life situations where I didn’t really have much of a choice but to either mature or say ‘woe is me, woe is me,’” she said. “And I’m not that ‘woe is me’ kind of girl.”

That’s for sure, and 2014 isn’t over yet, so after nearly nine months on the sidelines after her split decision loss to Davis in February, she has the chance to end the year on a winning note tomorrow night in Mexico City against Leslie Smith. On paper, this battle of strikers could steal the show at UFC 180.

“I feel like she’s a gamer,” Eye said of Smith. “I like girls that are gamers and that are ready to fight and cool with fighting whatever fight that’s presented to them. And while we’re both strikers, I think we’re going to bring the best out of each other in different aspects than striking.”

A win would even Eye’s UFC record at 1-1 with 1 NC, and while on the surface that may not jump out at you, in a women’s bantamweight division that is wide open in terms of prospective foes for champion Ronda Rousey, a couple good wins could turn a contender into a title challenger in a matter of months.

“Any female in the bantamweight division right now is within reach, and I see the division only getting better,” Eye said. “It’s only going to take one or two fights finished in an impressive way if they’re going to give someone that shot right away. And whoever’s making the most noise deserves the shot.”

Eye has made plenty of noise in the UFC since her debut in October of last year, but the noise in 2014 hasn’t all been positive, with some fans turning on her after she tested positive for cannabinoids after the Kaufman fight. That gave the affable and accessible Ohio native a taste of the negative side of celebrity, one she wasn’t necessarily prepared for.

“At first it was a huge slap in the face,” she said. “I’ve always been very open with the media and very open with fans, and what I had to realize is that not everyone is going to like me, and I can’t try to convince the people who just don’t want to like me. I can’t force people into it. I went through some adversity and saw people turn their back on me, but some people also opened up to me and made me feel like I wasn’t the only one to deal with stuff like this. So it’s been a good balance that I’ve been able to find, so if people really want to look into it and really want to know me, they’ll do it in a positive way. They’re not going to do it where they disrespect me or call me names. They know at this point I just block them.”

Getting rid of negativity in her life in her time away from the Octagon also applied to her personal life. Thankfully, her father Randy is doing well in his fight against glioblastoma, but as far as the two dealing with each other on a daily basis, Eye says that’s probably not going to happen anytime soon.

“Me and my father have a very unique relationship, and we had trouble for many, many years just finding a way to get along with each other and truly appreciate one another,” she said. “I think that we have come to the point that we both know that we love each other, it’s just very hard to maintain in each other’s lives. We’ve both taken a step back in involving each other in our lives. My father knows that I love him and I’ll always love him, and he’ll always love me, but can we get along? No.”

It’s not a conclusion Eye came to easily, but at a point, everyone has to take stock of their life and do what’s best for them. For Eye, those hard decisions have led to a happier life, and when she’s happy outside the gym and Octagon, when it’s time to train and fight, she’s back to being “Evil.”

“What I think that I’ve done is really find the balance that I needed to not let things that were happening in my personal life overflow into my MMA life. I’ve been training my butt off and just fixing a lot of things that I know I need to work on, and re-finding myself. I feel like I’ve re-found myself as a person and I’m ready to get back in there.”

Her timing is impeccable, especially as a Clevelander in a town that is pretty excited about sports again with the return of LeBron James to the Cavaliers and the arrival of Johnny Manziel to the Browns. Eye is amped up as much as any Cleveland sports fan, but she does have a warning for her peers.

“I’m gonna be the first one to bring a championship back.”

So is it safe to say all is well in the world of Jessica Eye?

“Life is good and I can’t wait to show everyone who the real Jessica Eye is.”