Jessica Eye Fights for Her Father

"We just look at things like this where they tell us that we can’t, and
we’re like, all right, we’re going to do everything we can to prove them
wrong." - Jessica Eye 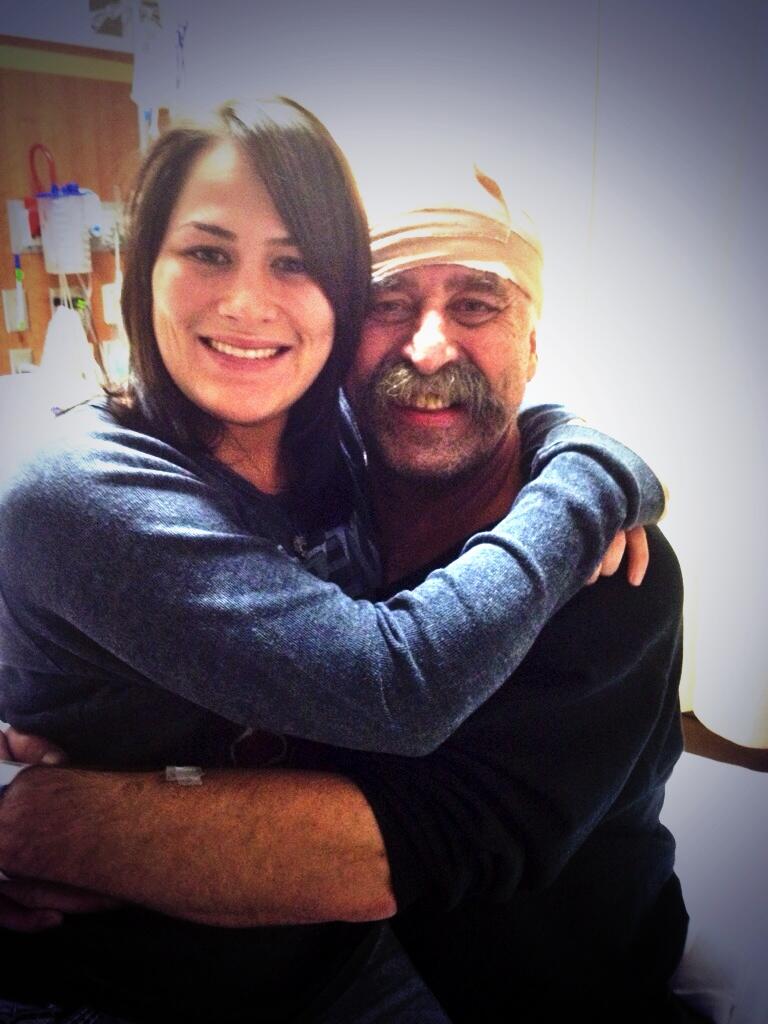 This year will mark a different Christmas for the Eye family, but even as patriarch Randy Eye battles brain cancer, some old habits remain.

“Of course my dad has never been Christmas shopping in his life,” said his daughter Jessica. “So he gave me money last night and was like ‘hey, go buy something for your brothers and you. You guys go get yourselves something nice.’”

It’s just his way. And through the ups and downs, Jessica Eye, a highly-regarded contender in the UFC women’s bantamweight division, has always been there – if not physically, then always in spirit. And that’s no surprise to anyone that knows the 27-year-old.

“It’s my father, and I’m a very loyal person,” she said. “I know that everybody’s not going to treat me the way that I’m going to treat them, but I do know that some people you have to make exceptions for, even if they do hurt us a little bit. They’re still family, and when it comes down to it, I have one dad, and one dad only, and things are not always going to be the way that I wanted them to, but I’m grown enough now, as an adult, to make that decision on what will hurt me and what won’t hurt me, and what will hurt me is me not allowing myself to be there to help him and fight through these moments. I have to accept him for who he is.”

A retired welder who worked for years at a Chrysler stamping plant in Twinsburg, Ohio, Randy Eye probably fits every idea you have of a rough, tough, gruff, no nonsense resident of the Rust Belt, an area of the United States that has progressively hit harder and harder times over the years. Eye was one of the lucky ones who remained employed, but that’s not to say life was smooth sailing for him. Divorced from Jessica’s mother, raising her and her two brothers didn’t come with a manual, and there were several bumpy patches over the years, not the least of which was the 2003 accident in which he and his daughter were blindsided by a drunk driver. Jessica emerged with a broken back, Randy in need of reconstructive knee surgery.

But they got better and battled on, 'battling' occasionally being the operative word.

“Me and my father have a very good relationship, but we’re also very alike, so when we argue, we argue and it’s like World War III coming down,” she said. One of those wars led to the two breaking away from each other right before the biggest night of Jessica’s professional life – her UFC debut against Sarah Kaufman in Houston on October 19th.

“Unfortunately, right before my UFC debut, we got into a really big fight and I didn’t let him come to the fight,” said Eye, who won a three round split decision over Sarah Kaufman. It was probably the most joyous time of her life, but life has an irritating tendency to bring you down to Earth just as soon as you hit the heights, and a month after her win, she got some horrible news about her father.

“The day before Thanksgiving, my dad was diagnosed with a tumor and he went directly into surgery,” recalled Eye. “He had a baseball-sized tumor removed from his brain on his right side, and it was something that went undetected for quite some time. They were saying it was probably growing there for a year. They were able to remove it, but unfortunately when they did the surgery, it did come back as malignant.”

Last week, the Eyes went back to the doctor’s, where they were told that Randy had an aggressive brain cancer called glioblastoma.

“It is terminal,” said Jessica. “Very few people live past the 15 month mark that they’re given with the initial prognosis, but there is a lot of hope out there for a lot of alternative medicines. There’s a really cool story out there about a lady who is the only person to ever survive for 12 years, so I’m speaking out about her story and what she’s done, and a lot of it is about changing your diet and teaching your body to do the right things, so that’s where I step in as a fighter and an athlete who eats well. This next step we’re taking with my dad is to teach him how to eat.”

It’s the hardest thing you’ll ever have to go through as a child, understanding that now your parent is the one depending on you. But while you can hear the pain in Jessica’s voice, you also hear the resolve. So not surprisingly, she’s not about to let her father stop fighting.

“At first, it’s kind of surreal when they told us that it was a terminal illness,” she said. “We really didn’t believe it. We were like ‘no, we can beat it.’ I think that’s just who my dad is, and who I am, and who my brothers are. We just look at things like this where they tell us that we can’t, and we’re like, all right, we’re going to do everything we can to prove them wrong. But I had never seen my dad like this before. He was known to be a very hard-nosed, rough kind of man, and the person I’m seeing now since the diagnosis, it’s a complete change. He’s been very spiritual about the fact that he’s glad that he’s been given a second chance to try to make this better and help other people.”

Jessica Eye has been doing her part too, not just by being there, but also by starting a fundraiser to aid her father with the costs associated with his illness.

“I’m trying to do my own personal fundraiser to raise $10,000 for his first surgery that he had that was $13,000,” said Eye. “I’m trying to help him raise that first bit. My dad is 55 years old, retired, and I just don’t want him spending this last bit of his life worrying about money.”

She pauses, then thinks out loud with another wish.

“And hopefully I can convince my new and wonderful boss, Dana White, to bring a UFC to Cleveland and I can show him how much Ohio loves me and MMA and my father.”

It’s this desire to get back into the Octagon and fight again as soon as possible that is driving her, and not for the usual reasons of getting another paycheck, moving up the rankings ladder, and getting in line for a title shot. Instead, she just wants her father to see her fighting in the UFC.

“I feel extremely guilty now and it really bothers me,” she said of the argument that led to Randy not going to see Jessica’s UFC debut in Texas. “Less than a month later (after the Kaufman fight), he’s diagnosed with a terminal illness and I don’t know when I’m fighting again and I don’t know what he’s doing. I don’t know if he’s going to make it again and it’s been depressing in that aspect. I’m mad at myself for maybe not noticing things sooner myself, that maybe the reason why he was acting the way he was was because of the tumor. They even said that the tumor was changing his behavior and it was. He’s always kind of a testy person, but it was making him very aggravated and distant, and I couldn’t understand it. He just wasn’t the same. So when I got the news about it, it brought down my world a little bit and made me feel real bad about the way things went down before my big debut. I’m very hopeful that I’m going to be back in the Octagon soon enough that my dad will get to actually see me.”

In situations like these, you learn a lot about who your friends are and whether your family members really belong in that inner circle with you. Jessica is the first to admit that the Waltons weren’t living in their home in Rootstown, but then again, what family doesn’t have their share of drama? What’s important is what happens after that and how you react to being in a situation that isn’t always ideal. And that’s where you really get a sense of who this feisty prizefighter is.

“If you’re not happy with something in life, it’s your choice to make it different and be who you want to be and live the life you want to,” she said. “If you do that, life will never surprise you and catch you off balance. You’ll always be able to accept the things that life throws at you.

“I’ve always wanted to break the cycle with what was going on with my family and the fact that most of the Eye family were not close,” she continues. “And with a lot of people, when I say my family, they’re not really my family; they’re just friends that have been around because my real family just never were able to truly get along. I learned by seeing things that I definitely didn’t want to see and I wanted to be a better person because of it, so I made that decision to be better than that. I want to make an impact and I want to inspire people and be someone to look up to, and that’s one of the biggest things I’ve enjoyed about fighting is the fact that I really didn’t have a superhero when I was growing up. I didn’t have someone I looked up to or something that made me feel good other than sports. And now I feel like I’m able to do that for people and that makes me feel good. I have to be the one that says enough is enough.”

She has been. Today, Randy Eye was released from the hospital after being treated for a staph infection that arose on the incision site after his surgery. He’ll be on antibiotics for a while, but he’ll be home for Christmas. It’s a different Christmas for sure, but one Jessica is finding a way to embrace.

“Our family’s had a lot of issues, but I feel like it’s gonna bring us all closer together though,” she said. “So I’m excited for him to be able to get home.”

Jessica Eye is a helluva fighter. She may be an even better daughter.

For more information on Jessica Eye's fundraiser for her father, or to make a donation, click here