Jéssica Andrade's Constant Has Been Change

Change Has Been So Constantly Present In Jéssica Andrade's Life That It Probably Feels Normal As The Former UFC Strawweight Champion Makes Her Return To The Strawweight Division
By E. Spencer Kyte, on Twitter @SpencerKyte • Apr. 18, 2022

Change has been a constant theme in Jéssica Andrade’s life over the last few years.

At the end of 2020, the former strawweight champion changed divisions, venturing to flyweight and instantly establishing herself as a contender with a first-round stoppage win over Katlyn Chookagian. Then she changed addresses, moving to Las Vegas in order to reap the benefits of the UFC Performance Institute, and now, she’s changing weight classes again, returning to the 115-pound division and stepping into a main event assignment against fellow Brazilian Amanda Lemos this weekend in her new hometown.

“Working with the UFC PI had a big influence on coming back down to strawweight,” Andrade said through a translator, discussing the move back to the 115-pound weight class. “Having the monitoring of nutrition, supplementation, physical preparation, and recovery made a big difference in my mind. I was able to adapt easier. My weight went down more easily. 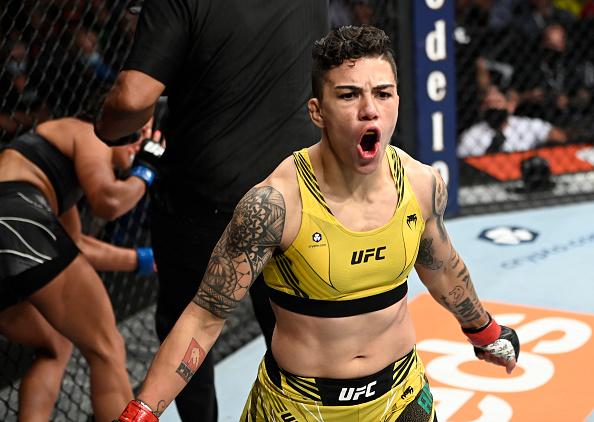 Jessica Andrade of Brazil celebrates her win over Cynthia Calvillo in their flyweight fight during the UFC 266 event on September 25, 2021 in Las Vegas, Nevada. (Photo by Jeff Bottari/Zuffa LLC)

“Rose (Namajunas) having regained the title didn't change much for me returning to strawweight,” continued Andrade, who won the title from Namajunas at UFC 237 and battled her tooth-and-nail in a three-round rematch she lost by split decision a little more than a year later. “I was very happy the day she won; I was there and fought Valentina (Shevchenko) on the same day, and I truly was very happy to see her win like that.

“Now that I’m back, it could open the possibility for a trilogy between me and her.”

While the potential of a third date with Namajunas certainly intrigues the diminutive powerhouse, the multi-divisional standout wasn’t looking for a free pass to the front of the line of contenders when she opted to return to the 115-pound weight class, despite having earned a pair of dominant stoppage victories and challenged for gold in her three-fight sabbatical at flyweight.

Ever the competitor, Andrade welcomed the opportunity to dive head-first into a dangerous assignment, just as she’s done at every stop in her UFC career, and sees this weekend’s matchup with Lemos as a great opportunity to hit the ground running in her return to the strawweight division.

“I think what excites me the most about this fight with Amanda is the strength that she has,” Andrade said of her countrywoman and opponent on Saturday, who arrives on a five-fight winning streak and has flashed legitimate fight-changing power in her three most recent efforts. “I want to fight the best, I want to face the strongest, and Amanda is definitely among those.

“I'm very strong and fast at this weight class, and I think I have good knockout power for the division, as well,” Andrade continued, addressing why the 115-pound weight class is her ideal fit. “I have done very well at flyweight, as well, but I will always be facing people that will be bigger than me. At strawweight, pretty much everybody is around my height or only a little taller, so I guess that is where my frame fits the best.”

It’s funny to hear Andrade speak of facing bigger opponents at flyweight, not because it wasn’t the case, but because it underscores just how miscast she was at the outset of her UFC career fighting in the 135-pound weight class.

At the time, it was the only division on the women’s side of the sport active in the UFC, so she accepted the opportunity to step into the Octagon and did relatively well, going 4-2 in her next six fights after dropping her short-notice debut to former title challenger Liz Carmouche in Seattle.

This summer marks 10 years since that initial UFC appearance for Andrade, and if everything goes according to plan, the ultra-talented Brazilian wouldn’t mind sticking around for another decade. 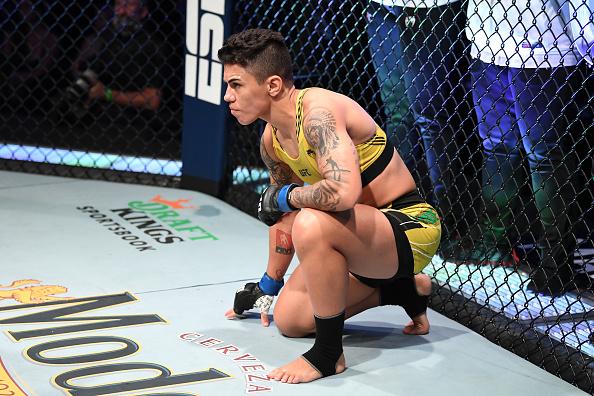 Jessica Andrade of Brazil is introduced prior to facing Valentina Shevchenko of Kyrgyzstan in their UFC women's flyweight championship bout during the UFC 261 event at VyStar Veterans Memorial Arena on April 24, 2021 in Jacksonville, Florida. (Photo by Josh Hedges/Zuffa LLC)

“Sometimes I look back and it doesn't seem like it's been 10 years, right, but when I stop to think about it, I see that I had 20 fights, going to 21, within the organization,” said Andrade, who is the only female fighter to earn victories in three weight classes. “I think I might be the female fighter with the most fights in the organization by now, hopefully I can keep on going, making history and breaking records for the next 10 to come.

“I think I started at the right time and, for sure, when I stop, I'll also know how to stop at the right time, but I'm very, very happy with my trajectory,” continued Andrade, who does, in fact, hold the record for the most fights of any female competitor in UFC history. “Everything I've done inside the UFC is everything I've been learning and showing in the organization.

“When I joined, I had little training time, little fighting time in Brazil and I learned everything within the organization. I was improving with each fight, and I hope to evolve and grow more and more and show even more.”

While there is a lot about Brazil that she misses — family, friends, her animals, and the general vibe of her home country — the former strawweight champion and all-around female standout knows that her move to Las Vegas and her work with the Performance Institute have already begun to contribute to that continued growth and evolution.

“I always like to tell the guys, ‘Whoever trains here gets to adapt to the climate, to the dryness, to the heat,’” Andrade said of living and preparing in Las Vegas. “If you prepare here, you will fight well anywhere in the world. 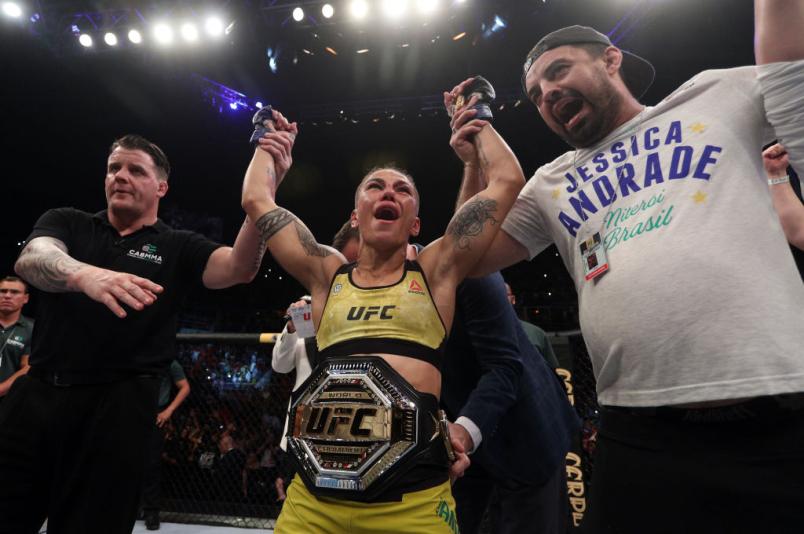 Jessica Andrade of Brazil celebrates after her knockout victory over Rose Namajunas in their women's strawweight championship bout during the UFC 237 event at Jeunesse Arena on May 11, 2019 in Rio De Janeiro, Brazil. (Photo by Buda Mendes/Zuffa LLC/Zuffa)

“My physical side is much improved; the work we have done with the nutritionists at the PI has done wonders. I'm actually supplementing properly now that I am in the United States, something I had never done while in Brazil, and I'm eating much healthier.

“I think we are still in the early stages. I will improve a lot more by being here.”

And she expects to show those improvements against Lemos this weekend.

“I believe the fight will have a little bit of everything: groundwork, fence work, and lots of striking, lots of action,” Andrade said, offering her thoughts on how things could play out with Lemos in Saturday’s finale. “I hope it's a good fight, right? That she gives her best because I always go in to give my best, and don't let the judges decide the main event.

“We have to put on a show for the people who will be there watching, so I hope it happens the best way possible, that no one gets seriously injured, and we can have a great match and put on a great fight.”

As for what comes next, first is a little vacation, but then Andrade will be back on the grind, helping her teammates get ready for their upcoming fights and keeping herself in a position to jump into the fray whenever the UFC calls, regardless of division.

And if things go the way she hopes, Andrade will get to work her way back to the top of the division and potentially challenge for championship gold in 2023.

“I know I was away for awhile and I need to earn my place in the division again, and I am ready and willing to face whoever to get back to the top,” said Andrade. “This division is amazing and there are a ton of fantastic matchups I could have while climbing my way back to the top.

“If the UFC needs me, I will be ready,” she added. “I would love to fight three times this year, doesn’t matter the weight class. If I don’t get calls at other weight classes, then at strawweight, I think one or two more fights this year, climb the ranks, and who knows, maybe a title fight next year?”