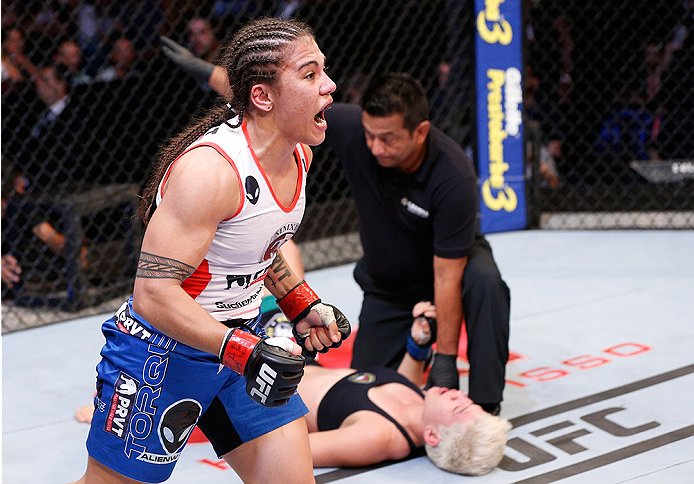 With the highly-anticipated championship bout between Ronda Rousey and Cat Zingano quickly approaching and a slew of top-ranked fighters lobbying for the opportunity to step back into the Octagon, the UFC women’s bantamweight division has been thrust into the spotlight.

A few weeks back, Miesha Tate battled through a broken orbital bone to grind out fellow former title challenger Sara McMann. At the post-fight press conference, she was already angling for her next fight. Canadian Sarah Kaufman extended a challenge by smashing a cupcake with her fist on Instagram, but rather than being paired with Tate, the Victoria, British Columbia native was lined up alongside fellow Canuck Alexis Davis at UFC 186 in Montreal.

Liz Carmouche has been lobbying for a chance to snap her two-fight losing streak, TUF winner Julianna Pena is poised to return and newcomer Holly Holm finally makes her UFC debut against Raquel Pennington one fight before Rousey defends her title against Zingano at UFC 184 in Los Angeles.

Add in Jessica Eye and Bethe Correia, both of whom are certain they’ll be the one to dethrone Rousey, and you have quite the collection of talented females pressing for bigger opportunities and their chance to shine.

While everyone else is queuing up to state their case for a step up in competition and a shot at the champ, Jessica Andrade is happy to just keep doing her thing in the shadows.

After falling to Carmouche in her short notice UFC debut, the 23-year-old Parana Vale Tudo representative has rattled off three straight victories to climb to No. 10 in the rankings. Most recently, the diminutive Brazilian powerhouse handed prospect Larissa Pacheco her first professional loss, forcing a tap with a nasty guillotine choke before an electric crowd in Brasilia as part of the September UFC Fight Night event.

Riding a three-fight winning streak and coming off a dominant first-round finish, Andrade has a better case than most for a step up in competition and a chance to move up in the rankings, but the Umuarama native is content to continue improving, keep piling up wins and wait her turn.

“The experience has been amazing,” Andrade said through her translator Tiago Okamura of her time in the UFC to date. “Every day that passes, every fight that goes by, I feel better, more well prepared and more confident in my work. I feel like I have been constantly evolving both on the ground and in my stand-up. I feel like slowly things are falling into place and although I still have a lot to learn, I know now that I can put on a good fight against anyone in the division.

“Unlike many of the girls in the division, I know my place in the division and at the moment it really is not in a title fight,” she added. “I’m still not where I would like to be for a big fight like this and I´m happy to wait and keep working until I’m ready for that. Everything in life has its time and I have no problem waiting for mine.”

Though she’s willing to wait for bigger opportunities to come in the future, that doesn’t mean that Andrade is content to sit on the sidelines and stagnate. Sunday night, the emerging contender returns to action, looking to join Rousey as the only fighters in the division with four wins inside the Octagon when she takes on aggressive newcomer Marion Reneau in the final preliminary card bout of the evening.

Facing an unranked opponent with just a single UFC win under her belt wasn’t exactly the matchup Andrade was expecting, but the compact Brazilian whose nickname “Bate Estaca” translates to “Piledriver” believes the UFC has a plan for her and that Reneau will become the fourth straight opponent she’s turned back this weekend in Porto Alegre.

“I believe the UFC is getting me ready and testing me slowly to allow me to grow in the division,” she said. “If I could fight someone better ranked it would be great, especially since soon the rankings will make a lot of difference in our fight income, but at the moment I’m happy where I am. I’m young, I have time, and I feel I’m still far from my peak, so there is no reason to rush things.

“We watched (Reneau’s UFC debut) live knowing the winner could very well be our next opponent. She is quite technical on the stand-up and she seems very strong. We are aware her ground game is quite good too even though she didn’t have a chance to show it in this match. But I’m very confident in the work of my team and with the right game plan, I can get my fourth victory in the UFC.”

After beginning her UFC career on fight cards in Seattle, Manchester and Dallas, Saturday’s contest marks Andrade’s second straight opportunity to step into the Octagon in her home country and in front of the raucous and supportive Brazilian fans.

It’s an opportunity she enjoyed the first time around and one she doesn’t take lightly, which has the patient, but feisty, fighter focused on putting on a show and chasing a bonus when she shares the cage with Reneau this weekend.

“It was amazing getting a chance to fight in Brazil,” Andrade said of her September bout in Brasilia. “The fans here are very different from the other places I have fought and that makes the experience quite pleasant. Winning quickly was also very good; I believe it shows I’m constantly improving and I will be even better for my next one.

“Marion is very versatile, so it’s tough to predict where we will take the fight, but wherever it goes, I know we will keep a high pace and put on an entertaining match for the fans,” she added. “Winning a Performance or Fight of the Night bonus would be great too. This is my fifth fight and I think I came close before; maybe this time I can do enough to earn one of those.”