Jessica Andrade: Pioneer in Her Prime

"You can expect a very fun fight on the 13th. I’m going to hunt Larissa in the Octagon and I’m pretty sure she will be trying to do the same to me." - Jessica Andrade 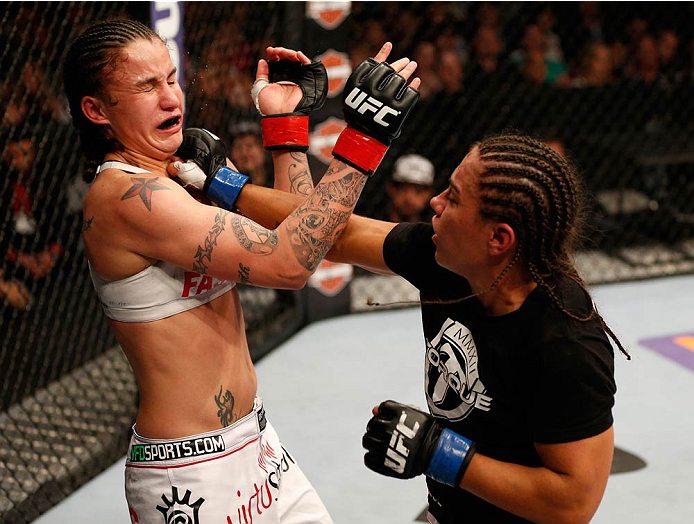 Tenth-ranked UFC bantamweight Jessica Andrade may have been the first Brazilian woman to compete in the Octagon, but she certainly wasn’t the last, as the floodgates have been opened for several talented young ladies who have done their nation proud since 2013. And no one is happier about this turn of events than Niteroi’s “Bate Estaca.”

“I believe that the Brazilian people must be proud of all the girls that are getting into the UFC and doing well here,” Andrade said through translator Tiago Okamura. “I’m pretty sure that much like in the men’s divisions, we will eventually have a Brazilian champ among the girls.”

Brazil’s reputation for placing their fighters on top of the MMA mountain is well-deserved, and with the likes of Andrade, Amanda Nunes, Bethe Correia, Claudia Gadelha, Juliana Lima and Andrade’s opponent this week in Brasilia, Larissa Pacheco, all leading the ladies’ charge, expect to see the Brazilians’ Wall of Fame gain some new names. It’s not a race to the finish though, at least not for the 22-year-old Andrade.

“I don’t know about the other girls, but I never really cared much about someone else getting more attention than me; my concern has always been to be the best I can be,” she said. “I was very happy to see a girl like Larissa getting her chance after being a top prospect for so long. We are all professionals and eventually all of us are bound to have to fight each other, but as long as we are respectful towards each other, it’s all good.”

It’s a refreshing attitude and one you don’t see too often in any sport. But according to Andrade, feeling this way comes from an idea that more than being different, the Brazilian fighters are a lot alike.

“I believe every Brazilian carries within them a lot of willpower,” she explains. “We as a nation are always faced with many, many problems, from infrastructure to health to schooling, so in the end we are bred to deal with problems and to make the best of what we have, and the same goes for our fighters.”

Andrade has proved her toughness and ability to deal with adversity in the Octagon, bouncing back from a debut loss in 2013 to Liz Carmouche to defeat Rosi Sexton and Raquel Pennington in successive bouts. On paper, this is Andrade’s fight to win or lose against the unbeaten yet untested Pacheco, but the 135-pound contender isn’t about to get caught napping on fight night.

“I never underestimate any opponent,” Andrade said. “I believe that my opponent and I share a very similar style of fighting. We both are able to withstand a lot of punishment and dish it out as well. Like myself, she is only a blue belt in jiu-jitsu, so overall we are very similar.”

Does that mean the Muay Thai maven is hinting at a stand-up war with Pacheco? Andrade, an exciting volume striker, probably wouldn’t mind that scenario, but without showing her cards, at the very least she expects a fun fight for those watching.

“You can expect a very fun fight on the 13th,” she said. “I’m going to hunt Larissa in the Octagon and I’m pretty sure she will be trying to do the same to me. I will do my best, I had a very good camp for this match, and I believe that every fight that passes I am becoming a better fighter. Maybe we can get a Fight of the Night out of this.”

That would be a nice way to kick off Saturday’s main card, but at this point Andrade knows the most important thing for her career is to win, because with a victory, she will likely make that move into “Ronda Range,” aka the bantamweight title picture, even if she isn’t sure that beating the debuting Pacheco will do the trick.

“The ranking system is not an exact science, so how a win over someone not ranked would affect my placement is unknown,” Andrade said. “Bethe (Correia) just beat Shayna (Baszler), who was making her UFC debut, and she got to go one spot over me, so you never know.  I would like to eventually get a crack at the belt but not now. I’m very much aware of my potential and my limitations and I know that in order to put on a good fight with Ronda I need more time to improve.”

Again, with an approach to the sport like that, it’s impossible to not want to cheer for Andrade, who is in a much different place now than she was a little over a year ago. Back then, the question was whether she was ready to hang with the best in the world. These days, she is one of the best. That’s some year.

“I have to say this was a blessed year in my life,” she said. “We conquered many things and achieved many dreams in this one year in the organization (UFC). I was able to meet many people and visit many places I have never thought I would get a chance to see in my lifetime. This only gives me more motivation to train hard so I can put on great performances for the fans, and by doing that I can help my family and my team.”