Jessica Andrade: The Mind of a Finisher

"The only way to make sure you win a fight is to get a finish. This is what we are taught from day one at Paraná Vale Tudo." - Jessica Andrade 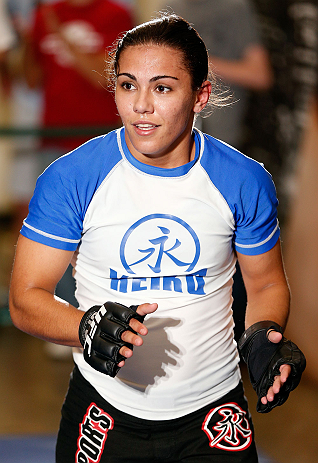 The “Piledriver” has gloves and will travel, anywhere.

If her moniker wasn’t already so cool, UFC women’s bantamweight Jessica Andrade might consider a nickname change to the “Frequent-Flyer Fighter.” Already in 2013, the 22-year-old from Umuarama, Brazil has fought three times in three different countries in three different time zones, and is ready to lace them up one more time to add a fourth to the list of each at UFC Fight Night: Machida vs. Munoz.

“This year has been an awesome year,” declares Andrade. “Having the experience of seeing other countries and other cultures was something very new to me. Some people say that ‘13’ is an unlucky number, but, for me, it has been the best year of my life: a year of happiness, opportunities, and blessings. It was the year I officially joined Paraná Vale Tudo and they have changed my life.”

It all started in January with a rear naked choke win in Rio. Three months later, “Bate Estaca” (which translates to “Piledriver” from Portuguese) took her sub stoppage show on the road to Rostov-on-Don, Russia for Andrade’s first fight outside of Brazil, which resulted in another tap via (guillotine) choke victory. The back-to-back submission wins caught the UFC’s attention, and soon enough Andrade would make her Octagon debut, but she could not have guessed who it would be against or on such a big stage.

Young, fairly inexperienced, with only one bout outside of her native Brazil, and Andrade was set to take on former #1 contender Liz Carmouche live on FOX in Seattle, Washington.

“It was a great opportunity to arrive in the biggest MMA show on Earth right into the top of the rankings,” tells Andrade. “If I was to beat Liz, I would have certainly been in line for a title shot soon. I think I did OK in the first round because of the guillotine choke. But I was very nervous and kept insisting on it. Because of that, my arms were shot for round two. I wasn’t able to show my full potential in that match. We had a good game plan for it and I was doing everything right in my camp, but when it came time to fight, I did absolutely nothing I was supposed to do. Had I been able to implement what we set out to do, I'm certain the result could have been different.”

Originally, the “Girlrilla” was scheduled to tangle with former Strikeforce women’s bantamweight champ Miesha Tate, with the two vying for another shot at UFC women’s bantamweight boss Ronda Rousey. As it worked out, Cat Zingano got injured and could not coach The Ultimate Fighter against Rousey, which caused Tate to get promoted and left Carmouche without a dance partner. The butterfly effect resulted in Andrade trading takedowns with Carmouche followed by a choke attempt by Andrade in the first round and getting ground and pounded by the former world title challenger en route to a TKO loss near the end of the second stanza.

“I learned that I do have good potential,” says Andrade. “Considering I did not implement anything I was supposed to do, I think we did all right. I know I need to develop myself mentally and physically in order to hang with the top girls and we are working a lot on that. My team, Paraná Vale Tudo, is giving me all the support I need to reach my goals. Now that the debut is gone, I think my mindset will be a lot better for this match than it was for the Carmouche one.”

At 9-3 in only two years as a pro fighter, Andrade has shown more than simply “good” potential. The 5’2” competitor has won all of her fights by finish - four via punishing punches, four by guillotine chokes, and one by rear naked choke - with the majority of those coming in the first round. Andrade comes forward and often with her fan-friendly fight style and has a zero quit switch. With so many more fights ahead of her than behind, plus training with a true professional fight camp, Andrade has the ability and the structure needed to evolve into the fighter that she wants to be.

“I think I have a LOT to learn, especially about myself,” explains Andrade. “Each year that passes, I see that all the work of my team has had great results and will give many more in the coming years if God allows. I think the main thing I have learned is that if you want something really bad and you work hard and always move forward you can achieve it. A lot of people will be around trying to put you down when you are trying to achieve something great, but you can never let them get into your head and bring you down.”

Up next, more caged combat against a new opponent in a new country as Andrade clashes with veteran grappler Rosi Sexton at UFC Fight Night in Manchester, England. The 13-3 hometown heroine is both a trailblazer in women’s MMA, with fights dating back to 2002, and the most highly-educated member of the UFC roster, with a PhD in Theoretical Computer Science from the University of Manchester. Training at Manchester’s Next Generation gym, Sexton made her debut in a hard-fought decision loss against Alexis Davis at UFC 161, and now will bring her ground game expertise into the Octagon against Andrade.

“I think my opponent is very strong and has a lot more experience than me,” reveals Andrade. “We have pretty different styles. She works very well from the top and has good submissions. I guess I will have to avoid that and try to work on my bread and butter.”

It takes a village to raise a child and it takes a team to train a fighter. For Andrade the village is Rio and the team Paraná Vale Tudo. In preparation for Sexton, Andrade is happily putting in hours with her crew of coaches and teammates Master Paraná, Master Baioneta, Elder Lara, Francisco Cylderlan Lima da Silva, and Denison Silva. For strength and conditioning, Andrade is put through the ringer at Centro de Treinamento Personalizado (CTP) by Marco Aurelio, Luciano Brazil, and Lucas Rodrigues. All the above, combined with Andrade’s natural bullish warrior spirit, is what makes her the tough fight finisher that the UFC was impressed with and wanted to feature inside the Octagon.

“I think my willpower is what drives me forward,” states Andrade. “I am not one to give up. When you let the fight go to the judges you take your future and you leave it in the hands of someone else. The only way to make sure you win a fight is to get a finish. This is what we are taught from day one at Paraná Vale Tudo. If you leave it to the judges, you might get your victory taken from you, so you better make sure it doesn't go that route. I’m a fighter who will always walk forward, be aggressive, and try to finish as quick as I can. I can take plenty of punishment and will not choose opponents nor give up in a fight.”

This weekend, “Bate Estaca” and “The Surgeon” will collide in hopes of making the other the first notch on their Octagon winning record. “I would say to the fans, please watch this match, as you will see a different Jessica than you saw in Seattle,” asserts Andrade. “I hope I can show with each fight that this short kid can go far and, hopefully, in this next match I can put on a great show for you guys. You guys can be sure that I will go in there and will leave everything in the Octagon. I will not give up and I will be looking for the finish.”