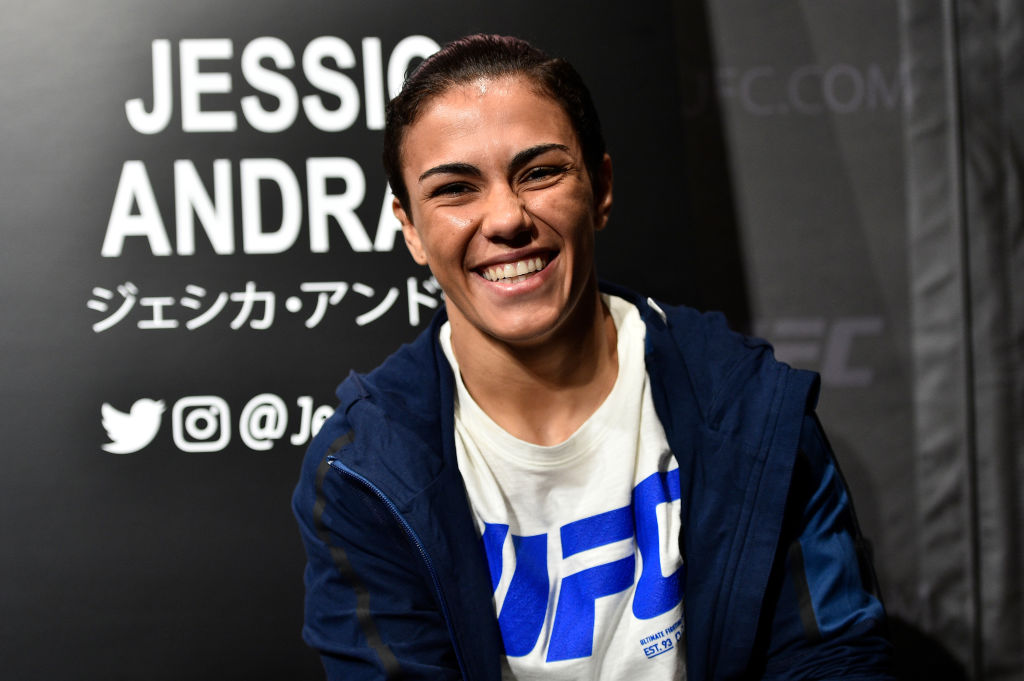 Jessica Andrade of Brazil interacts with the media during the UFC Ultimate Media Day at the Park Hyatt on 9/20/17 in Tokyo, Japan. (Photo by Jeff Bottari/Zuffa LLC)" align="center" />The last 18 months have been a whirlwind for Jessica Andrade.

Following a seven-fight run in the bantamweight division, the Brazilian relocated to the strawweight ranks, where her diminutive stature no longer gave her opponents an immediate advantage. Within minutes of her divisional debut, it was clear that the power she exhibited in the first phase of her UFC career had carried over to her new weight class.

After an eight-minute drubbing of former title challenger Jessica Penne, Andrade had instantly established herself a contender.

A quick submission win over Joanne Calderwood followed at UFC 203 before the powerhouse whose nickname, “Bate Estaca,” translates to “pile driver” in English, went toe-to-toe in a Fight of the Night winning victory over former Invicta FC strawweight titleholder Angela Hill to earn a shot at championship gold.

“It was a chance to be on the biggest stage possible in my division,” said Andrade of her title clash with Joanna Jedrzejczyk at UFC 211 in May. “I came up short this time, but I see myself as someone who will eventually get another title shot and I will make the most of it when it comes.

“I think it was okay,” she said of her performance against Jedrzejczyk, where she came out on the wrong side of a unanimous decision verdict. “For sure I could have done better. 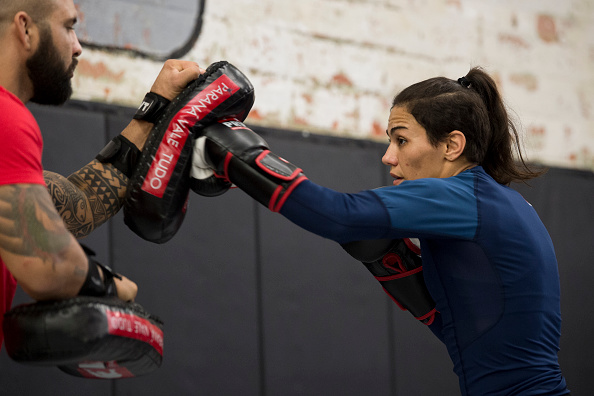 “I didn’t really stick to a lot of what we had planned and I also paced myself too much. I know now that it’s possible for me to do five rounds at full pace and this is something I will do the next time I have a chance to do a five-rounder.”

Though she failed to come away with UFC gold, Andrade’s weekend in Dallas was far from a complete loss as the 25-year-old proposed to her long-time girlfriend. Naturally, she said yes.

“Things are going pretty well,” Andrade said of the wedding plans. “We are looking at getting the ceremony done next year, around July.”

Before returning to picking out flowers and color schemes, the strawweight standout will return to the Octagon to face fellow Brazilian contender Claudia Gadelha in a matchup poised to steal the show this weekend in Saitama, Japan.

Though both have already shared the cage with the reigning champion, Saturday’s penultimate pairing remains a pivotal contest in the 115-pound ranks. Gadelha has earned back-to-back victories since her last encounter with Jedrzejczyk and has seemingly taken her skills to the next level since shifting her training to Albuquerque, New Mexico. 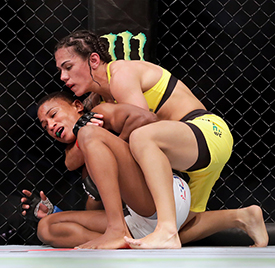 UFC Fight Night at the Toyota Center on February 4, 2017 in Houston, Texas. (Photo by Tim Warner/Getty Images)" align="right" />While this will be Andrade’s first appearance since her championship loss in May, a win over Gadelha would hasten her return to the short list of contenders swirling around the top of the strawweight division.

“It made sense,” she said of the matchup with Gadelha, who scored a first-round submission win over Karolina Kowalkiewicz in her most recent appearance back in June. “No one is really looking forward to facing either of us, so we might as well get this over with.”

Moving ahead at the expense of another Brazilian has been something elite representatives of the proud fighting nation have sought to avoid whenever possible in the past, but for Andrade, Gadelha’s move to the United States removed any hesitation she may have had about facing one of her countrywomen inside the UFC cage.

The way she sees it, there is only one person representing Brazil this weekend.

“Claudia left her camp and left the Brazilian scene to go live in the United States,” she said of her opponent, a long-time Nova Uniao staple who now works with Chris Luttrell and Ray Yee in the hardscrabble fighting capital of the Southwest. “To me, it’s like facing an American opponent. The one representing Brazil and our scene will be me.”

In addition to getting the opportunity to face an elite contender, the chance to fight inside the famed Saitama Super Arena appealed to Andrade, as the venue was the site of many great triumphs for legendary Brazilian fighters over the years. 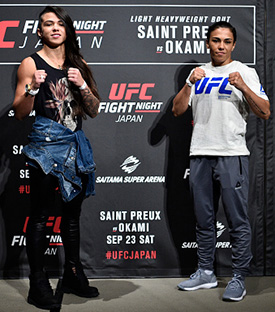 This weekend, she plans on following in the footsteps of luminaries like Wanderlei Silva, Antonio Rodrigo Nogueira and Shogun Rua who have starred there in the past by pairing with Gadelha to steal the show and come away with the biggest win of her career.

“It’s such an iconic venue,” said Andrade of the former PRIDE home. “Most of Brazil’s MMA legends fought there and I will go there and make them proud.

“It’s a very exciting fight and I know we can bring in a Fight of the Night performance,” she added in regards to the matchup with Gadelha. “I believe I will be able to hurt her on the feet and hopefully one will put her out.”