Brazilian Flyweight Hopes To Be The Newest Fighters To Hoist Gold In Different Divisions
By E. Spencer Kyte, on Twitter @SpencerKyte • Apr. 21, 2021

Saturday night in Jacksonville, Florida, Jessica Andrade will look to make history as the former strawweight champion squares off with Valentina Shevchenko in the first of three consecutive title fights scheduled to close out an action-packed evening at UFC 261.

If successful, Andrade would not only become the first to defeat Shevchenko at flyweight, but only the second fighter to best her inside the Octagon, the first, fittingly, being Amanda Nunes, who was also the first to accomplish another milestone the 29-year-old challenger is looking to reach this weekend.

With a win on Saturday, Andrade would join Nunes as only the second female fighter and eighth competitor in UFC history to hold championship gold in two different weight classes. She is just the 24th fighter in history to even challenge for a title in two divisions, joining standouts like Frankie Edgar, Demetrious Johnson, Holly Holm, and the woman she faces this weekend in accomplishing that exclusive feat.

Not bad for someone that reached the UFC with less than two years of MMA experience under her belt.

“It has been a crazy ride,” said Andrade, reflecting on her nearly nine-year, 18-fight UFC career. “I came from a very small countryside town. I went from barely any martial arts training to debuting in MMA and within two years, I was fighting for the UFC with my face on the poster in Times Square.

“Things happened very quickly and I was lucky to have good people around me to help me grow and learn on the job. Never in my wildest dreams have I ever thought I would accomplish what I was able to accomplish, and I am very grateful to all involved that helped me get to where I am now.”

Because she has been a staple on the roster for the better part of the last decade — and a fixture in the championship conversation five years — it’s easy to forget the road Andrade has taken to arrive at this weekend’s flyweight title fight.

Her promotional debut came on short notice in Seattle, Washington, where she replaced future bantamweight champ Miesha Tate in a main card showdown with Liz Carmouche, who was five months removed from being the first woman to step foot into the Octagon and her UFC 157 title fight with Ronda Rousey.

Standing next to her during media availabilities that week, it was incomprehensible how such a diminutive figure could fight in the bantamweight division, but the shy, ponytailed Brazilian exhibited her trademark relentlessness and tenacity that night and throughout her seven-fight stint in the 135-pound weight class, cobbling together a 4-3 record despite being undersized.

“Sometimes being thrown in water can be a good thing; you sink or you swim,” Andrade said of the first chapter of her UFC career. “I was able to swim and get better and better.

“Fighting at 135 pounds was never ideal, but I was able to do okay there, was even ranked at that weight class, so I was in a good position. But that was never the ideal place for me to be in.”

In the summer of 2016, Andrade made her debut in the strawweight division, bulldozing her way through former title challenger Jessica Penne to instantly announce her presence as a threat in the 115-pound weight class.

Two additional victories resulted in a championship opportunity at UFC 211, where she came up short against Joanna Jedrzejczyk. Three more wins, including a hellacious first-round knockout of another former title challenger, Karolina Kowalkiewicz, re-established Andrade as the top contender in the strawweight ranks, landing her opposite the division’s new ruler, Rose Namajunas.

Before a partisan crowd in Rio de Janeiro at UFC 237, Andrade rose to the top of the strawweight ranks, claiming UFC gold with a second-round stoppage victory over Namajunas.

She would lose the belt to Zhang Weili a little more than three months later, then dropped a split decision to Namajunas in their rematch, dominating the final frame and carrying all the momentum when the three-round affair ended.

Temporarily bumped from the title picture after consecutive losses, Andrade opted to embark on another move, relocating to the flyweight division, where she once again debuted in spectacular fashion.

“Originally we took the move to flyweight because it was against Jessica Eye, who was someone I knew from back when I was at bantamweight and was an opponent I thought I matched well with,” explained the 29-year-old, who went 7-3 in 10 strawweight appearances. “She was highly ranked, but I believed I would need another win probably to get to the belt.

“When it changed to Katlyn (Chookagian), things changed a little and I was fast-tracked to the title fight.”

It wasn’t simply the fact that she was facing Chookagian, who was then and is now positioned at No. 2 in the divisional rankings and was only one fight removed from challenging for championship gold that instantly inserted Andrade into the title conversation; it was the performance Andrade turned in.

Deploying her trademark marauding style, the powerful dynamo dropped and finished Chookagian with a punishing body shot late in the first round, making it immediately clear that additional victories were not needed before penciling her in opposite Shevchenko.

“At bantamweight, I was trying to survive in the event — taking one fight at a time and not looking too forward as I was so early in my martial arts journey,” began Andrade, tracing her road to Saturday’s meeting with Shevchenko through the different stops in her UFC career. “Looking back, I was undersized and also very inexperienced compared to the competition, but I did all right. 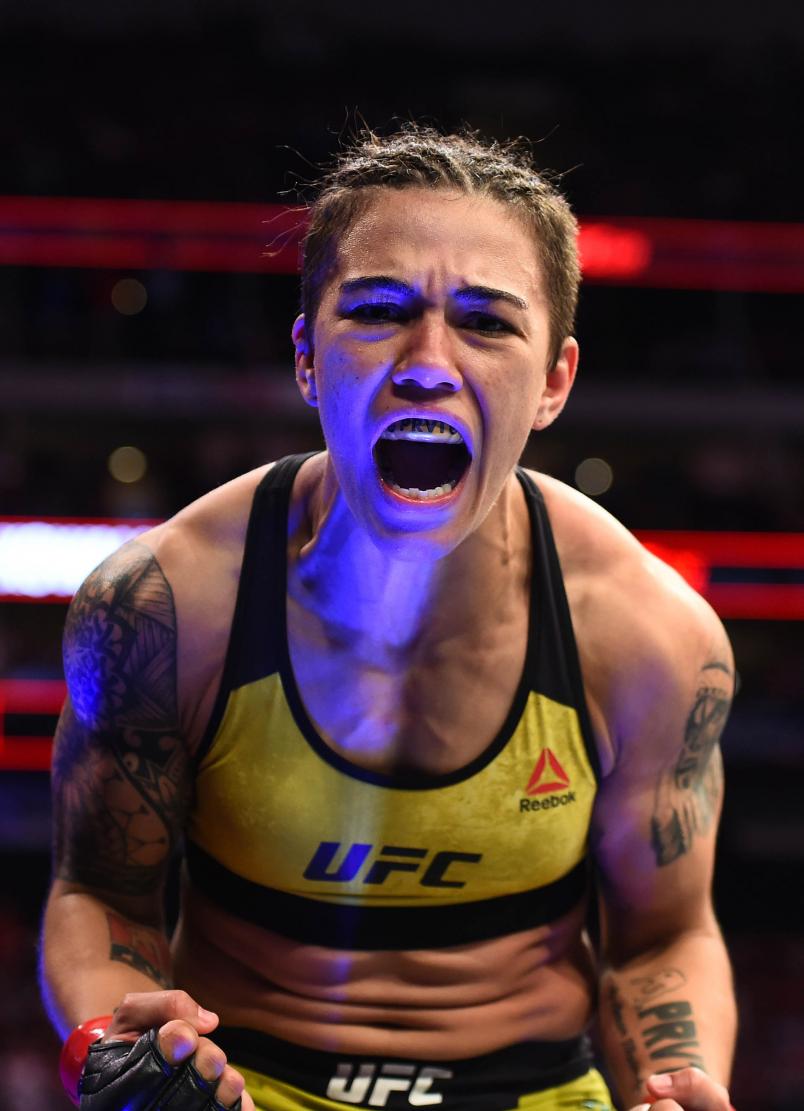 Jessica Andrade of Brazil celebrates after knocking out Karolina Kowalkiewicz of Poland in their women's strawweight fight during the UFC 228 event at American Airlines Center on September 8, 2018 in Dallas, Texas. (Photo by Josh Hedges/Zuffa LLC/Zuffa LLC via Getty Images)

“At strawweight, I already had three years experience competing with some of the best in the world and had already been able to get some more structure in my personal and professional life. I was making more money, which means I was able to invest more in myself, and my development as a fighter.

“At bantamweight, I was already pretty confident, but when I was facing girls my own size, that went through the roof and made all the difference in my performances and in how I looked at the sport,” she continued. “Now at flyweight you are seeing the happiest version of me; I don't have to cut much weight, so I can focus on training and improving. This was the main weight class I competed in before entering the UFC and it is the one I believe I can have the most longevity in.

“Getting to flyweight was a breath of fresh air,” Andrade added. “It gave me a level of happiness, especially on fight week, that I haven't felt in years, and when I'm happy I am very dangerous.”

As happy and dangerous as she may be — and the Brazilian powerhouse is, in fact, both — Andrade is fully aware of the challenge she’s facing when she steps into the Octagon with Shevchenko on Saturday night.

“I have watched Valentina for a long time,” began Andrade, discussing the champion’s repertoire and what her best path to victory may be this weekend. “Back when she was still competing in Peru, we had some teammates fighting at the same events.

“She has always been a very complete fighter. Even though she is a Muay Thai fighter, you know that even in Muay Thai she was never a very traditional Muay Thai fighter; she used a lot of clinches and throws even there.

“On paper, the best route would be to do something like Jennifer Maia was able to do in one round of their fight,” continued the challenger, citing her countrywoman’s efforts to close the distance, work from the clinch, and take the fight to the canvas when she faced Shevchenko at UFC 255. “If I can get close, I know I can take her down and work from top position.

“But in a five-round fight, I have 25 minutes to connect my hands, so even if the fight is entirely on our feet, I still believe I can hurt her there.” 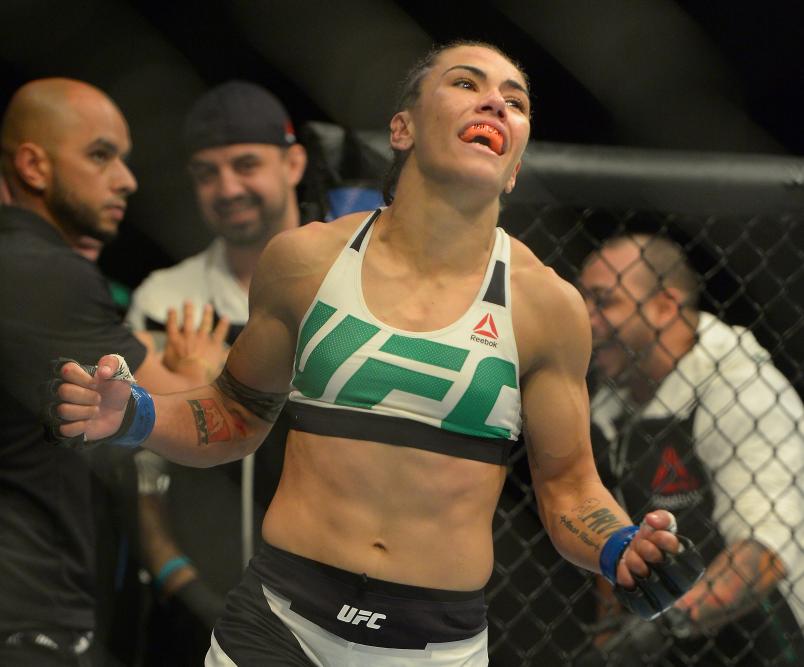 No one is disputing that possibility, and if Andrade is able to “connect her hands” and halt Shevchenko’s six-fight winning streak, she’ll etch her name in the history books, elevating her status in the hierarchy of all-time greats.

But perhaps most importantly for her, it would highlight the efforts of her team at Paraná Vale Tudo.

“I believe it would really put me in the (upper echelon) of MMA fighters in history, especially for someone who got into the UFC with only two years of martial arts experience,” she said. “It really would be a great testament to my career and the work we have done.

“It would once again prove that I am among the best in the world and prove that the work we are doing back home is effective,” she added. “Even after winning the strawweight title, there are still people who discredit the work we have at PRVT, and I believe this win would be a major stamp of recognition for me as an athlete and to my team.”

There is line in the Kanye West track “Diamonds From Sierra Leone” where ‘Ye questions, “If you talkin’ bout classics, do my name get brought up?”

Right now, Andrade’s name isn’t one that instantly jumps to mind when discussing the greatest female fighters in UFC history, but with a victory on Saturday night, that should change.

So how does she envision making sure her name gets brought up in those conversations?

“She will probably try to run circles on me for a round,” she said, beginning her assessment of how the fight will play out. “I will work on hurting her as much as I can in the first, maybe second, so that by the third round I can catch her, take her down, and from there, look for the finish.”

But if she’s successful on Saturday night, “The Ballad of Bate Estaca” will become a UFC classic.