"Yes, I’m growing up in public and cutting my teeth in the fight business
at the top of the sport. There’s nowhere else higher than the UFC and
I’m basically learning there." - Jessamyn Duke 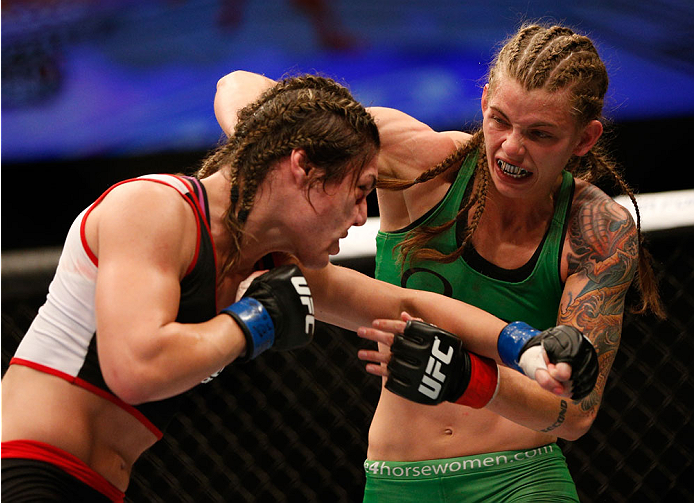 The mourning period is over for Jessamyn Duke. A little less than three months after the first loss of her professional career to Bethe Correia in April, the bantamweight prospect has moved on. She hasn’t forgotten the defeat as she approaches her Wednesday meeting with Leslie Smith in Atlantic City, but she isn’t letting it define her either.

“You’re wounded after a loss,” said Duke. “You’re a little more tender, you’re a little more sensitive to everything, and after a couple weeks you remember that this loss doesn’t define me, it’s not the end of the world, I’m still the fighter that I was, and now I can handle the heat a little bit better after having some time to lick your wounds and get back to who you were.”

That doesn’t mean the process is easy.

“It’s kind of like a death,” she explains. “You go through your grieving period and then your mourning period, then you get over it and you go back to what makes you feel like a normal person, and that’s training. So that’s what I did. Usually I hole up for a couple days and let it soak in and really think about things. No one’s harder on me or more critical of me than I am of myself. So I spent a lot of time reflecting on what went wrong and why because I hate losing. It’s the worst feeling. I’m a super competitive person and I do everything in my power to avoid it because it’s pretty unpleasant.”

It may be even more unpleasant now thanks to social media and Duke’s high-profile standing in the UFC women’s bantamweight division. That means torrents of abuse for any loss or misstep, and really nothing any athlete – or any human being for that matter – should be subjected to. Luckily, her team banned her from social media for two weeks after the fight.

“It’s hard to read it,” said Duke. “People are brutal. You’re not a person to them. You’re something else to them. You’re an event, you’re entertainment, and it’s a hobby for some people to go online and troll you. You can’t take it too personal, but it helps to just not see it so it doesn’t eat at your brain too much. But one good thing about it is that you find out who your real fans are and who your fair-weather fans are. Some people will only like you when you’re winning, and that’s fine; they’re entitled to their opinion and we want them to watch the sport as much as anybody else. But some people will love you just because of the fighter that you are or who you are as a person. You have to just to stay focused on that stuff and not get too bent out of shape over the other people.”

The sad part of the whole scenario for the 28-year-old Duke is that she didn’t get outclassed or blown out by Brazil’s Correia. You wouldn’t even be out of line if you thought she won the three-rounder at UFC 172 in Baltimore. Duke and her corner certainly did, even though she admits that it wasn’t her best performance.

“I thought I won, I thought I had it,” she said. “I knew it was close. She threw more haymakers, but I thought I did more damage and had the more accurate striking and I thought I dictated where the fight went with the takedowns. Not all of them stuck, but I either put her back down or we went back to striking. I felt like I controlled the fight more. I was never in danger, I threw on a couple submission attempts and I know I stunned her once with an elbow. I thought I’d squeak out a decision. That’s not the way I want to win a fight, but you can’t always get exactly what you want, and I did think I’d won, but I didn’t.”

Duke surprisingly was shut out on two of the three scorecards, with the third verdict reading a more reasonable 29-28. It wasn’t an easy pill to swallow, but she can pinpoint why she wasn’t at her best that night.

“She has a very weird pace,” said Duke of Correia. “She was not nearly as aggressive as I thought she was going to be. She was very hesitant, and it made me start waiting on her. She sucked me into this pace that she was in and we were just exchanging one or two strikes here and there and I could never get any momentum going. It was weird and something I had never really experienced before. It was like a sparring match almost. It never really escalated past that. I fell into this weird role during the fight and I attribute it to lack of experience. It did help me a lot though.”

The time since then has been spent in the gym dealing with such issues, sewing up the holes in her game, and getting ready for the veteran Smith, who one assumes Duke won’t have to look to hard to find this Wednesday.

“She’s quite capable, and almost every time I’ve seen her fight, it’s been Fight of the Night,” said Duke of her foe. “Leslie has one speed, and that’s one hundred percent. She’s not the most technical fighter, she’s not the biggest fighter or strongest fighter, but she will fight one hundred percent from bell to bell, and she doesn’t stop. That’s definitely something that will be good for me.”

What Duke means by that is that against Smith, she’ll get a chance to let her hands go and show why she’s a top 135-pound prospect. If she pulls off the win and gets back to that place where the online haters love her again, it will be another lesson in the education of Jessamyn Duke, a young lady who’s done a pretty impressive job of handling the always dicey proposition of growing up in public.

“I can’t be anything other than myself,” she said. “I am where I am in my career, experience wise, and I’m going to screw up sometimes and have great victories sometimes, and I hope that my fans can appreciate that aspect of my career, but it’s out of my hands. Yes, I’m growing up in public and cutting my teeth in the fight business at the top of the sport. There’s nowhere else higher than the UFC and I’m basically learning there. That’s just the way it is, those are the cards I was dealt and I can’t offer anything else on fight night other than exactly who I am.”