"I’m really excited to show everybody the things I’ve been working on and
I have a goal. I said it last time and I’m saying it again: I’m going
to knock someone out." - Jessamyn Duke 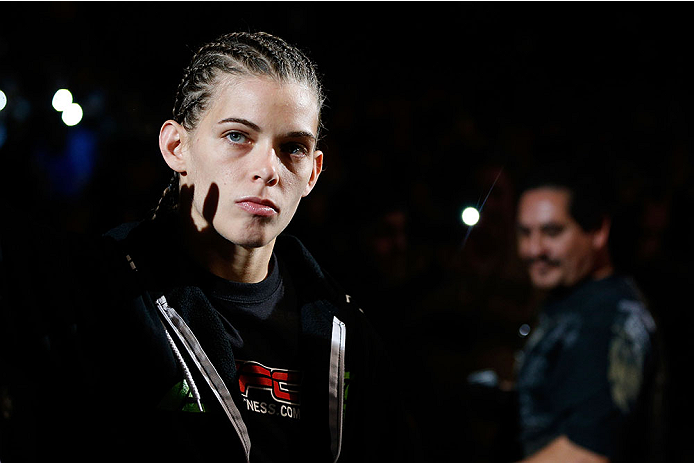 Setting goals is important in any walk of life. Approaching her second fight in the UFC this Saturday against Bethe Correia, Jessamyn Duke agrees, but her goal is a singular one.

Those are fighting words, but with a hashtag of #dontplaywithguns making its rounds on Twitter, “The Gun” isn’t backing down from what she expects to be a defining performance this weekend in Baltimore.

“In my opinion, this is my first real fight camp with the team out here,” said Kentucky’s Duke, who has found a new home in Southern California with coach Edmond Tarverdyan and three roommates you may have heard of. In fact, Duke, Ronda Rousey, Shayna Baszler, and Marina Shafir have become so inseparable in the gym and out of it that they’ve dubbed themselves The Four Horsewomen. And while her work out west the first time resulted in a decision win over fellow Ultimate Fighter castmate Peggy Morgan, the time between that November bout and now has given Duke even more confidence.

“When I came out last time, I had eight weeks and we just blasted it out,” she said. “But now that I’ve had a few months, I’ve had time with my team to grow and evolve and learn, and then I had time for a full camp and I’m settled in so much more. I’m really excited to show everybody the things I’ve been working on and I have a goal. I said it last time and I’m saying it again: I’m going to knock someone out. I’m going to drop someone with one shot; it’s not going to be a TKO. That’s my goal. And I’ve yet to set a goal for myself and not get there, so I feel like this one’s no different.”

At 5-foot-11, Duke is an imposing figure among the 135-pounders. Brazil’s Correia, at 5-foot-5, will have some work to do to get inside on her opponent and put things on more even terms physically, but the 27-year-old Whitesburg native has no intentions of letting the fight get to that point. The way she’s looking at it, an ideal night would feature a Larry Holmes jab and a Tommy Hearns right hand.

“Getting to fight someone who’s 5-5, this is so much easier,” she said. “That’s not to say I’m taking her lightly, or that opponents that are short don’t have their own advantages, because they do. But I feel so comfortable with my striking now, and I’m really coming into my own and getting a better grasp on how to use my reach. I set a UFC record on the tallest opponent I’ve ever fought with significant strikes landed, and now with more time and a much shorter opponent, I’m feeling really good about this one.”

Of course, as we’ve seen in the past, just being tall doesn’t mean anything if you fight short. Former UFC middleweight Kendall Grove was 6-foot-6, but he was notorious for getting into brawls and fighting like he was 5-foot-9. Tarverdyan is making sure that won’t be the case with Duke, and not just with gym work, but with homework he gives her in the form of watching fighters from the past and present who had size advantages and knew how to use them.

“Since I came out here and started working with Edmond, I’m training with him six to seven days a week, and I get a lot of work in,” she said. “He works with world champion boxers and he really understands striking and footwork, and he’s helped me understand my body type. And it’s not just stuff that he’s shown me, but he’s directed me to other fighters, and the stuff that we’re working on is not drilling a million different combinations; it’s focusing on some of the details that I’ve been missing and doing that over and over and over.

“I notice now when I’m sparring that being a tall fighter is a mentality,” Duke continues. “You can fight tall or you can fight short. And if you fight tall, then you’re really doing it right. I used to get right in the pocket and start throwing and just trade shot for shot with fighters that had no business even touching me. So he’s really helped bring that out of me and getting me comfortable. My jab is my biggest weapon now, and I have to be conditioned to throw it a thousand times a round if I need to.”

When Duke talks about her development as a fighter and the fight game in general, her enthusiasm is evident – and it’s infectious. It’s also frightening that with just four pro fights, she’s only scratching the surface of her potential, making her ambitions not just talk, but likely realities. And the only way she was going to find out if she had what it took to compete on this level was by moving out west.

“It’s kind of like the sink or swim mentality,” she said. “You find out if this is really what you want to do or not. Your own mental barriers are the only things holding you back and it’s just making a decision that I want to do this and I know I can do this, and there’s no reason I can’t do what anybody in that gym has done, whether it’s win a world championship or knock somebody out with one shot. Whatever it is, there’s no reason I can’t do that too. The only difference between me and them is maybe they put more time into it. There’s no reason I can’t do throws like Ronda. The difference is that Ronda has put so much more time in working on her throws. But there’s nothing that says that I’m not capable of that. Am I ever going to be able to put in that much time? Probably not. But I can apply that same mentality to something like striking or something that I already have a foundation in.”

Also aiding in her fighting progression, as well as her adjustment to a new home, is the bond she shares with her roommates and training partners. Yeah, the Four Horsewomen thing is catchy, but it’s also something real to these young ladies.

“You have good days and bad days, but I have my teammates there to pick me up and support me when I need it,” said Duke. “Me, Shayna, Ronda, and Marina, we live together, we train together, and at night we all download about training and life and it’s so good to keep you focused and motivated. It reminds you of where you’re at and how much we have to be thankful for, so it makes those daunting days of training a lot easier to go into when you know you have such a great team to support you. It’s maybe one of the most important things for my career and my life and everything going on right now. That inner circle, our group of friends, our team, it really has become something.”

It’s also key for any female fighter these days. In many gyms, a top level female fighter might be the only one, making a solitary pursuit even lonelier. But with Duke and company all going through the same things at the same time, it makes a tough business a little more bearable.

“Sometimes you’re around people and right away you click, and we were all like that,” said Duke. “That’s how we ended up living together and then this Four Horsewomen thing got started and it made the bond stronger and made us feel like more of a team and that we’re a unit. And that’s the greatest thing in my opinion. We all have these different backgrounds and experiences and ages, yet we all can learn from each other. Each one of us can teach the others something. And we all respect each other, which is extremely important, and all the coaches we work with really push that to be a strong team, you have to be like a family. And it is like a family, it is like having sisters. And knowing people like that have your back, there’s nothing better.”

Well, a knockout win this Saturday might be comparable.