"I tell people if I could fight anybody, I would want to fight someone
that can give me a war because I think that is something that makes you
grow as a fighter." - Jessamyn Duke 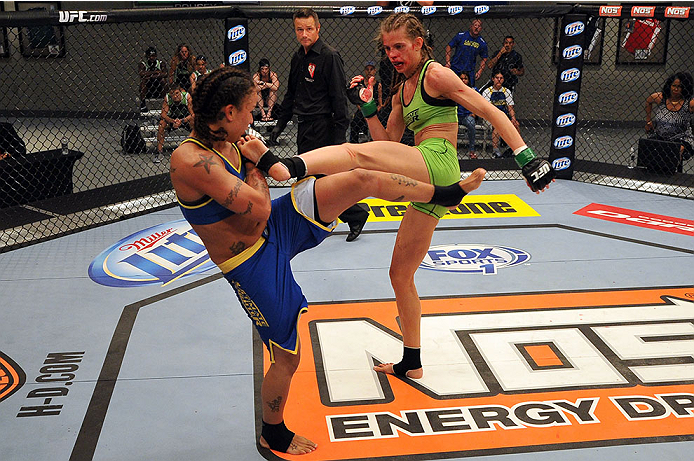 Fighters are usually in distinctly different camps when it comes to the idea of ‘The War.’ You know, the kind of fight where there’s blood, spit, sweat, and fists flying, where you have to shake off some adversity and keep fighting when every fiber of your being wants to quit.

The first camp says, ‘uh uh, I don’t want any part of one of those; I want to dominate, get in, and get out.’ The second welcomes such a taxing battle. Well, at least that’s what they say publicly, but if they had their way, they’d skip it too. The third camp is the one where TUF 18 bantamweight Jessamyn Duke sits. In that end of the MMA fighter spectrum, they want a fight to push them to the limit, and they mean it, even though as Duke points out, “People think you’re crazy when you say stuff like that.”

It makes perfect sense though. Anyone who puts on the gloves and walks up those four steps into the Octagon or ring has courage. No ifs, ands or buts about it. But do you have a little something extra in your chest when it gets heated, when everything’s going wrong and you’ve got an opponent intent on separating your head from your shoulders? Fighters like Duke want to find out, and she did in her TUF 18 quarterfinal bout with Raquel Pennington, an instant classic that was one of the best fights ever seen on the reality series. And while she lost a decision to Pennington, she got the answers she was looking for.

“It’s hard because it was such an awesome fight,” she said. “It was so competitive and so exciting and it got such a great reaction that you can’t help but be proud to be a part of something like that. However, it’s hard to be on the losing end of that. When it’s something that people are going to remember forever, you really don’t want to be on the loser’s end. So it’s very, very bittersweet. But then I know it was such a great fight, and it’s the best I’ve ever fought. It’s the best I’ve ever looked in a fight, and it’s by far the greatest thing I’ve done so far as a fighter. I’m definitely proud of that and it’s motivated me even more. You learn a lesson that hard, it sticks with you.”

And looking back, Duke wouldn’t change a thing (well, maybe the end result).

“I tell people if I could fight anybody, I would want to fight someone that can give me a war because I think that is something that makes you grow as a fighter,” she said. “It changes you to get in there and just put everything you’ve got on the line. You pour your heart and soul into that fight and it changes you and makes you grow as a fighter. You see it happen in other fighters’ careers after certain fights. It’s like GSP (Georges St-Pierre) when he lost to Matt Serra. That loss changed him. Not that it was a war, but there are moments that can change you as a fighter. And I think those wars are one of those moments. The reason we fight is to see what we’re made of, and it’s nice when you can go in there and see it and it’s satisfying. It’s nice to know it’s there and for everyone to see that it’s there.”

The bout with Pennington, along with the entire TUF experience, cemented Duke’s belief that this is what she was put on this Earth to do, and if she was ‘all in’ before, she’s even more so now.

“One thing about me that a lot of people don’t realize right off is that fighting and this lifestyle, that’s really it for me,” she said. “That’s my plan, that’s what I want to do, and there’s no backup plan for me, not some job that I’m trying to go back to. On the show, you’re cut off from everybody, everything is focused around fighting, and I loved it. For the first time in my life, I could have everything that way. The weight cut, the diet, the training, the discipline - it’s rewarding to be disciplined and see results. I enjoy it, and being on the show really showed me what I want to do with my life. I want to fight and have a great career and then do something related to fighting.”

A native of Whitesburg, Kentucky, the 27-year-old Duke has been training since she was 19, taking an amateur fight four years into her time in the sport and then turning pro in 2012. At that time, the idea of women fighting in the UFC was a far-fetched dream, and even making a living as a full-time fighter wasn’t a realistic notion.

“I definitely couldn’t afford to just live with that; it just wasn’t realistic,” she said. “You’ve got to pay the bills somehow, and while I was doing okay, I was not doing well enough to completely blow off everything. So it was my goal to put as much as I could possibly put into fighting to get the best results and to get to a point where I could live that way. That was the plan.”

Soon that plan changed. In 2013, a women’s division was brought into the UFC, and then The Ultimate Fighter would welcome the fairer sex in for the first time on season 18.

“I was completely ecstatic about that,” said Duke when asked her reaction to the UFC introducing a women’s bantamweight division. “It was such a crazy thing because from the time I started fighting, that was never an option. It was never even a thought that the goal would be the UFC. It was like ‘that’s never gonna happen,’ so you’ll just be happy with Strikeforce, and then Invicta came along. That’s what you have to shoot for. So when they announced that they were opening up a women’s division, it was the craziest thing ever. It was a dream come true. I couldn’t have even imagined that this was a possibility, and now it’s real.”

Reality (pardon the pun) hit home even further when Duke tried out for TUF 18 and made the final cast after her submission win over Laura Howarth. And while she lost her quarterfinal bout to Pennington, her performance warranted a return call to the UFC for Saturday’s finale card in Las Vegas, where she will face castmate Peggy Morgan.

To get ready for her Octagon debut, Duke showed just how committed she is by relocating from Kentucky to Glendale, California, where she has been training with her TUF coaches Ronda Rousey and Edmond Tarverdyan. And she promises that the fighter you see this weekend bears little resemblance to the one you saw on the show.

“I’m a totally different fighter than I was,” said Duke. “From the time I stepped on the show to the time I was done, I became a completely different fighter. And since the show, I’ve been doing the same things, and now instead of just six weeks of change, there are months of this change. I know how I’m doing in the gym, everyone around me is telling me that I look like a different fighter, and that’s extremely satisfying. I can’t wait to show everyone.”