Jerrod Sanders: It's Now or Never

“Once I’m on the ground I’m overwhelming. I’m bigger. I’m heavier. I’m going in there like a bully. I’m taking the Gray Maynard mindset.” - Jerrod Sanders 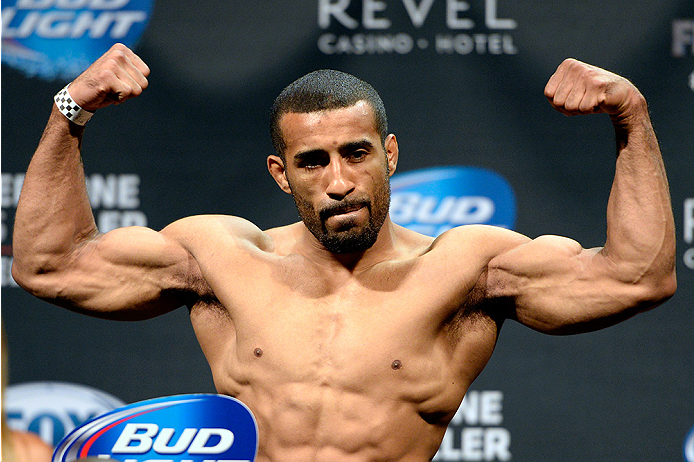 Jerrod Sanders is hoping the second time will be the charm as he makes appearance number two inside the Octagon against Brazilian jiu-jitsu specialist Pedro Munhoz in Halifax, Nova Scotia, Canada this weekend at UFC Fight Night: MacDonald versus Saffiedine.

Sanders’ UFC debut against Yosdenis Cedeno in July ended by way of doctor’s stoppage after he damaged his knee in the first round.

“It was more ankle than knee but I was too heavy on it and couldn’t put any pressure on it all after that,” he said. “It was the first kick of the fight that ended my fight. It is something to learn from. My mistake was hanging out waiting, but maybe that was first-time jitters. I felt good going into it, but maybe once the lights went on, who knows.”

That fight was at 155 pounds, but this time out he’s dropping all the way down to bantamweight.

“I usually fight at 145 pounds, and I’ve been wrestling my whole life, so I know I can cut weight easily. The plan is to make weight and put some back on quickly so I can be bigger in the ring come fight night. But we’ll see. I’m thinking I have a better shot at going all the way at 135 than I had at 145. I want to make a statement and go for it all. It’s now or never. But who knows, last time I weighed 135 pounds I was a senior in high school,” the 34-year-old said.

Sanders not only wrestled his whole life, he was a standout at Oklahoma State, where he was an All-American on the Cowboys’ 2003 NCAA championship team and finished his career with a 78-22 record.

“I have had a lot of success against high level jiu-jitsu guys,” he said. “Just having the control from all my years of wrestling, it stops those wilder submission movements. I know Munhoz is good on the ground, but I know my way around a mat, and you know, you can be a black belt all day with a gi on. But when you’re on your back getting punches and elbows thrown at you, it’s not so easy to grab a submission.”

As part of American Top Team OKC, in Oklahoma City, Sanders has plenty of opportunity to defend against submissions under the watchful eye of decorated BJJ artist Giulliano Massaras Gallupi, also his head coach.

Unfortunately for Jerrod, Gallupi won’t be in his corner for this fight due to a miscommunication in paperwork.

“Yeah, I’m going to be one short in my corner because as a Brazilian he needed a Visa, not just a passport to get into Canada, but that’s okay, I will use it as motivation,” he said. “I want to win even more now knowing I won’t be able to hear his voice yelling instruction.”

“I have a seven-year-old daughter and she watches my fights on TV,” he said. “The last fight she texted me after I got hurt, ‘Don’t worry Daddy. Better luck next time.’”

And while cutting to bantamweight may be part of his master plan, he’s entering a division that just a lot stronger since the former champion Dominick Cruz made his return after a three-year layoff due to injuries.

But taking a page out of the Conor McGregor post-fight interview book, Sanders thinks that his size may make a difference against the smaller opponents, and that it will be “a whole different world” when they get hit by “J-Reazie.”

“That’s the plan anyway,” he said. “To be a whole lot stronger on the feet, impose my will and make the guy want to take it to the ground. Once I’m on the ground I’m overwhelming. I’m bigger. I’m heavier. I’m going in there like a bully. I’m taking the Gray Maynard mindset.”