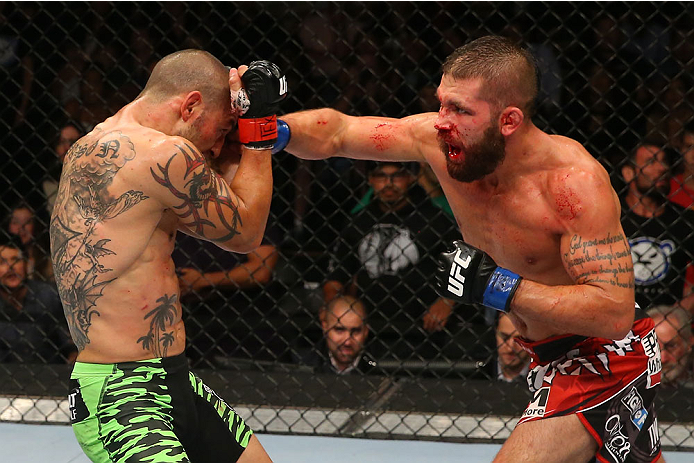 Thirty-three fights into a professional career that has seen its share of ups and downs, Jeremy “Lil’ Heathen” Stephens, at age 28, talks more like someone at least ten years his senior when it comes to breaking down mixed martial arts and his next opponent, Brazilian Jiu-Jitsu ace Charles Oliveira.

The two featherweights will meet in the Octagon at the TUF Finale Friday in Las Vegas, live on FOX Sports 1.

“I’ve been in this game a while,” Stephens said. “I’ve seen everything, but that doesn’t take away anything from the kid. He’s got really good jiu-jitsu skills, and he’s pretty solid on his feet. We’re both exciting fighters and I’m sure we’ll have a great fight and give a good performance for the fans.”

Oliveira has responded to a two-fight skid coming at the hands of Cub Swanson and Frankie Edgar with back-to-back submission victories, and he is riding a lot of momentum coming into this fight against Stephens, but the Iowa native says both Swanson and Edgar have provided blueprints for victory.

“Frankie and I have good wrestling and good strikes, but Frankie has more volume with strikes,” he said. “With me, if I hit you I will put your lights out with fewer strikes, like Cub did to him. But I do look at what Frankie did as kind of a blueprint; however, I’m looking to bust him up for three rounds. I’m looking to make it a long night for him. With every fight I get better and better. “

Stephens dropped a unanimous decision to Swanson in his last fight in June - snapping a three fight win streak - but however cliché it sounds, fighters learn more from their losses than they do from their wins, and with Stephens it was no different.

“My last fight I had a lot of adversity,” he said. “I thought I broke my hand in the first round, but I still went out there and gave it my best. It inspired me, and I learned a lot about myself because I had to dig deeper for a five-round fight. After that fight I started waking up earlier, getting to the gym earlier, and it really motivated me to get in there and put the work in. I feel like, along with my team Alliance out here in San Diego, I’m getting better and better all the time now. It’s funny, I’m older and have been around a long time, but I’m more motivated now than ever before.”

Stephens commands a certain respect from his peers. He has never turned down a fight, and he is classy in wins and in losses. There’s one particular loss he looks back on fondly, particularly since the fighter in question was a good friend who recently retired.

“Yves Edwards quit me, and if anyone is ever going to do that to me, I’m honored it was Yves,” he said. “I just wished him a happy retirement on Twitter. Before we ever fought, he came out to San Diego to train for a fight and we became real close. He and Josh Thomson were the originals in the 155-pound division, and unfortunately they did away with the division when Yves was on top, but I can’t be more happy that I was able to get in the Octagon with him. He’s a tremendous athlete and a hell of a great guy. Even my split decision against Sam Stout was a great time. I ran into him about three weeks after we fought each other, and we hung out at a pool party in Vegas and we had such a great time. I love getting to know guys that I have wars with. Sam and I are boys now, and every time I see him I give him a big hug. He’s a warrior and I respect guys like him.”

Like most fighters that have seen the sport evolve over the years, a “train smart” theme seems to always creep to the top of the training camp conversation. For Stephens, it’s more a matter of proper maintenance than slowing down in the gym.

“You have to get your work in, and if you spar reckless that’s just not smart,” he said. “But I use a lot of technique when I spar now. I don’t just go in and brawl like I used to. Knowledge is power and it is also money, and if you’re smart enough you will understand that the sport is evolving. The smartest people are the ones who know how to adapt. Look at the Stephan Bonnar versus Tito Ortiz fight a few weeks ago. It was like watching them fight eight years ago. There was no head movement, no footwork. Guys like me, or Chad Mendes, we fight southpaw, we fight orthodox, we change our footwork and transition well. We are ambidextrous out there and that’s how this sport has evolved.

“People have also become a lot more aware of their bodies,” Stephens continues. “For instance, people are doing rehab even without injuries, because it gives the body a chance to heal better. I’ve used stretching therapists, and I understand how to recover, how to drop weight safely. There are so many things I’ve learned throughout this career. Of course there are those moments when you have to dig deep sometimes, but as long as you’ve been in the deep water and come out okay, you have that knowledge and that confidence that if things get hard you’ve been there before and you’ll persevere. You can go to the best coaches in the world but if you don’t have that heart you will never succeed.”

Stephens has two daughters who visit the gym and watch Daddy train, and one of his career highlights was a win over Darren Elkins at UFC on FOX: Henderson vs Thomson in Chicago, Illinois, when they got to sit next to the cage to watch their father in action.

“One of my daughters just went into kindergarten and she asked for some posters to bring in for show and tell, and she told her class that Daddy is a fighter,” he said. “I was like, ‘how do you explain that to a kindergartener,’ but it’s still so cool that she’s proud of Daddy. My kids are my motivational factor. I want more. I’ve committed a lot of years to this sport but I’m still hungry and that’s why I do it.”

Family has always been important to Stephens. A product of a broken home himself, he strives to make sure his children don’t go through some of the same struggles he went through as a child, but he credits his grandfather for his chosen profession.

“My grandfather believed in me even before I believed in myself,” Lil’ Heathen said. “He told me that I can beat anybody in the world. When I was seventeen years old he told me I would be in the UFC. He saw something in me before even I could see it. It was his words that inspired me to continue this sport and to believe in myself. If he were still here I would thank him for putting me in wrestling when I was five years old. I would probably break down in tears and just tell him thanks for believing in me.”