Jeremy Stephens: A Sort of Homecoming

"There’s been a lot of development over the last two years in the gym, but the best is still yet to come." - Jeremy Stephens 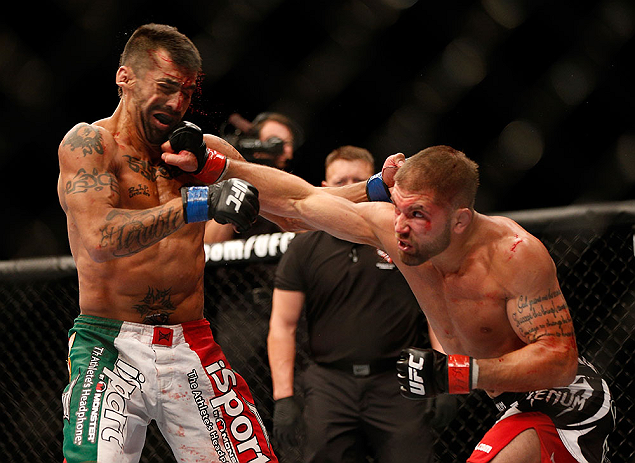 As a resident of San Diego, it may be all sun and sand these days for UFC featherweight Jeremy Stephens, but don’t think for a second that the “Lil’ Heathen” has forgotten his Iowa roots. So when he meets Indiana’s Darren Elkins this Saturday in Chicago, he’s gearing up for a good ol’ fashioned Midwest showdown.

“It’s awesome,” he said. “Anytime I ever fought in my hometown, I always felt their energy and they’ve always been big supporters of me and I love that type of energy and support. It always made me perform really well and I like the added pressure of being close to my hometown. It’s kind of cool because I’m from Iowa and my opponent’s from Indiana, so we’re meeting right in the middle in Illinois.”

You know what they say, you can take the boy out of Iowa, but you can’t take Iowa out of the boy, and though he’s gone west to work with the renowned Alliance MMA team, Stephens remains the epitome of the Midwest fighter, and in his eyes that means just one thing:

“I would just say heart,” he said. “You throw a dart in the middle of the United States and where does it land? It lands on Des Moines, Iowa, and that’s where the heart of the whole U.S. is. We’re very hard working people, very dedicated, and very persistent. We’re grinders, we know how to dig deep, and we know how to enjoy life as well.”

It’s safe to assume that the 27-year-old is enjoying life after a rough 2012 that included two losses to Donald Cerrone and Yves Edwards and a fight day arrest for a 2011 assault charge that was later dismissed. In between being cleared in July of last year, Stephens dropped to the featherweight division and defeated Estevan Payan and Rony Jason. It was a fresh start in more ways than one, and he’s embracing it fully.

“I’m rejuvenated,” he said. “A lot of people saw a lot of diversity in so many different ways that they’ve probably never seen before from me, so I’d say a very adaptable person is arriving and constantly mixing things up and working hard.”

And at featherweight, he’s not only carrying his one punch knockout power, but he feels as if he’s physically able to do things that he never was at 155 pounds.

“I’d say my athleticism is on a whole other level right now,” he said. “I’m working with a great strength and conditioning coach in Naudi Aguilar at Functional Patterns. He’s really helped me bring out my athleticism and help me learn about the human anatomy and use my body and move in ways that I could never move before. Along with coach Eric DelFierro and his master game plans, they’ve got me real light on my feet and using my legs, and knowing how to move and adapt and make a lot of changes. So there’s been a lot of development over the last two years in the gym, but the best is still yet to come.”

That’s obvious just by talking to him and hearing a maturing young man who is a far cry from the shy kid who came blasting out of the gates in the UFC as a 21-year-old in 2007. Back then, if you got a sentence or two out of Stephens, it was a lot. These days, he’s whipping Charles Darwin quotes out of the air and showing that he’s not just evolving as a fighter, but as a person. He still can laugh about the old days though, and his desire to simply let his fists do the talking.

“It’s still a fight, man, and I know how to fight (Laughs), so I just went and did my thing,” he said. “I’m a fighter at heart, that’s what I do. But as a person, if you don’t learn how to live and grow and adapt, you pretty much fall off. I was able to grow along with the sport and the UFC, and it’s been a fun ride, and good things are gonna happen in the future.”

That future starts with this Saturday’s bout against Elkins, one in which he promises to show that the featherweight version of himself that you’ve seen already hasn’t even scratched the surface of his potential yet.

“Everything I’ve learned at 155 pounds is being brought down to 145 pounds, and to me, it’s a fresh start,” said Stephens. “I look at it like I’m 2-0, and I can’t even look back at my past success. I’ve had good knockouts and some good wins, but I’m looking forward to this January 25th fight, where I feel like the best me is still yet to come and I can’t wait to go out there and have another dominant performance and make a statement and let everybody know that I’m here.”

Or more importantly to his family, friends, and fans in the Midwest, that he’s back.