"At this point in my career and at this stage of my life, I really feel
like I’ve put it all together and become a well-rounded vet and a better
human being." - Jeremy Stephens 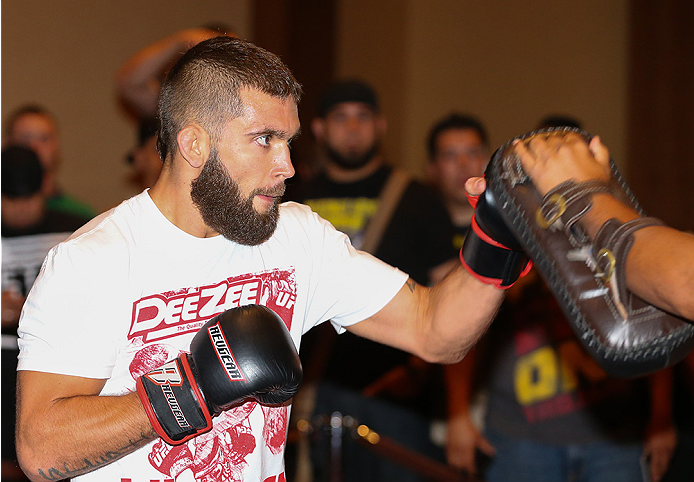 The last time Jeremy Stephens saw his name on the marquee as one half of a UFC main event, he wasn’t the same guy he is now, in or out of the Octagon. Back in February of 2009, he was that wild-swinging wild child from Iowa, the kid who just a couple months earlier threw a series of hellacious uppercuts in Rafael Dos Anjos’ direction, just daring the Brazilian to stop them.

He didn’t, and Stephens picked up his third UFC win and his first Knockout of the Night bonus. Few figured that he would end up as a serious title contender at 155 pounds, but man, was he fun to watch. And he was a fighter down to his core, so when his training partner Hermes Franca got injured, Stephens stepped up on 12 days’ notice to face fellow prospect Joe Lauzon with no hesitation.

Looking back, maybe he should have hesitated, as Lauzon submitted him in the second round. The defeat kicked off a ten-fight stretch in which the Des Moines native went 4-6 in the Octagon, and many wondered what his future in the promotion was going to be.

Well, it apparently was going to be a bright one, as three fights after his knockout loss to Yves Edwards in 2012, Stephens is a top contender in a new division – featherweight – and he’s back in the headliner’s spot this Saturday in San Antonio as he prepares to meet Cub Swanson.

So how are things different from 2009?

“I’m actually a good purple belt (in jiu-jitsu) now,” he said with a laugh. “I have a ground game, I have wrestling, I have great coaches around me, I’ve got a great team and I feel like I’m putting things all together from those past experiences. I’ve learned a lot, it’s been a rollercoaster in the UFC, I’ve been put in every single position and there’s not too much that I haven’t seen inside that Octagon. At that time, I wasn’t as confident in my ground game, not as confident in my wrestling, and through the years, they’ve become some of my strong points now and it’s something I’ve developed. At this point in my career and at this stage of my life, I really feel like I’ve put it all together and become a well-rounded vet and a better human being.”

Now fully entrenched with his family in San Diego, where he trains with the Alliance MMA team, the 28-year-old is a lot more comfortable in the Octagon and in the spotlight that surrounds it. That wasn’t always the case, but with age and experience comes wisdom, and it’s served “Lil’ Heathen” well since he moved to 145 pounds and defeated Estevan Payan, Rony Jason, and Darren Elkins in succession.

It’s even reflected in his fight game, which is still exciting, but not as reckless as it used to be.

“I’m a fighter who just goes for the finish,” he said. “I don’t ever go for the knockout because if you’re looking for it, then it’s never gonna come. You’ll be chasing the perfect punch. Now I’m more relaxed when I fight and I let things just flow. I take the risk and I hope to get the reward.”

As an example to follow, Stephens points to fellow Iowan Robbie Lawler, whose success and smiling face in the Octagon these days has inspired countless veterans to look at why they do this and more importantly, how they do it.

“I look at Robbie Lawler and I think that’s the point I’m at in my career,” said Stephens. “I fell in love with training again and it’s not a thing where I have to do it; I’m really enjoying training and getting better, and I’m just having fun. And when that happens, that’s when I’m most dangerous and when I’m most exciting.”

Dangerous? Exciting? You could be describing Cub Swanson as well as Stephens, but while fans are expecting a Fight of the Year candidate in Texas, Stephens isn’t making any bold statements. All he’ll promise is that he’s going to have a good time, and when he has a good time, the people watching usually get one too.

“I’m not gonna put any pressure on myself,” he said. “I don’t need to do any of that or say that I’m gonna do this or do that. I’m just gonna go in there and have fun, and when I’m having fun, that’s when the fireworks happen for me. I know he (Swanson) brings a lot of variables to the table, and I’m going to have the solution for all the problems that he brings.”

If he does, we may just be looking at the next challenger for the featherweight title. Now who would have guessed that would be the case in 2009?