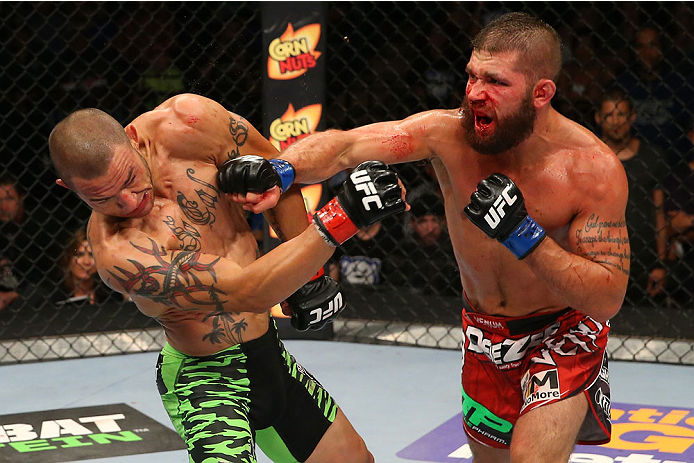 You almost have to wonder if there was some funny business going on when Jeremy Stephens filled out the application for his first fight license. There’s no way that after seemingly being around forever in the UFC that the “Lil’ Heathen” still hasn’t celebrated his 30th birthday.

He must have started fighting when he was 12.

All joking aside, there are few fighters in the lightweight division who can boast the level of Octagon experience of the Iowan, who fights for the 21st time in the UFC on Saturday against Dennis Bermudez. Over the course of his time in the promotion, Stephens has fought the best night in and night out, and he earned the respect of his peers with his fists and his chin.

And though it’s evident that it’s not an easy gig to stay on the roster non-stop since 2007, what can be even harder is keeping the sport fresh for that long. Stephens has found a way though.

“Just like the sport and just like the UFC over the years, they’ve grown and evolved and adapted and always made changes to better themselves, and that’s what I’ve done as a fighter, a father, a person, and that’s how I view life,” he said. “I feel like if you’re not growing evolving and making the changes properly to get better, then you’re just going to stay the same. In this sport, I’m constantly learning new things. There are always some younger guys coming in and I just like evolving and getting better and learning more and more about martial arts. That’s what’s fun for me, and the moment that starts dying out and I stop having fun and learning and growing and wanting to be in the gym, that’s probably the day I’ll hang ‘em up.”

The biggest factor in keeping that excitement level high was likely Stephens’ full-time move to San Diego and the Alliance MMA team a few years back. Surrounded by world-class coaches and top-notch training partners, Stephens was able to grow as a fighter while also providing his family a southern California lifestyle far removed from the harsh winters of Iowa.

That’s the good news. The bad news is that after putting three consecutive wins together in 2013-14, he’s dropped his last two against Cub Swanson and Charles Oliveira. There’s no shame in losing to that duo, but the question mark was in Stephens’ attitude. Once a reckless brawler who was willing to walk through fire to get his hands on an opponent, Stephens appeared to tone things down in terms of mindset, and as he approaches a pivotal bout with Bermudez, he doesn’t deny it.

“The biggest thing that I feel I’ve gotten back was my mindset,” he said. “It’s an old school mentality. Somewhere along the way I lost that mindset. But I’m back to hard training and hard grinding. I’m in a great frame of mind, and I feel like everybody is mentioning that around me. Things are starting to change for me, and it all has to do with my mindset and my attitude and how I’m approaching things, and honestly, it feels really good. I feel super confident and, mentally, I’m prepared. This is war. This guy is trying to take everything from me and my kid, so this is a war mentality. I’m going in there to crush him.”

Sounds like some old school “Lil’ Heathen” right there, making it the perfect time to ask for his thoughts on “The Menace.”

“I just see a typical meathead, wrestling grinder, who tries to put on a cardio pace,” Stephens said of his foe. “His best defense is a good offense, but I think he’s got a lot of holes in his game and I don’t feel like he’s fought anybody as strong as me and as powerful as me. He hasn’t fought someone who’s going to be able to match that pace and someone who can hit harder and put his lights out at any given moment. I think he’s in for a rude awakening if he thinks he’s going to walk right through me or if he’s going to win. I’m gonna take everything from that guy come July 11th.”

The two losses have apparently fired Mr. Stephens up, and what that means for Bermudez is a possibly rough night, and for fans a fight to remember. As for the Iowa native - 34 fights into his pro career but still just seven months older than his opponent - this is a chance to remind people just who he is.

“I’ve been around this sport for a long time, I fought some of the top fighters and world champions, and there’s nothing I haven’t seen,” he said. “So I’ve just got to go out there with a good, clear head on my shoulders, stick to my game plan, go out there and execute, and just demolish this guy.”