"Since the show it seems like my game has really evolved to a totally different level." - Jeremy Larsen 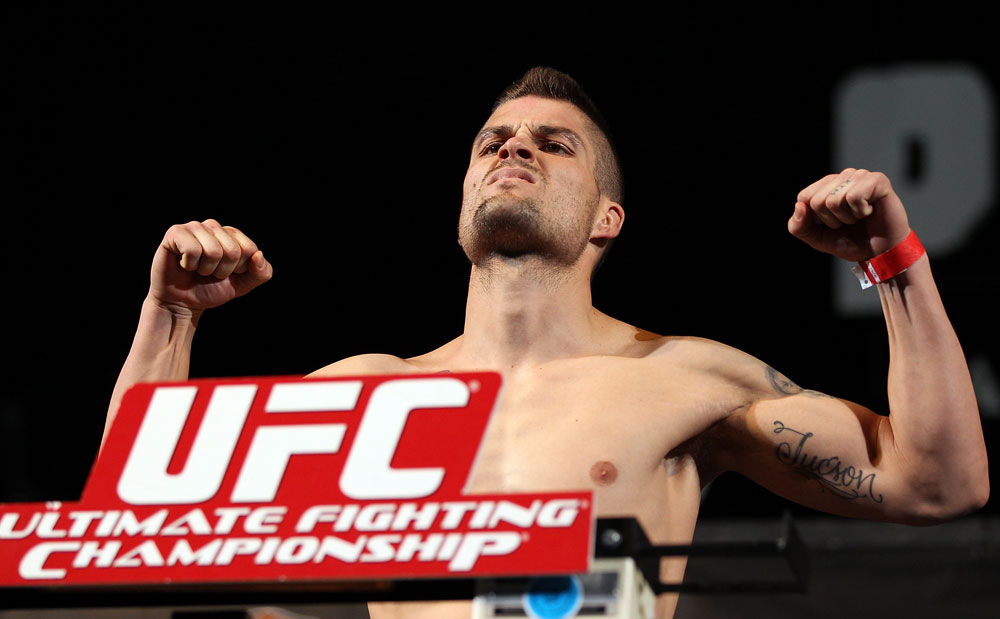 The days are longer for Jeremy Larsen than for most prizefighters. First there’s a full day driving a truck, then a full schedule of training, followed by maybe 45 minutes with his wife and son before he rests up for a few hours and does it again.

It’s not the glamorous life some associate with the fight game, but Larsen never got into the sport for fame or glory. It’s all about giving his family something he never had.

I would love to be a full-time fighter, that’s my dream, but it’s not that difficult for me only because

“I grew up really, really poor,” said the 29-year-old from Arizona. “I learned a hard work ethic from watching my mother bust her butt and the little bit that my dad would pop in and out, he was a pretty hard worker. So I refuse to have my family have to endure the struggles that I did growing up being so poor and getting made fun of because of the clothes and shoes I had. So I made the choice to keep the full-time job for now, keep the UFC money in the bank, and hopefully when it’s all said and done we can take nice family vacations and I can make our lives a little bit easier in the future. It’s hard times out there still for people and I’m trying to make my life and my family’s life a little bit easier.”

So he works, he trains, and he fights. Sure it’s a sacrifice, but nothing worth getting comes without it, even if he sees the sacrifice being made by his family, not him.

“My wife and son sure make sacrifices because they don’t get to see me as much as they’d like during the week,” he said. “Monday through Friday I probably see them 45 minutes a day, but weekends are specifically for them.”

One weekend won’t be, as on May 18, he’ll be working in Brazil. He won’t be behind the wheel, but with gloves on, as he takes on Lucas Martins on UFC on FX 8. It will be Larsen’s first bout since his TUF 15 finale loss to Joe Proctor, a disappointing end to his stint on the reality series’ first (and only) live season. For each of the fighters on the show, it was a 13 week test of not just of their physical abilities but their mental ones as well.

“The only way I can describe it is that it was the best and worst situation I’ve ever been in in my life,” he laughs. “On one hand, I’m training full-time, training with Dominick Cruz, and he had Phil Davis and Shannon Slack and all these good wrestlers in there, working on things I need to work on. But on the other end, I’m away from my support system: my wife, my son, and all the people that help drive me and give me that hunger to go out there and do well. They weren’t there, and that show really beats you down mentally, but then coming off the show, you realize what you can take mentally. You realize that you can push yourself to a whole other level, and dealing with other fighters from your team, you have open and honest conversations with them about your fears and everything. And it was amazing to hear that they have the same fears as you. It’s not necessarily losing that we’re scared about, but letting our families and our teams down.”

Following the loss to Proctor, Larsen dealt with a hand injury, as well as the loss of a previous job, so as he got healthy and got a new gig, his fighting career had to take a back seat.

“It was a whole combination of things,” said Larsen of his nearly 11 month layoff. “I have a family, I have a house payment, I have responsibilities to people and I have to pay the bills. So at the time I had lost one job and had just got hired at this new place and they couldn’t give me the time off. Plus I was coming off a hand injury and it felt like there were too many obstacles to try and overcome to get it done.”

But as 2013 dawned, things started to fall into place for the Arizona Combat Sports team fighter, and soon he got a fight. Now it’s off to show fans just how he’s improved over the last year.

“Once I was secure at my current job and they were willing to work with me with time off, and once the hand started feeling better, I was ready to go,” he said. “At the finale I got caught, and hey, that happens, but since the show it seems like my game has really evolved to a totally different level. Even my training partners like Jamie Varner and Estevan Payan have all said you’re a different animal since coming back from that show.”

As he gets ready to leave for Brazil, he’s on the verge of becoming the latest fighter from his home state to make his mark in the Octagon, a list that’s getting longer and longer with each event, considering that UFC fighters like Varner, Payan, Benson Henderson, Ryan Bader, CB Dollaway, Chris Cariaso, John Moraga, Kelvin Gastelum, Jon Tuck, Seth Baczynski, and Yaotzin Meza all call Arizona home. What’s the secret?

“For one, we’ve got great weather, so it’s never like it’s cold outside and you don’t want to go out and train,” said Larsen. “And two, there’s just not a lot to do in Arizona. (Laughs) It’s not like you just go to the beach and relax and hang out. It’s the desert, everything’s dead out here, and it’s pretty much just hit the gym or party, and the party scene’s not really for me, so fighting is my rush. It’s what I like to do and apparently what a lot of other guys are starting to like to do too.”

And finally, he’ll get to do it again on May 18, joining his TUF 15 castmates in the Octagon.

“It (the wait) has been difficult, but I’ve been trying to take it in stride,” he said. “Good things come to good people who wait, so I just waited my turn, worked as hard as I could work in the gym, and when I got the call for this fight, I was already in shape, so I’ve been going hard for about 15 weeks. A lot of those guys (from TUF 15) have been making their names and I’m just ready to get in there and say those guys are not the only ones. Remember me.”