The Future Is Here For Jeff Molina

Flyweight Prospect Looks To Keep The Momentum From His Bonus-Worthy UFC Debut
By Thomas Gerbasi, on Twitter: @TGerbasi • Oct. 22, 2021

The victory tour was a little longer than Jeff Molina expected, but it was well worth it, as he went back to his home state of New Jersey to visit family, hit the Big Apple and even got recognized by a fan for his work on Dana White’s Contender Series.

That time off also gave him the ability to heal up some nagging injuries he picked up before his UFC debut win over Aoriqileng in April, and most importantly, as he waited to get a fight this weekend against Daniel da Silva, he kept close to the flyweight limit.

“I was kinda known around the gym to get pretty chunky between fight camps,” Molina laughs. “They'd actually call me 'El Hefty' instead of 'El Hefe.' Not this time around, though. When I'm in camp I'm super strict on my diet. I follow it to a T. I work with Tyler Minton and I don't cheat at all. I don't have a single cheat meal for 10-12 weeks, however long the camp is. Outside of fight camp, I do enjoy a good burger, some ice cream. But I'm doing a better job of eating clean year-round and occasionally enjoying something outside of fight camp.”

That’s impressive, especially considering that a trip home to the Garden State leaves Molina perilously close to the Colombian restaurants in the city of Elizabeth, but this time around, the 24-year-old focused on matters other than food.

“The deja vu was real. I got to see the childhood home I grew up in and saw family I hadn't seen in a while, and they love it,” he said when asked his family’s reaction to his success as a mixed martial artist. “They're all super supportive, and it was cool that I got to take my pops out to Jersey, and my mom too. But the family’s not surprised. I have four aunts and uncles out there, and they're all like, ‘Man, we knew you were gonna do something like this. We knew this sport was the direction you were heading in, and it's really cool to see your success.’ That means a lot coming from people I love and care about.”

Family is a big deal to Molina, something made abundantly clear when his father Medardo was diagnosed with liver cancer before the flyweight prospect’s UFC debut. Devastated by the news, Molina fought on, and so did his dad, who is doing well and ready to go watch a fight in Las Vegas this weekend.

“He's definitely better,” said Molina. “He really wanted to be at my debut and that was at the peak of his diagnosis, but when I signed the contract for this fight, he told me that he really wants to be there at this fight in Vegas. He said, ‘I want to watch you compete under the UFC lights.’”

Yet with the fight at the UFC APEX, that might have been an issue. Enter Molina’s manager, Jason House, who was able to secure a ticket for Medardo to watch his son compete. 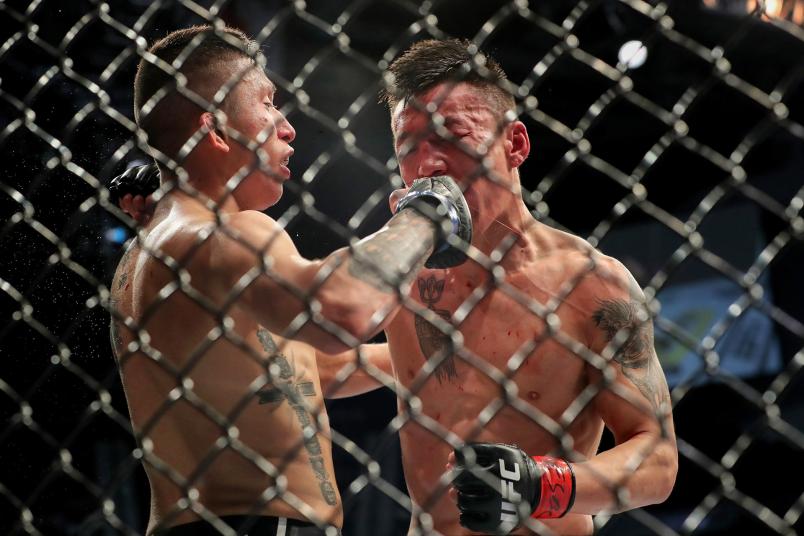 Aoriqileng of China (R) gets caught with a punch from Jeffrey Molina of the United States during UFC 261 at VyStar Veterans Memorial Arena on April 24, 2021 in Jacksonville, Florida. (Photo by Alex Menendez/Getty Images)

“My pops is gonna be a celebrity for the night,” smiles Molina, who has been doing a lot of that since his Fight of the Night win on a UFC 261 card that included superstars such as Kamaru Usman, Jorge Masvidal, Rose Namajunas, Zhang Weili, Valentina Shevchenko, Jessica Andrade, Uriah Hall, Chris Weidman and Anthony Smith.

“The people you just listed, to be in the same conversation with them is pretty cool,” said Molina. “I saw Shevchenko the morning after the event and she congratulated me on the bonus. Even Masvidal. At weigh-ins leading up to the fight, I'm telling myself, 'All right Jeff, act like you've been here. Don't fanboy over anybody.’ (Laughs) And then I see Masvidal pull up in a Bugatti with a reggaetón star, and I'm like, all right, I gotta ask for a picture. And he was super cool. He asked me my name and I told him I'm having my debut tomorrow night, it's an honor to share the card with you. And he said, ‘First off, how old are you - you look like you're 16.’ I told him and he said, ‘That's awesome, steal the show.’ And I think we somewhat did that.”

In the often-jaded world of pro sports, it’s nice to see someone get excited about their job and the sport they ply their trade in. For Molina, that’s a given, and something he’s never given much thought about because the way he sees it, if he didn’t love fighting, why would he do it?

“I compete in the sport because I'm a fan of it,” he said. “I wouldn't have started doing this sport if I wasn't a total fan of what I do. I love the sport so, for me, it's just being myself. I see these people I legit grew up watching and now I'm considered a colleague or a co-worker of these guys and it's pretty cool and pretty surreal. I'm not sure if that will ever wear off, but man, if I see someone like Frankie Edgar or Masvidal, these people that have been in the game for so long and have been able to compete at the highest level and stay at the highest level, it's pretty cool and something I aspire to do.” 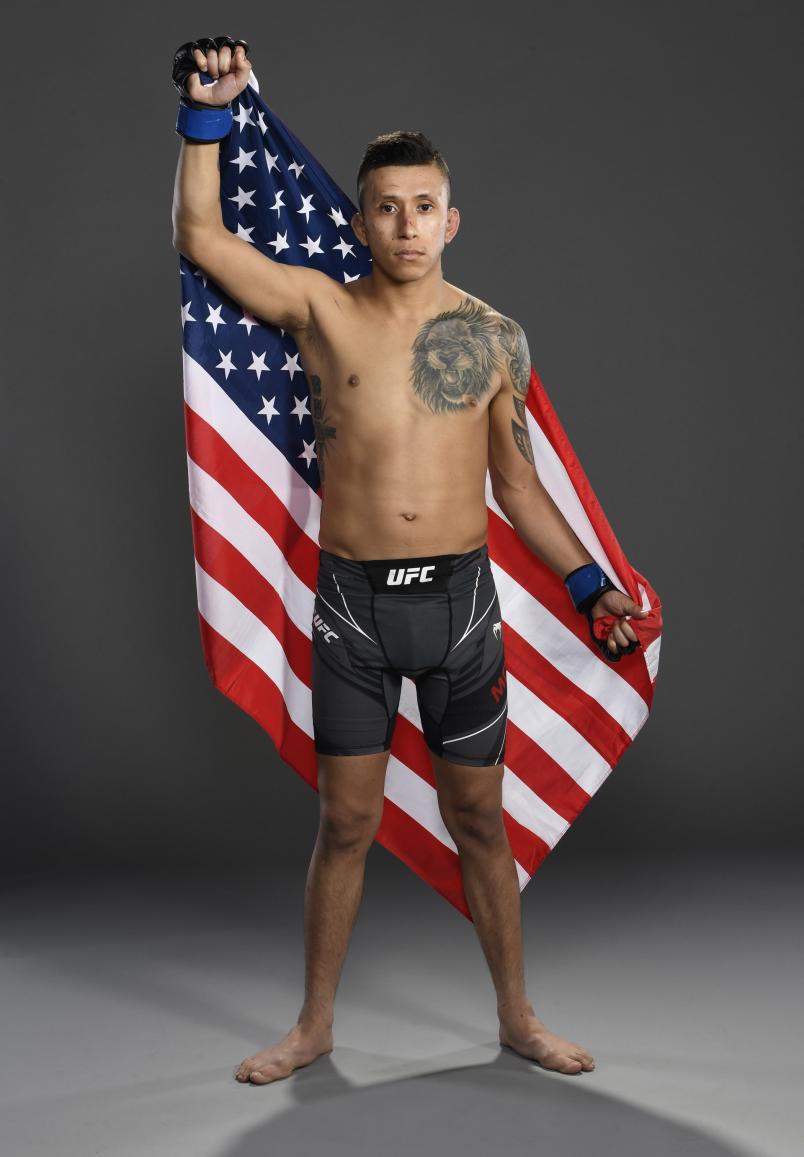 He's well on his way, even at 24 and with only 11 fights under his belt. But if you’ve been around the game long enough, you can pick out the fighters who have “it” and the ones who don’t. Molina displayed that “it” factor in his Contender Series win over Jacob Silva, and we saw even more of it against Aoriqileng, even if he doesn’t think so.

“I think I made a lot of mistakes in that fight, and I've learned from it, and I'll continue to learn from it,” he said. “I think we patched the holes up in the gym, and it wasn't my best performance. If I had to grade myself, I'd give myself a C minus.”

Whew, this kid’s a tough grader. But while most of us wouldn’t agree with that assessment of his UFC debut, it does show the streak of a perfectionist, and that’s a good thing for his future development. And for Molina, that future starts on Saturday in front of his biggest fan.