Jeff Hougland - The Power of Persistence

"Anybody that the UFC has is gonna be top notch, so if you’re not here to fight the best guys, then you’re in the wrong spot." - Jeff Hougland 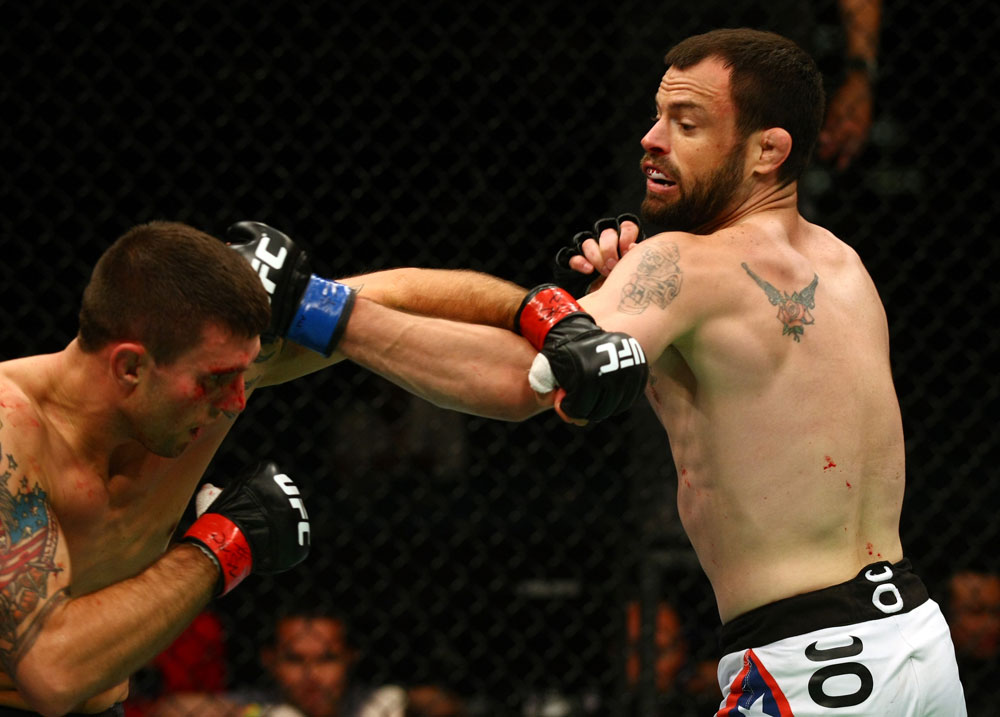 It’s a brutal truth of the fight game. If you start your career with a 1-4 record, the odds of you ever making it to the UFC are slim and none. Jeff Hougland beat those odds.

A day away from a UFC on FUEL TV main card bout against Yves Jabouin on Tuesday in Fairfax, Virginia, the 33-year old from Enumclaw, Washington is sitting in a good spot in his career. After losing that fourth bout against Glen Cordoza in July of 2003, he hasn’t felt the biter sting of defeat, but the outlook wasn’t so optimistic nearly nine years ago.

“I was like ‘man, I’m not a good fighter,’” recalled Hougland, a young man on the fast track to a dead end life before finding mixed martial arts in 1999. But he didn’t walk into the gym that first time in order to save himself from a possible life in jail, only to prepare himself for what he was likely to face behind bars.

“I really did think that I was going to prison, so I needed to learn how to fight better,” he said. “I started training really hard, but then I enjoyed the training so much that I wanted to fight and I wanted to be good at the fighting. So I had to change my lifestyle. I couldn’t hang out in the streets as much, I wasn’t with my friends and the people that were kinda putting me in these bad spots, and I eventually totally separated myself from that. I know it’s cliché, but people say ‘fighting saved my life,’ and I’d say having my wife and my daughter and fighting, if I didn’t have all three around the same time, I know I would be dead or in jail because it was bad. I was definitely heading down the wrong spot.”

The Cinderella tale should have had its ending with Hougland raising his hands in victory after a stirring run through the MMA world. That’s only in the movies. In real life, Hougland was a gutsy brawler with heart, good hands, and some takedown defense, but that was it. After winning his pro debut with a submission of Rusty Simpson in July of 2002, four consecutive defeats (including one to future Strikeforce lightweight champ Gilbert Melendez) followed. The current bantamweight lost one bout at 170 pounds and the rest at 135, but he has no sour grapes. “Those guys beat me fair and square,” said Hougland, who nonetheless had a 1-4 record and few bright options. Well, maybe one. He was still hooked on the game.

“I loved it so much, I just couldn’t quit,” said Hougland, a Modesto, California native. “I said if I quit, I’m giving in, and I just didn’t want to. And I felt like the reason I was losing was because I didn’t know any jiu-jitsu. So I jumped ship and I fixed the problem. I went to a jiu-jitsu school, I put on a raggedy old gi that they gave me, and I trained in a gi for like a year before I even thought about fighting again. And it made a huge difference.”

Then he started winning. And he hasn’t lost since.

“In hindsight, I think it was a good thing,” said Hougland. “I wish it didn’t take four losses for me to figure that out, but I was kind of a young, hard-headed guy. I figured, man, I can sprawl on these guys and I’ll hit ‘em, and…yeah. Once I got exposed, every jiu-jitsu guy wanted to fight me because they saw I had no ground game, and the losses started racking up.”

But after four wins put him over the .500 mark at 5-4, sailing still wasn’t completely smooth for the man dubbed “Hellbound.” Two knee surgeries and a series of scrapped fights kept him out of action for four years, a time when he figured enough was enough.

“I opened a gym and said I’m not gonna fight anymore,” said Hougland. “I was just gonna focus on coaching and doing all this stuff. But I was always training and I still had the hunger. I said I can still do this, I can still hang with these guys that are 10 years younger than me and faster and stronger.”

In July of 2010, Hougland returned and submitted Roy Bradshaw in 85 seconds. One win led to another and another, and after four comeback victories, he got a late notice call to face Donny Walker at UFC 132 in July of last year.

“I had only been training for maybe two weeks, and when I say training, I had been rolling in a gi,” said Hougland. “I hadn’t thrown a punch for a month. I fought a month before (in May of 2011) but I hurt my back really bad, so I took a month off to let it heal. And then I started rolling in a gi again just to get back into training, and boom, I got the call. I’m not gonna say no to a huge opportunity like that, but this sport is about being mentally tough, and you’ve got to put emotion and those feelings in their place. You can either use it for you or use it against you. And as I got older and wiser in my fight career, I’m able to deal with these things better.”

He beat Walker via unanimous decision in his Octagon debut, and while an October 2011 bout fell through due to a Hougland injury to his hand, he was cleared in December and eventually scheduled for a UFC 148 match in July against top contender Renan Barao. But then Easton fell out of tomorrow’s card in Fairfax, and the UFC needed Hougland for Jabouin. He accepted the assignment, even though the Barao fight would have skyrocketed him up the 135-pound rankings if he won.

“I was disappointed,” he admitted. “I didn’t ask for that fight (with Barao), and I didn’t even think I was on the radar to fight that guy. That was the name they threw out to me, and I’m here in the UFC to fight. I want to be one of the best in the world and those are the kinda guys I gotta beat to do that. It would have put me on the map, people would know who I was and this sport is about taking risks, and that was a risk I felt was worth taking and I think I can beat any guy at 135 on any given day. So that was disappointing, but Yves Jabouin is no joke. He’s a handful himself, he’s a real tough fighter, a great striker, and he comes from a great team, so I have a hard fight with him too. And anybody that the UFC has is gonna be top notch, so if you’re not here to fight the best guys, then you’re in the wrong spot.”

And being nationally televised on FUEL TV means that fans are certainly going to get to see him in action, perhaps for the first time, making this just the kind of fight Hougland needs to propel himself toward a dream shot at the 135-pound title.