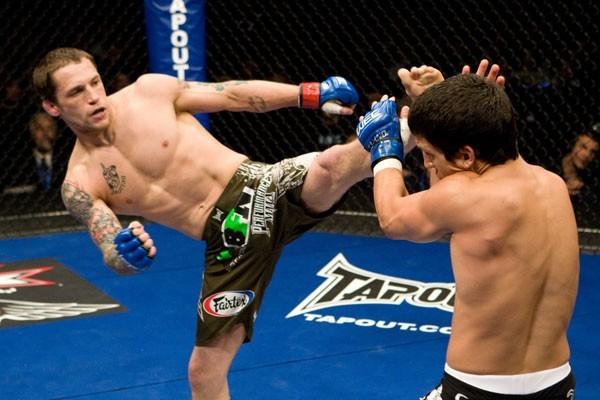 In a way, it was the day Jeff Curran had been waiting for since 2004. He was coming back to the UFC, and his first bout in the Octagon since his UFC 46 match against Matt Serra was going to be against Scott Jorgensen on October 29th. Ironically, it was the same day Bart Palaszewski, his longtime student, was scheduled to face Tyson Griffin.

So Curran has a phone call to make.

“Bart’s been with me since he was 15 years old, and I’ve been at every fight of his with him,” explained Curran. “This time, he was the first person I had to call when I got the phone call for the fight. I said ‘Bart, if you feel this is gonna take away from you or overshadow your focus or the attention you need to prepare for this fight, I won’t do it.’”

That’s selflessness. But Curran shrugs off any praise for the action, simply calling it the right thing to do.

“It’s hard to let people know without sounding like I’m tooting my own horn, but I always put my fighters first,” he said. “I’m a coach, they came to me, and trusted in me as a coach. I’m Bart’s coach, his mentor, his leader, his best friend, and I’m a lot of roles with him. Even though this is the biggest opportunity of my career, of course I’m hoping he says ‘yeah man, do it.’ (Laughs) And I know Bart well enough to know that, but I still give that respect to say ‘if this is not gonna fly with you, I won’t do it.’”

Palaszewski was all for his coach’s return to the UFC, and together, they’ve been putting in plenty of hours together, not just as fighter and coach, but fighter and fighter. It’s been a good change of pace for Island Lake, Illinois’ Curran.

“He definitely knows that together we can accomplish this,” he said. “It’s been nice. I’ve been able to do my own thing, and at the same time, Bart and I are getting a couple workouts in a week together where we’re really pushing it. There’s been a real good energy between the two of us.”

Now it’s time to bring that to Las Vegas for this Saturday’s UFC 137 event. Curran is no stranger to fighting in the fight capital of the world, having done it five times over the course of his 13-plus year career for the UFC, WEC, and WFA. “I fought for every major organization that is now owned by Zuffa,” laughs “The Big Frog,” who also competed in PRIDE and Strikeforce.

But this time it’s different. At 34, Curran has seen it all, paid his dues, and now he’s looking for nothing but big fights from here on out. So heading into a May bout with Billy Vaughan in Illinois, he made it clear that if he didn’t win and earn a spot in the UFC, retirement may have been the next option.

“The retirement question, because of that comment, has come up in every single interview I’ve done, and I guess I need a chance to explain rather than just say I would have retired,” said Curran, who contacted the UFC’s bantamweight and featherweight matchmaker, Sean Shelby, to plead his case for a shot in the Octagon.

“I told him that I’ve done my part and I’ve done everything possible to prove that I belong at the best level,” Curran recalls. “I’m gonna fight this last fight, and I’m either coming back or I’m not. He said, well, I can’t guarantee you anything. I said that’s fine, you don’t need to. I’m gonna fight, then I know I did my part, and then I’m gonna sit back and either wait for something to come, and if it went on too long, I would either just retire or reevaluate my life six months later. Ultimately, I just wanted to make a statement that I was done playing around in the mid-tiers. I don’t want to risk the legacy that my career has built or any kind of quality credentials that I’ve gained. I don’t want to risk losing to a lower-level guy. If I have a bad night and he has a great night, and something freakish happens, I can lose a lot of respect that I’ve built over the years for something with a low reward. And I wasn’t about to risk that anymore.”

Curran decisioned Vaughan over three rounds, his fourth win in five fights. The phone didn’t immediately ring, yet a month later, the veteran was already chomping at the bit.

“A month after the last fight, I called (manager) Monte (Cox),” he chuckles. “I really don’t think I would have stayed retired very long, so it’s a good thing I got the call.”

That call came in July, and Curran had his second UFC chance. He couldn’t be happier.

“It’s really nice to kinda know where my opportunity lies and not be wondering what’s next and all that kinda stuff, so everything starts to fall in place,” he said. “You start to get on a better schedule, on a better diet, and that’s how I feel. Ever since I got the call about coming back, everything seems to make sense right now.”

He doesn’t have an easy fight to welcome him back in former title challenger Jorgensen, but Curran has never been one to dodge opponents, a fact made even clearer by a WEC stint that saw him take on Urijah Faber, Mike Brown, Joseph Benavidez, and Takeya Mizugaki in successive fights. Now he gets to enter a new shark tank in the UFC’s 135-pound division, and he’s happy to be turning the switch back from fan to fighter.

“I tried not to get myself excited about something that might not happened, so I would watch the fights and see all the bantamweights and I got into it as a fan, but I kinda took myself out of the equation,” said Curran. “And once I got the call, it was automatically like every show, ‘okay, here’s how this could play out.’ So I got back to that normal ‘I want to fight the best guys in the division and I want to be a contender and be considered and respected as one of the best. So it’s definitely a fuel.”

And after Jorgensen, one intriguing matchup could be with an old foe in Kid Yamamoto, who decisioned Curran in 2003.

“The Kid Yamamoto fight was a big eye opener for me because I knew what to expect, but I never felt the same power as he had for such a little guy,” he recalled. “I thought, ‘little guy, it’s not a big deal,’ and I ended up losing that decision. I did have a good third round as always, and then I fought Matt Serra after that.”

Curran lost to Serra at UFC 46, going 19-6 since then. But the past doesn’t really matter at this point. If he gets by Jorgensen on Saturday night, the fighter who was a step away from retirement will have a brand new career. Funny game, this fight business. But Jeff Curran still loves it.