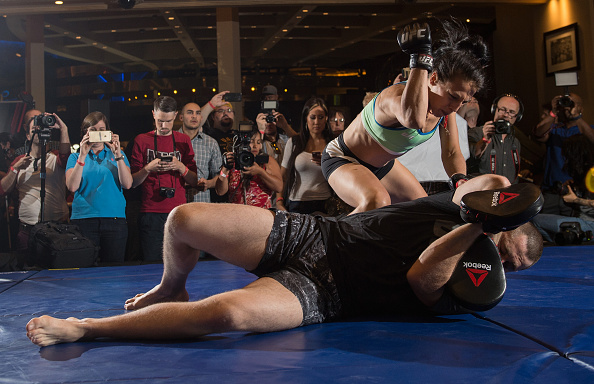 As UFC strawweight champion Joanna Jedrzejczyk settled in front of the media at MGM Grand on Tuesday to answer her share of questions about Friday’s title defense against longtime rival Claudia Gadelha, there was little of the intensity that has become the trademark of the 28-year-old, especially when the topic of the Brazilian challenger was brought up.

“I’m more calm since I arrived in Vegas,” Jedrzejczyk said with a slight smile, knowing that there will be enough time for pre-fight gamesmanship with Gadelha, against whom she just finished coaching The Ultimate Fighter for six weeks in Las Vegas.
RELATED CONTENT: Rogan preview the title fight | Rankings Report talks Fight Night and Ultimate Fighter Finale | WATCH: Matchmakers Joe Silva and Sean Shelby on Jedrzejczyk-Gadelha

It was there that Jedrzejczyk took every opportunity to get under Gadelha’s skin, and while the Poland native and her team don’t believe that represented all aspects of her personality, fight fans have not shied away from making her one of their favorites, a fact evident by the roar she got during media workouts. 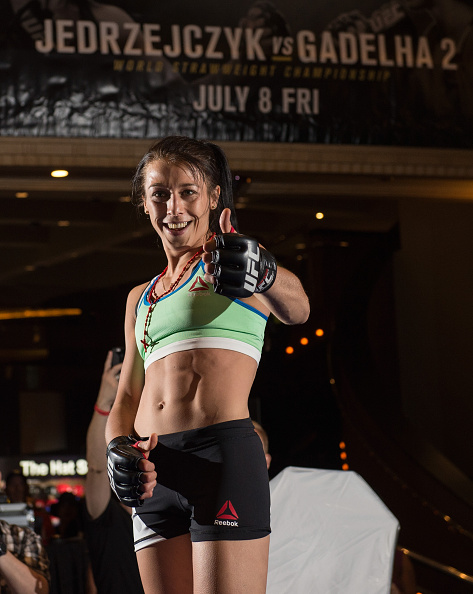 “She's a huge character,” Jedrzejczyk’s manager, Tiago Okamura, said. “We knew that once we had the chance to let everybody know the Joanna that we know, she would get a ton of fans because it's hard not to like this girl.”

The reason is probably because of the dichotomy of “Joanna Champion.” Outside the Octagon, she’s always smiling and one of the more accessible stars in the game. Inside, she’s a killer, her Muay Thai attack designed to punish and defeat all comers.

“That's part of the charm,” Okamura said. “She can go from being that cute girl that makes everybody laugh around her and plays pranks on people and has fun and enjoys life, to the girl that knows she has to take care of business inside the cage. That's one thing people forget. This girl has been fighting Muay Thai for 10 years and not making a dime before she got a chance to fight MMA. So she knows how important this is and how big this is. She doesn't take that for granted.”

And despite the emotions involved in her rematch with Gadelha, whom she defeated via split decision in December 2014, expect none of that to interfere with the task at hand, which is retaining that title and moving on to the next challenge.

“Honestly, there are emotions going into this fight, but she's good at separating things,” Okamura said. “So now, the big thing is just beating this one, just like she's beat all the other opponents. She had a good head on her shoulders, so it's gonna be OK.”