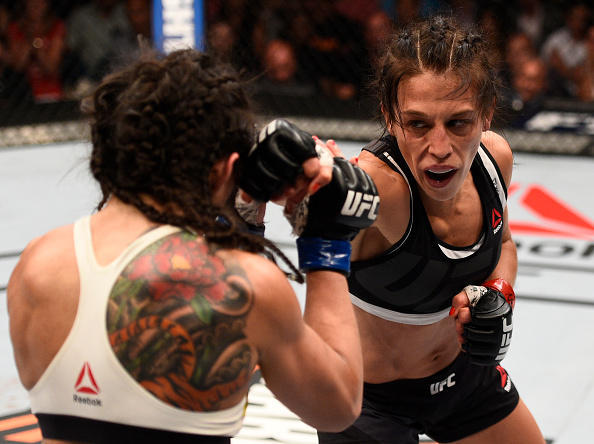 After a long year and a half wait that included six weeks on The Ultimate Fighter as coaches, Joanna Jedrzejczyk and Claudia Gadelha finally met for the second time Friday at the MGM Grand Garden Arena in Las Vegas, and their rematch lived up to its billing, with Jedrzejczyk winning a five-round unanimous decision over the gutsy Gadelha to retain her UFC women’s strawweight title for the third time.

“I feel great,” Jedrzejczyk said after her second win over Gadelha, who she decisioned in a non-title fight in December of 2014. “She’s number one, I am the champion and I have so much respect for her.”

With the heated 25-minute battle in the books, it appears that the two 115-pound stars have put their feud in the rear view mirror.

“This is very important,” Gadelha said, pointing to the championship belt. “But it’s more important to be humble and to respect people. I respect Joanna as a champion.”

Jedrzejczyk roared out of her corner pumping her jab, but after losing her footing, Gadelha pounced and took the bout to the mat. A minute in, Jedrzejczyk made it to her feet and the two locked up against the fence for a brief spell before breaking apart. Moments later, they were grappling once more, Gadelha using her dominant position to throw Jedrzejczyk to the mat. Again, the Poland native rose and punched her way free. This time, Jedrzejczyk found some extended time to work her striking, but Gadelha was not too far behind the former Muay Thai world champion, showing the evolution of her standup attack.

A brief exchange on the feet to start round two was followed by a clinch and a takedown from Gadelha, who was having an easy time getting her foe to the canvas. While there, she had an opportunity to land several hard punches to the face, and Jedrzejczyk answered in kind, which allowed the champion to get to stand up. The smothering attack of Gadelha was relentless though, and she continued to drain her opponent’s gas tank. With 1:15 left, Jedrzejczyk briefly found an escape, but Gadelha locked her back up seconds later, wrapping up the round in complete control.

Jedrzejczyk scored with a sharp right to begin the third round, but Gadelha fired back, catching the champion off guard before bringing back her grappling game. As the two battled against the fence, they traded elbows before breaking, and Jedrzejczyk began to march forward, throwing her strikes with bad intentions as Gadelha looked winded for the first time in the fight. With a little over two minutes left, Gadelha shot for a takedown and got it, but Jedrzejczyk got out of danger immediately, standing and calling for Gadelha to follow. Now it was Jedrzejczyk in control, even if a hard right from Gadelha staggered her briefly.

With the tide apparently turning, Jedrzejczyk walked confidently out of her corner to begin round four, and she peppered Gadelha with her strikes as she switched stances and controlled the distance between the two. The Brazilian wasn’t backing down, but she wasn’t looking for the takedown or clinch anymore. With a minute left, Jedrzejczyk turned up the heat, landing with hard punches and kicks as she bloodied the challenger’s nose, clearly proving to be the fresher of the two entering the final frame.

With the fight possibly up for grabs, both fighters prepared to empty their tank in the final five minutes, and after eating some hard trikes, Gadelha shot in on Jedrzejczyk in search of the takedown. Jedrzejczyk resisted and the two deadlocked against the fence, and with a little over three minutes left, Jedrzejczyk muscled her way free. Now Jedrzejczyk worked her jab and circled, not allowing Gadelha to get set, and when the Rio de Janeiro native swung, Jedrzejczyk would block the wide punches. As the bout entered its final two minutes, Gadelha made a desperate effort to drag Jedrzejczyk to the canvas, but to no avail, and it was Jedrzejczyk adding some more strikes to her total before the final horn sounded, capping an impressive and hard-fought victory.

With the win, Jedrzejczyk improves to 12-0; Gadelha falls to 13-2, with her only pro losses coming at the hands of Jedrzejczyk.