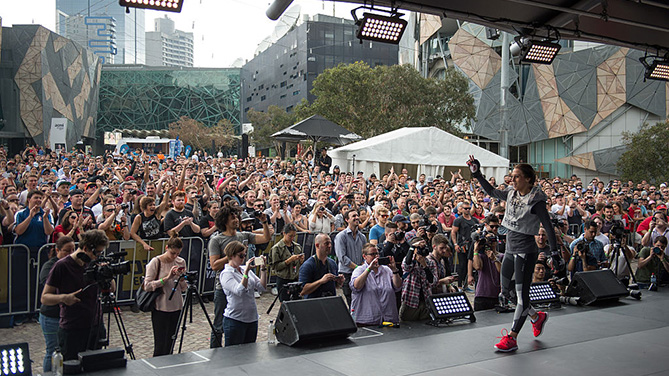 Joanna Jedrzejczyk went to Melbourne, Australia to make her second title defense in November 2015, and the strawweight champion was amazed by what she saw from the passionate Australian UFC fanbase.

At the UFC 193 Open Workouts, Jedrzejczyk showed off her skills before hundreds gathered to get a glimpse of the Polish sensation and the three other women who made history at UFC 193 as part of the first-ever, all-female main and co-main event lineup.

“The fight and the whole show in Melbourne last year was just amazing,” Jedrzejczyk told UFC.com recently. “The Australian fans are just amazing. There were so many people and they were so supportive. I felt like I went for the fight, not the open workouts.”

Down under the Aussies are some of the most adoring MMA fans on the planet, and they get their next UFC show when Fight Night: Rockhold vs. Souza takes place at the Rod Laver Arena in Melbourne on Nov. 26.

RELATED: Watch all the action from UFC 193 in Melbourne on UFC FIGHT PASS

Looking back on her fight in Melbourne, Jedrzejczyk said that she was impressed with Valerie Letourneau’s toughness. But the champ knew she was in for a tough fight from the Canadian.

“I knew that Valerie was a good opponent. She fought at 135 and I watched her fights,” Jedrzejczyk said. “She’s really tough and it was a big deal for her and for me. I won and defended my title, but it was a pleasure for me to face Valerie because she is a top-level fighter.”

Jedrzejczyk is ranked No. 8 in the UFC pound-for-pounds rankings and is the longest-tenured female champion in the UFC.

When Jedrzejczyk began in the UFC two years ago, she dreamed of winning the title and she’s worked hard to remain at the top of the sport.

“I was signed by UFC two years ago and I’ve put in work to become UFC champion. I’ve defended my title three times and I want to do it one more time this year,” she said. “I feel like I’m the same fighter – OK, I’m a better fighter, but I’m the same person.

“I was dreaming about the title and finally I am the owner of the belt. It’s like heaven – the UFC is the heaven.”

Jedrzejczyk doesn’t have her next opponent yet but she’s been lobbying to fight in New York City when the UFC makes its first trip to the Big Apple in November. The champ is always looking to do big things.

“I think we need more female divisions in the UFC and I wish we’re going to have it soon,” she said. “For example, 125 is the perfect division for some of the girls that can drop down from 135 to 125, and from 115 we can go up. The thing I want to do is – I like to do crazy things. I want to hold two belts at one time and this is what I want to do.”

Tickets go on sale for Fight Night Melbourne on Friday.