Jedrzejczyk looking to stay dominant in 2016 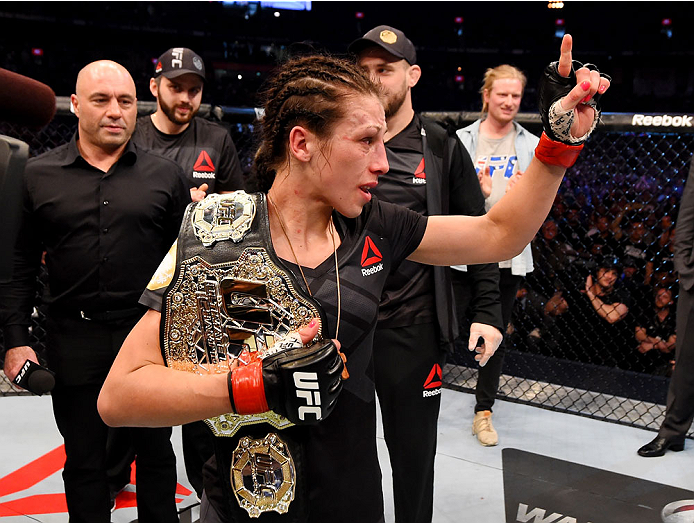 Others may have gotten more attention, but when it comes to going from obscurity to stardom, it’s hard not to consider 2015 the Year of "Joanna Champion."

Entering the year, the native of Olsztyn, Poland was a promising contender in the UFC’s new women’s strawweight division, but as she sat with a varied array of champions and contenders during a Dec. 12 media day for UFC 194, it was clear that this was a world champion who is never going back to being the fighter whose main talking point was the difficulty in spelling her name.

“I'm happy to be part of the UFC,” Jedrzejczyk said. “They are the biggest, and my biggest dream came true. I'm just a happy person as a person and as an athlete. I love my fans because I would be nobody without my fans, so I'm very thankful to all of them and I'm doing what I always train to do - give them a little bit of my life.”

Starting the year with a second-round TKO of Carla Esparza that earned her the 115-pound crown, Jedrzejczyk successfully defended her title twice against Jessica Penne and Valerie Letourneau, each win showcasing her world-class striking and killer instinct. Simply put, the 28-year-old is mean on fight night.

These two sides to her personality may be the secret to her popularity. While she is a killer with gloves on, when they’re off, she is one of the most accessible athletes in the sport today.

“I'm trying to be the same person all the time, the same Joanna,” she said, noting that while things are getting bigger for her at home, the United States fans have really embraced her.

“It's a little bit different. I have so many fans in Poland, and I'm getting more and more attention from the media and all kinds of different people. But the UFC is more popular here than in Poland. I'm happy with all of my fans, but here, it's something different, bigger and crazier.”

Bigger and crazier will certainly be the description for Jedrzejczyk’s 2016 campaign, which is expected to begin with a rematch against Brazil’s Claudia Gadelha. Beyond Gadelha, who Jedrzejczyk defeated via split decision in December, 2013, there are plenty of talented contenders. But come with the disclaimer “Are they ready for Joanna?”

That doesn’t mean Jedrzejczyk doesn’t respect her prospective foes, and she was particularly impressed with the Rose Namajunas vs. Paige VanZant bout that took place during the week she was in Las Vegas.

“It was a great fight,” she said of Namajunas’ win over VanZant. “I knew when they changed opponents for Paige VanZant, it was going to be a harder fight because Rose is a calm, humble person, but she's a real warrior and she showed Paige that she still must learn a lot. Paige VanZant is still young, but she's very talented, so in the future she's going to become a UFC strawweight world champion for sure. She's a badass, she's a tough chick, and her jiu-jitsu is pretty good, but Rose was simply the best that night.”

Joanna Jedrzejczyk is the simply the best in her division, now and for the foreseeable future. At the moment, she’s healing up from a hand injury, but once she gets the green light to fight again, she has a friendly warning for the rest of the 115-pounders.

“I will be back stronger,” she promised.