Jedrzejczyk Has Paid The Cost To Be The Boss

Joanna Jedrzejczyk wasn't in Poland for the recent Fight Night show in Gdansk. She hasn’t fought at home since May 2014, when she improved to 5-0 as a professional with a decision victory over Karla Benitez.

Back then, Jedrzejczyk belonged to Olsztyn. More than three years later, she belongs to the world, with England, the United States, Germany and Australia among the stops she’s made since beating Benitez. Leaving home is often the price one pays for being a world champion, or as B.B. King put it so much more poetically, the strawweight queen is paying the cost to be the boss.

There is often a price one pays to become world champion. As B.B. King put it, the strawweight queen is paying the cost to be the boss.

So now, the 30-year-old’s days are spent in Coconut Creek, Florida, where she trains to maintain her place atop the 115-pound weight class. There is no gritty basement serving as her place of torture, the way movies would have you expect champions to train in order to stay hungry.

Instead, Jedrzejczyk spends her days working in the state of the art American Top Team facility. A quick glance at her social media accounts shows that she still has time for the beach, bike rides, and even some hoops.

Seeing the sun shining all the time and having easy access to the beach could make one wonder whether Jedrzejczyk still has the desire to sacrifice everything in search of victory leading up to her UFC 217 bout with Rose Namajunas on Nov. 4. But those who bring up that topic don’t know “Joanna Champion.”

All I needed to hear from her came seconds into an interview we conducted after she was honored at the Polish Consulate in New York City before her UFC 205 fight with Karolina Kowalkiewicz. Jedrzejczyk had the world at her feet, celebrated by her people and embraced by the greatest city on the planet, but she never forgot where she came from.

“I was fighting for minus two thousand dollars,” she said, and that wasn’t a missed phrase from someone whose second language is English.

In other words, she paid to fly to Thailand to represent Poland in the World Muay Thai Championships, and from the start, it wasn’t about the money, it was about the thrill of competition and the victory. Nothing else mattered then, and nothing else matters now. Yes, she’s gotten better as a fighter, but her mindset remains unchanged.

“I'm professional,” she said last year. “If you talk to my coaches, they will tell you. People sometimes think that champions are rude, they sleep on money or it's all about the hype and the sponsorship. It's not, believe me. Every day when I walk to the gym, I keep my eyes open, I keep my head down, I'm very humble and I'm a hard worker. I like to challenge myself, I like to learn every day and I respect everyone because I want to be a better person. I promise myself that the next day I must be a better person first and then the best athlete in the world. I'm trained to work hard. Tomorrow, I have to come back and do this better. That's why I'm the best in the world. Of course, MMA is a beautiful sport but a very brutal sport. We win, we learn, we lose because the KO or submission can finish the fight and anything can happen. But I'm ready for that and before every fight, I visualize my victory.” 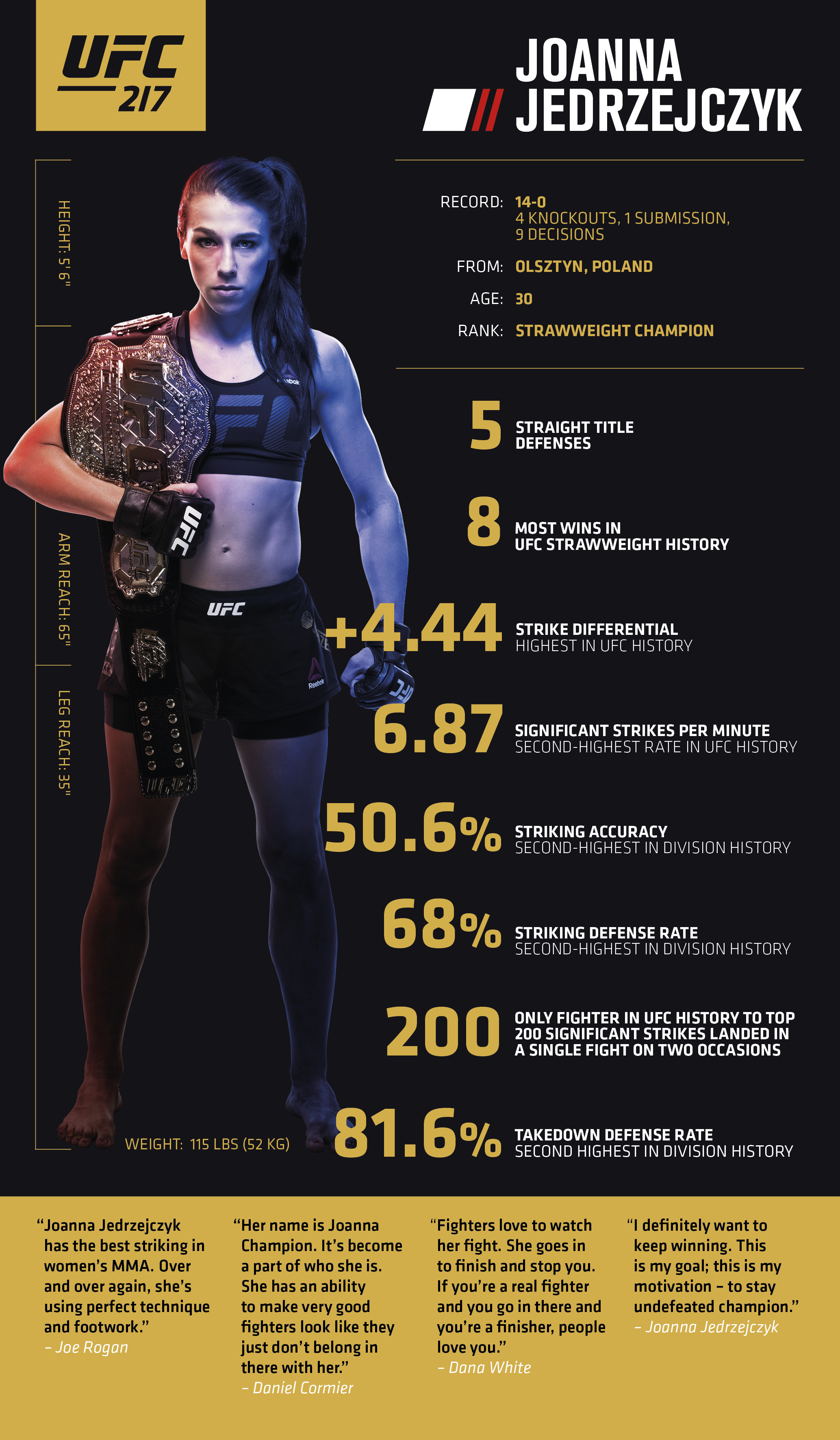 With one more victory, Jedrzejczyk will break her tie with Ronda Rousey for most wins in UFC women’s title fights, and move into a first-place deadlock with the former bantamweight champion for most successful title defenses by a woman in the Octagon.

So where does that place her beyond the numbers? There is no denying the impact Rousey has had on the sport as a pioneer. That will never fade and her losses to Holly Holm and Amanda Nunes can’t change the fact that from 2013 to 2015, Rousey was unbeaten and unbeatable, a force of nature on fight night like a prime Mike Tyson.

But from 2015 to 2017, Jedrzejczyk has reigned with iron fists, feet, elbows and knees. She has nearly cleared out her division, and her tally of title defenses among current champions is second only to the all-time leader, Demetrious Johnson. On Nov. 4, she can make a statement that she is the most dominant female champion ever.

And while there will be cases to be made by the likes of Amanda Nunes, Cris Cyborg and Holly Holm in the coming years for such a crown, at the moment, there is Joanna and Ronda at the top of the list, and it’s Olsztyn’s Jedrzejczyk surging into the lead. If she decides to add ten pounds to chase after a flyweight championship in 2018, a belt-winning effort at 125 pounds would secure her status as the UFC’s best ever, and then there would be no dispute.

That’s the way Jedrzejczyk likes it. No questions. Undisputed. Joanna Champion forever. Just like she spelled it out before her May win over Jessica Andrade.

Thomas Gerbasi is the editorial director for UFC.com and the author of the UFC Encyclopedia and UFC: A Visual History. Follow him on Twitter at @tgerbasi