Joanna Jedrzejczyk has always been intense on fight week, building to a ferocious crescendo when the Octagon door shuts and it’s just her and her opponent. This time around, as she prepares for her Saturday rematch with Rose Namajunas, the intensity appears to have kicked in earlier, but this fight against the woman who took her strawweight title isn’t about what you think it might be. In other words, it’s not about what James Brown called “The Big Payback.”

“It was never like, oh, I want to quit or she’s better,” Jedrzejczyk said of the aftermath of the first loss of her career at UFC 217 in November. “Of course she became a champion and she’s the champion right now and she’s a great fighter. But the thing is that I’m surrounded by good people, and my coaches – Katel Kubis, Mike Brown – they make me strong. The same night, in the locker room after the fight, they were like, ‘You’re bigger than that. Keep your head up.’ And today, I read some part of an interview with Ronda Rousey, and she said that Travis Browne, her husband, is a big support to her. And he said, ‘You’re bigger than that, so keep your head up.’ That’s the thing, that’s why we are different, that’s why we become champions. We can take the loss and the thing is, I know all my life, I’m not sick about the revenge, about taking on Rose Namajunas. But I knew I could feel bad if someone was fighting for the belt.”

So almost as soon as the first fight with “Thug Rose” was stopped, Jedrzejczyk was in search of an immediate rematch. There would no move to the flyweight division or a tune-up fight to get her confidence back. It was Namajunas or nothing, and the UFC agreed that her body of work and long reign over the 115-pound weight class earned her that right. So all she had to do was wait for the phone call from matchmaker Mick Maynard.

“I got an offer, and I was like, ‘Hey Mick, give me a second, I’ll call Mike Brown, but I’m already gonna say ‘Yes’ to you. I’m taking this fight, but let me call my coach.’ I called Mike Brown and talked to him and Katel Kubis and they said I’m more than ready, we don’t need time. We don’t need to hide.”

And Jedrzejczyk hasn’t gone into a dark room for the last five months. As visible, affable and accessible as she’s always been, the Poland native has accepted that in the fight game, no one stays unbeaten forever. Sometimes you show up and everything goes haywire, an opponent has your number, or it just isn’t your night. For the 30-year-old, everything went as well as it possibly could in the lead-up to the fight at Madison Square Garden. Then came the final day of her weight cut.
Order UFC 223 | Brooklyn Tickets | UFC 223 Embedded | Inside The Octagon

It’s a lesson she’s tired of discussing, mainly because her honesty about how the weight cut affected her on fight night has been seen by an excuse by some, giving her a harsh lesson in the fickle nature of this business.

“I don’t want to talk anymore about the past and what happened before the fight,” Jedrzejczyk said. “I will talk about the first fight with Rose Namajunas after I beat her on April 7. And I will tell the truth again. Because I don’t want people to say, ‘She’s looking for excuses.’ For 15 years of my fighting career, I’ve never been looking for excuses. But I know how the weight cut impacted my performance that night and it’s a shame that a lot of fighters are saying it’s my excuse. I don’t wish for any one of them to have a weight cut like this and feel like crap the next day, the day of the fight that you have been preparing for 10, 12 long weeks, far away from your family with no excuses. So I’m not complaining. Someone made a mistake, but it was not my fault. My coaches and me went through the whole camp, and the last 30 hours, we know what the issue was.”

Suffice to say, even before Friday’s weigh-in approaches, Jedrzejczyk is confident that what happened last year will not be an issue again. And the lesson she learned is one she is grateful to have received. 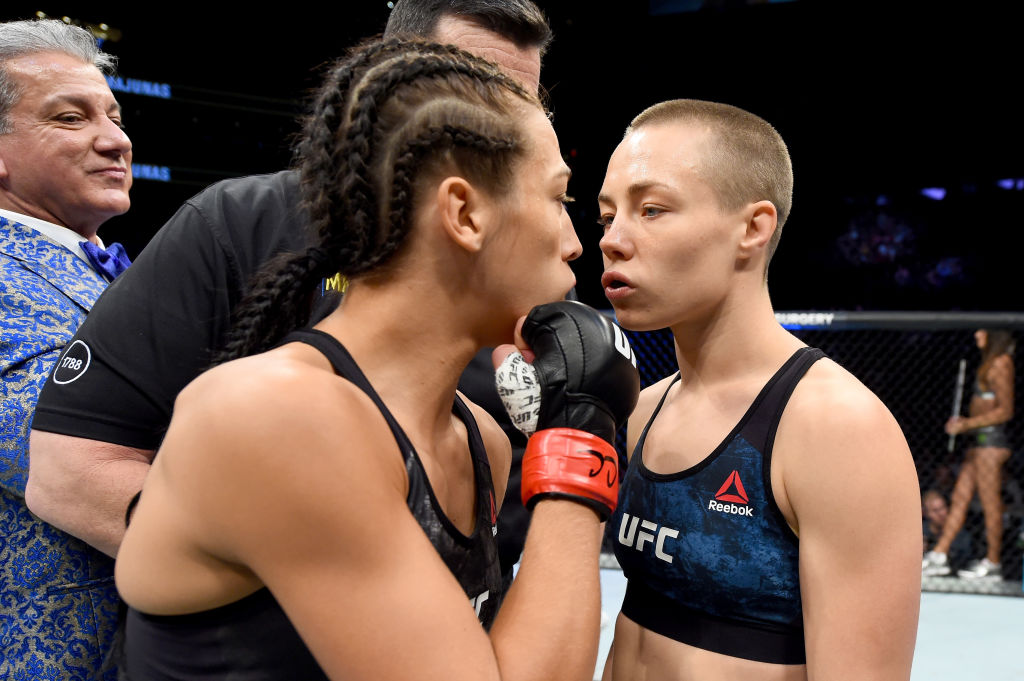 “I was going to expect more from myself and the people who are working with me,” she said. “If you are not good enough to work with me, sorry, there is no spot for you to work with me. I gave people too much trust. The whole camp and being a fighter, it’s all about trusting your coaches, dieticians, managers. But at the end it doesn’t matter if you’re a beginner, a little advanced or at the top, you cannot blink. You must keep your eyes and ears open and pay attention to everything going on around you. And this is what I learned from the last fight.”

She sighs. At the time of this interview, camp was coming to a close, the media obligations were ramping up, and it was almost time to leave Florida for Brooklyn. It’s an exhausting schedule, and it’s no wonder why 99.9% of fighters call the actual fight the payoff for the weeks that lead up to it.

“I put in such great work, every day in the gym and outside the gym, preparing my meals, cleaning after these meals, and I don’t even have ten minutes of free time for myself,” she said. “But in the end I will know the price I paid for the success. I’m at the end of the camp. I feel like crap, I’m super tired. But I know that I haven’t wasted any single day of this camp. I’m waiting for hour zero, and I will show up in the best shape ever. And if they wanted me to fight last week, I would accept.”

She means it, antsy to get back what she believes is still hers. But ask Jedrzejczyk what she misses about having the belt, and she gives a surprising answer.

“Actually, nothing,” she said. “My legacy is still very big, and I know that people, after someone falls, are happy. Now we can laugh at this person. But you know what, I got more love than before and I’m surrounded by good people. I got closer with my fiancé and my family and my friends and my team and my coaches. I see only the good side of it. I don’t care about the money, that I will make less money or more money. I’ve been doing this for 15 years. And this is going to be something bigger than it was before.”

Jedrzejczyk may not be “Joanna Champion” today. But on Sunday morning, she expects to go home with that title once more. Of that, she has no doubt.

“I’m very happy that I can take on such a good, young talented fighter, and there is no more pressure on me,” she said. “The pressure is on her and I just want to enjoy this process. I was doing this for the last nine weeks, I want to enjoy this process and become a champion again. I know that Bruce Buffer will say, ‘And the new…’ but the real thing is, ‘And the real…’”