Jedrzejczyk And Penne Exchange Gifts and Taunts At Weigh-ins 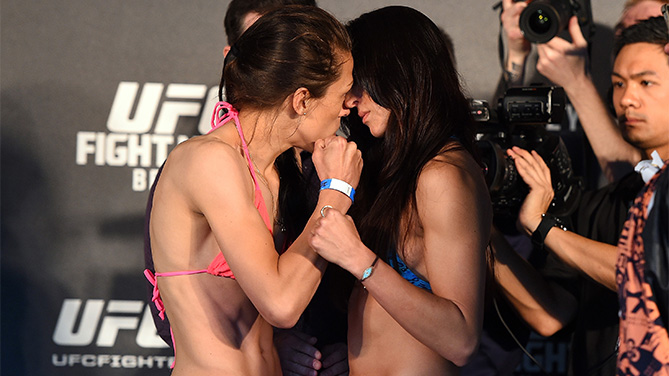 Emotions ran high between rivals Joanna Jedrzejczyk and Jessica Penne at the UFC Fight Night weigh ins in Berlin, Germany and threatened to boil over in a taut exchange of gifts.

It began from the moment Jedrzejczyk, the reigning UFC strawweight champion from Poland, entered the stage on Friday at 02 World , stripping down while blowing kisses at the Californian. Penne, the challenger, never took her eyes off the Polish fighter. Having made the 115-pound limit, the champion stormed over to Penne and the intense face-off began.

With their heads pressed together throughout, the tension was palpable as Jedrzejczyk delivered her trademark stoop. Yet the former "The Ultimate Fighter" contender refused to flinch and matched her opponent's intensity. 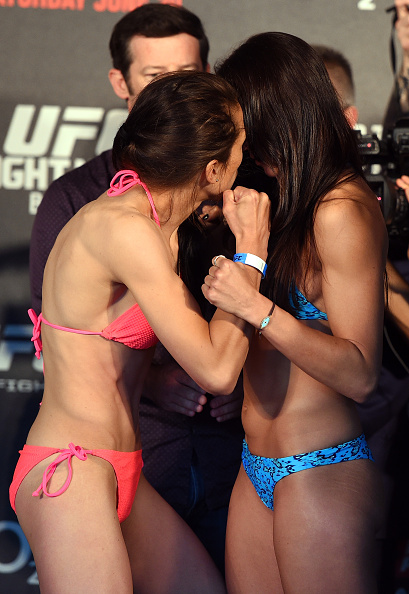 The American threw it to the crowd without a second thought. In fact, the former Invicta champion had a gift of her own offering up a gold ring. This was not just any ring, but was a direct reference to the champion's alleged resemblance to Gollum from "The Lord of the Rings.”

Incensed by the 'gift', Jedrzejczyk immediately slapped it out of Penne's hand as tensions threatened to escalate.

Before leaving the stage, Penne declared, "No matter what happens I’m prepared for anything,” to which Jedrzejczyk replied, "it’s going to be a real war.”

As the pair departed, their distaste for one another clearly has left fans waiting anxiously for the real encounter.

You can watch their clash, the first-ever title fight on UFC Fight Pass, live on Saturday.