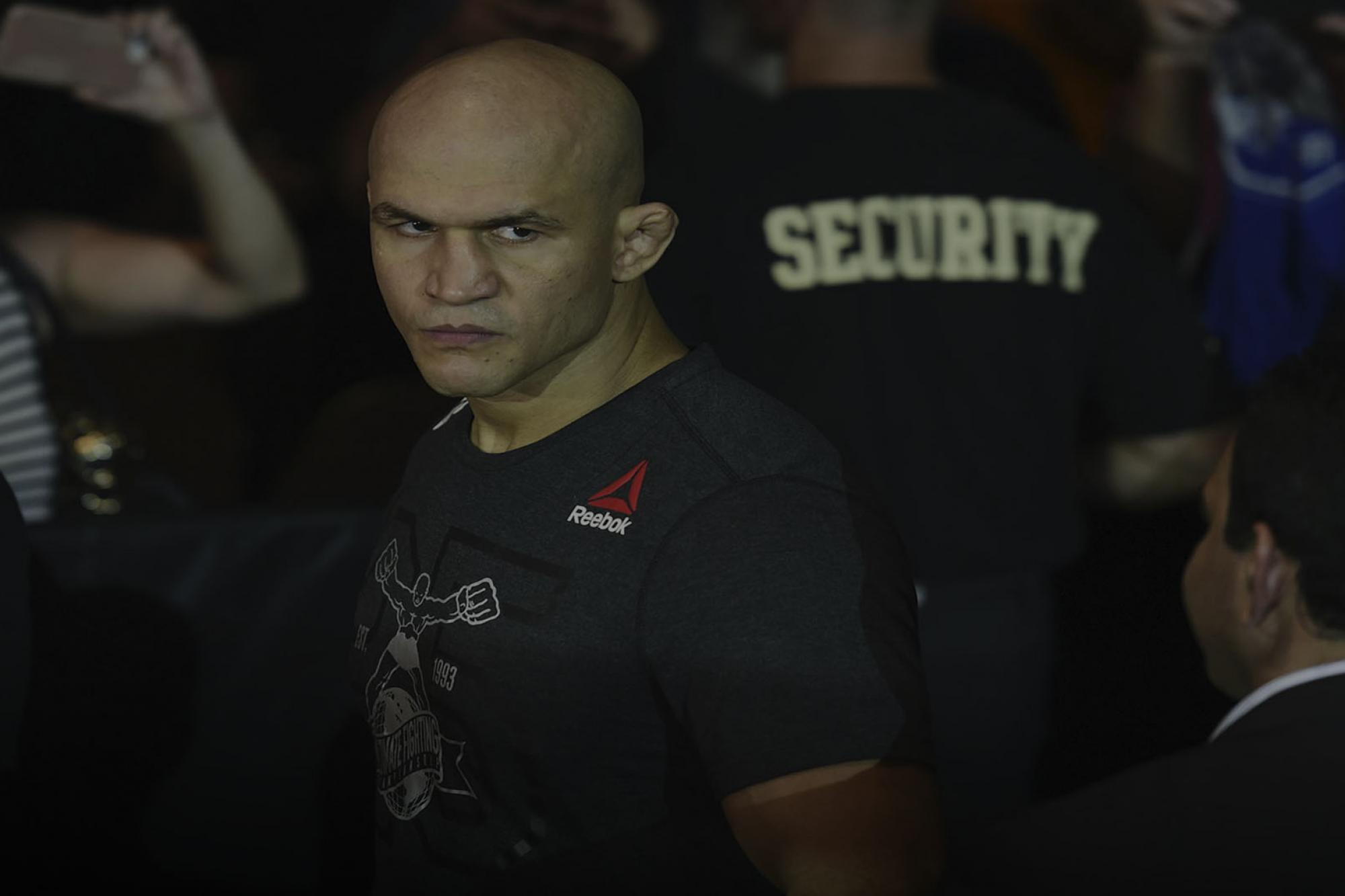 JDS Has No Doubt He Can Take Back The Heavyweight Division

When Junior Dos Santos steps into the Octagon on Saturday evening to square off with Tai Tuivasa in the main event of this weekend’s return to Adelaide, Australia, it will mark the first time in five years that the former heavyweight champion has competed twice in the same calendar year.

“My biggest goal — and I’ve been saying this for many years, but I still haven’t been able to make it happen — is to fight three fights per year, which is a very normal number,” said Dos Santos, who defeated Blagoy Ivanov by unanimous decision in July. “It’s very important to me to have this second fight in the year happening because I need to make things happen.

“I’m 34 years old now and I was having one fight per year some times because of many different things, but the most important thing is that I’m fighting for a second time this year. I’m making things happen in my career.

“I’m having my second fight of the year and I’m working hard to make sure I get that win on Saturday night and then move forward and fight very soon again.”

In addition to his general desire to want to compete three times a year, part of what has the Brazilian standout so motivated to get things moving in a positive direction again is that he spent nearly a year on the sidelines, unable to compete after being flagged for a potential anti-doping violation.

From the outset, Dos Santos maintained his innocence and he was eventually cleared of any intentional wrongdoing and declared eligible to return to the cage, but in the time he was gone, the heavyweight division experienced some seismic shifts.

Alexander Volkov, Derrick Lewis and Curtis Blaydes all continued collecting victories and climbing the rankings, while Francis Ngannou earned a title shot, got beaten by Stipe Miocic at UFC 220 and then looked lost against Lewis in his return to action.

A week before “Cigano” was set to return, Miocic fell to Daniel Cormier, leaving the upper tier of the heavyweight ranks in flux as Dos Santos prepared to take on Ivanov.

“That was a very important moment for my career because I was coming back from that very weird situation that I never thought in my whole life that I would go through, but it happened to me,” he said regarding his fight with the UFC newcomer in Idaho. “I was looking forward to being in the Octagon again, to be competing again.

“Everybody from the fight world knew that he was a tough guy and we came to that fight where my biggest goal was not to let anything interfere in my performance in a negative way. The fight was very tough — as tough as we were expecting — but I’m very happy that we could win the fight and move forward.”

For the second time in as many fights, Dos Santos will share the cage with a relative newcomer on Saturday, squaring off with the undefeated Tuivasa, who has gone 3-0 in the Octagon.

After spending the previous seven years in the thick of the title chase and standing across the cage from some of the most recognizable names in the heavyweight division, the back-to-back assignments against comparative neophytes was a little surprising to Dos Santos, who wondered if the UFC was looking for him to “put over” the newcomers, to borrow a professional wrestling term.

Not that he would ever consider turning down an opportunity to step into the Octagon.

Earlier this week, the headlining duo took part in a “Welcome to Country” ceremony by some of the indigenous peoples of Adelaide at the city’s Botanical Gardens.

In addition to taking part in the Australian ritual, it was the first time Dos Santos and Tuivasa had met in person and although they will be trying to knock each other out on Saturday evening, the tandem had a ton of laughs together during their first encounter thanks to a baby kangaroo and a photographer who may or may not have known they’ll be fighting one another this weekend.

“It was the first time I met him in person and he was nice,” Dos Santos said of the gregarious Tuivasa, who has become an immediate fan favorite thanks to his oversized personality and post-fight “shoey” celebration. “We were laughing a lot because nobody understood what the photographer was asking for because he asked me to hold the baby kangaroo and then he asked Tai Tuivasa to hug me.

“What is that?” he added through uncontrollable laughter. “It’s like a family (portrait), you know? I don’t know if this guy knows we’re fighting each other, so everybody started laughing.”

Watch the highlights from the Fight Night Adelaide open workout.

Though they shared some awkward moments and entertaining times on Monday, it will be all business when the two step into the Octagon in this weekend’s main event, and Dos Santos is well aware that Tuivasa is a tough customer who will be coming forward, looking to land with impunity.

But he’s more than ready and expects that he and Tuivasa will close the show in spectacular fashion.

“Right now, I’m coming hungrier than ever because in my mind, I don’t have any doubts that I can beat all of them,” said Dos Santos. “I can beat all these guys. I have everything that it takes to be the No. 1 in this division.

“The way I’m going to win this is by using my biggest weapons — my boxing skills and my speed,” he added. “I don’t just go in there and throw hard punches; I move and position myself and take advantage of that. I can throw hard punches from good angles.

“That’s my biggest advantage in this fight and I will use that for sure.”

And when it’s all said and done, he and Tuivasa will sit down, enjoy a beverage together — possibly out of someone’s shoe — and try to figure out who will have custody of the little joey from their impromptu family picture session on Monday.

“The kangaroo is going to stay with me,” he said with a laugh. “I’m going to bring him to Florida.”