Just In Time For Black Friday! Limited Editions Of Your Favorite Fighters.
By Thomas Gerbasi, on Twitter: @TGerbasi • Nov. 24, 2020

I don’t want to give my age away, but let’s just say I remember when action figures were called dolls and the “action” part of it, if there was any, meant that arms and legs moved up and down. Again, that was if you were lucky.

And as far as likeness to the character went, that was hit or miss, mostly miss.

Oh, how times have changed, and when I found out that UFC had teamed up with Jazwares to produce a new line of branded toys, most notably a realistic line of action figures, I was all ears – and eyes – considering that in 15 years with the UFC, the only thing I’ve gone out of my way to collect have been the promotion’s action figures.

Yes, I have them all, even the limited Kimbo Slice figure with a quote from yours truly on the back.

So what’s on hand for the UFC fan on your holiday shopping list? Read on, and no, I won’t tell if you buy any of these items for yourself. 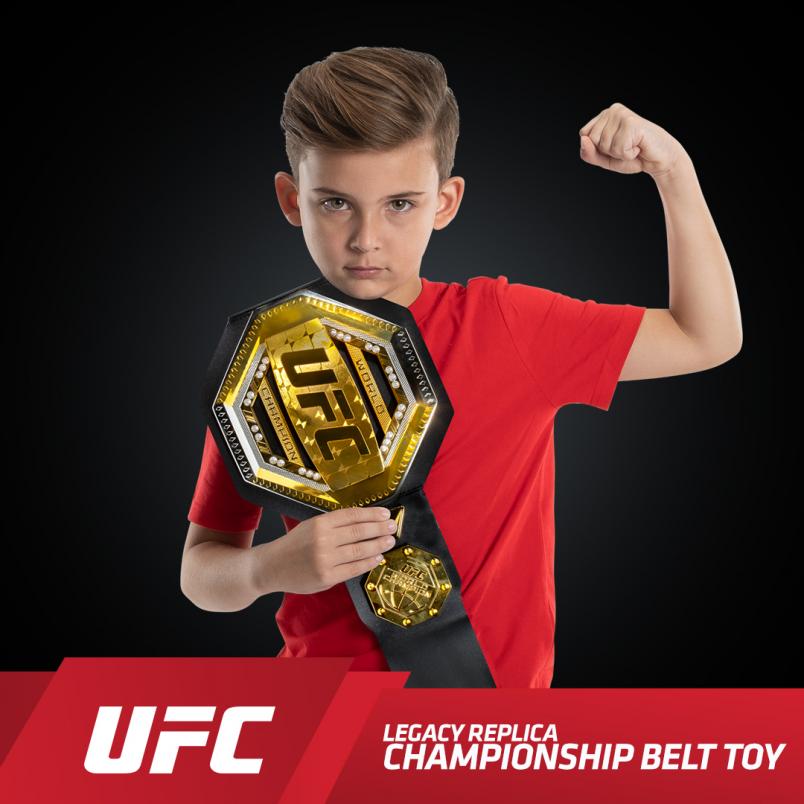 Now this is just cool. Whether you hang it on a wall, display it on a shelf or use it as a centerpiece for a UFC party, this replica of the newly designed UFC championship fits the bill for all ages. But if you were like me and my buddies growing up in Brooklyn back in the stone age, there would be tournaments on the sidewalk to see who went home with this belt. Take that back – don’t try that at home, kids. Seriously, though, this was a hit with my son-in-law when it arrived in the house, and he’s 23, so this is an all ages gift that really looks cool even if you’re not wearing it around the neighborhood. And if you do, hey, more power to you. 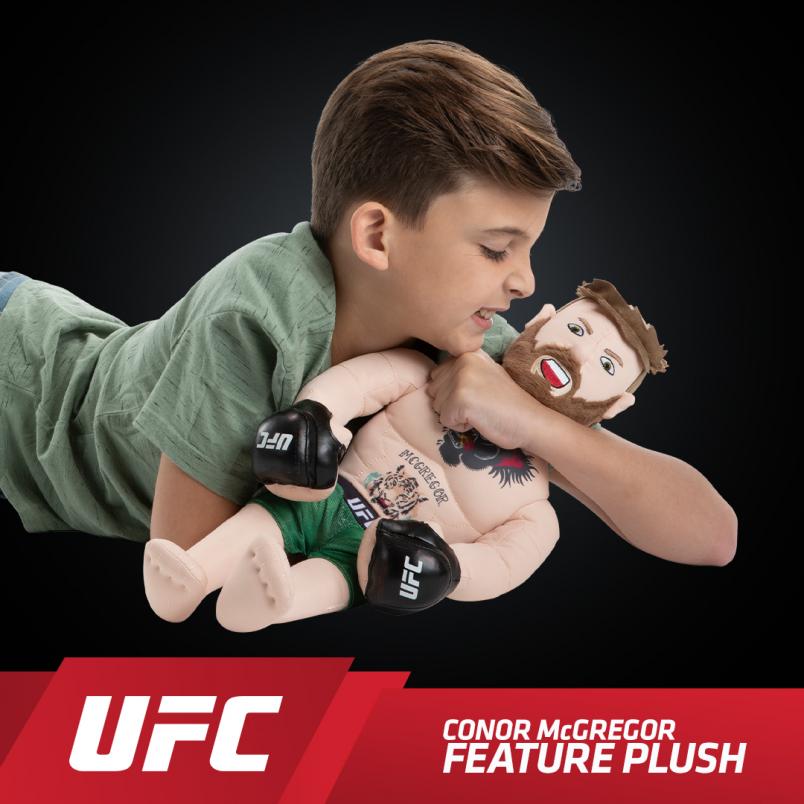 Warning – this is the kind of toy that can get you evicted from your home…by your wife. Maybe I’m a little over the top with my plush version of “The Notorious” Conor McGregor, making sure I play “Precision beats power and power beats speed” around the house as much as humanly possible, but that’s me. Nuts and bolts time – this is a plush version of Irish superstar Conor McGregor, and again, I’m giving away my age, but how cool would it have been to have a Muhammad Ali toy like this that would yell out “I am the Greatest” when you moved him? So kids, you have it good, because not only do you get a representation of your favorite fighter, complete with tattoos – maybe a first for a plush toy – but it’s motion sensitive, so if you punch it or grab its arm, one of 11 sound effects or quotes will follow. Everything from a grunt due to getting hit and a war cry, to one of McGregor’s notable quotes and even the UFC theme, there’s plenty here to keep you busy. One note – if you buy it, it’s on demo mode, so you need to switch the box in the toy’s back to the on position to get the full experience.

As Bruce Buffer would say, “It’s Time!” for the main event of the evening. Like I noted earlier, I have the entire UFC action figure collection, so I’m a little pickier than most when it comes to such matters. And Jazwares nailed it with this first set of UFC action figures (they’re not dolls!), which contains Daniel Cormier, Donald Cerrone, Khabib Nurmagomedov, Jon Jones, Conor McGregor and Max Holloway. From the clean packaging that will appeal to collectors looking to display them in the box, to the actual look of the figures themselves, this is definitely next level stuff in the action figure genre. That shouldn’t be surprising coming from Jazwares, a rising star in that field that already has the license for Fortnite figures and is producing figures based on the Marvel Avengers and AEW pro wrestling brands. But you never know how the end product is going to turn out. Well, the UFC figures are great, whether to display, keep in the box or actually play with, and what makes them work is the detail. Each fighter comes with his own country flag, real cloth shorts, and two heads and two sets of hands. Why? Well, the hands represent open hands and a closed first, and the heads will normally be a calm face and one from the heat of a fight. The Nurmagomedov figure’s alternate head has his traditional papakha hat, a nice touch for the longtime lightweight champ, and there are also championship belts for the champs and a cowboy hat for “Cowboy” Cerrone. These were details missing in previous figure sets, but what really makes these figures is that if you are playing with them or setting them up in fight stances for display, each one has 32 points of articulation. That’s a big deal for an action figure to actually be able to display action, and these figures got it right. My younger self is jealous. The figures are also sturdy enough to withstand a career’s worth of five-rounders from whoever is playing with them and still look good enough to put them back in the box and show them off. That’s what I call a win-win.

To purchase any of the items reviewed above, visit UFCStore.com, Amazon and Ringside Collectables