Jay Perrin Sees A 'Perfect Opportunity' Ahead Of Him

Despite An Opponent Who Is Getting The Bulk Of The Attention, Jay Perrin Is Buzzing With Confidence Ahead Of UFC 282: Błachowicz vs Ankalaev
By Thomas Gerbasi, on Twitter @tgerbasi • Dec. 8, 2022

Jay Perrin has been around the fight game long enough to know when he’s not the A-side in the court of public opinion.

Saturday is one of those times, as “The Joker” is tasked with being the first UFC opponent of the youngest fighter in the promotion’s history, 18-year-old Raul Rosas Jr. And given the historic nature of the UFC 282 bout, the lion’s share of the attention has gone to the teenager from New Mexico, who earned his contract and extended his unbeaten record to 6-0 with a decision win over Mando Gutierrez on Dana White’s Contender Series in September.

That’s understandable, and no one understands it more than Perrin.

“There's no expectation of me,” said the 29-year-old New Englander. “Everybody just expects that I'm a bum and I'm gonna lose. That's what they expect, so all the pressure's really on Raul here. You're this big star, everybody expects all these amazing things from you, and if you don't come out and beat me, then what are you? It's the first time he's ever fought a person that isn't going to kowtow to him and he's going to be in front of the biggest crowd he's ever been in front of. So all of that is pressure towards him, not me.”

Perrin’s confidence is understandable. He’s been fighting since 2012, a pro since 2014, and while he lost his first two UFC bouts to Mario Bautista and Aoriqileng, he’s acquitted himself well enough that he got presented with the biggest fight of his career against an opponent 11 years his junior.

“I think it's his age that people are enamored with and not exactly his entire skill set,” said Perrin. “His jiu-jitsu is wonderful. It's a very good tool, it's probably his best tool. His striking is bad, and his wrestling is okay. So I think he still has a lot of room to improve. His submission game is obviously pretty good, but other than that, I just don't see where he's this world-killer that people are describing him as. And again, he's 18 years old, so obviously he'll get better with time. But where he's at right now, I just don't see anything incredibly super special.”

What Perrin does see in Rosas is an opportunity. He’s fighting at T-Mobile Arena in his adopted hometown of Las Vegas on one of the biggest shows of the year, and if he wins, that changes things substantially for him heading into 2023. 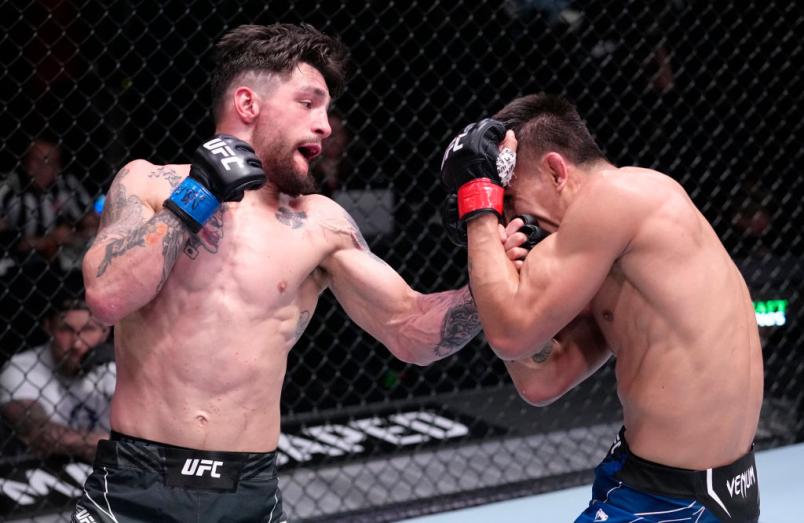 “It's a lot more eyes on me and it's the perfect opportunity stylistically for me,” he said. “It's a very good fight. All fights start standing and I damn sure have better hands than the kid, so I think with all the eyes on me, it's a great opportunity for me to showcase all of my skill set, and I can legitimately get a finish here. So all those eyes on him means all those eyes on me, and if I take a little bit of that hype away and make some of my own, I intend to take advantage of the opportunity.”

As for those believe Perrin to be a sacrificial lamb for the rising star because of his 10-6 pro slate, he’s unbothered by any such talk.

“You can say what you want about me and my record, but I've never taken an easy fight,” he said. “There's never been a fight that I haven't been at least to my level or above. He's feeling himself for sure, I can tell that. He's exuding confidence and borderline arrogance. But what happens when you try to shoot and that takedown doesn't work the first, second or third time? There's no jiu-jitsu if you can't get me down there. What happens then? I'm gonna watch him break. I know it.”

Again, the confidence on the side of Perrin is unmistakable, and while a lot of it comes from his belief in his experience on fight night, he also looks to life experience that Rosas may not have to get him through any rough patches. And if he has his way, it will be the UFC newcomer who will have to deal with deep waters on Saturday night.

“You have to remember, he is 18 years old - he is not fully developed maturity wise,” Perrin said. “Think about the emotions on an 18-year-old and how you thought when you were 18 and now put yourself in this position. He's still an 18-year-old kid, and he's never faced adversity in his entire career and for the first time he will face real adversity, because if I am nothing else, I'm a dog. We're gonna see how he handles that because if you take a back step, I'm gonna swallow you whole.

“Not to say he didn't have his struggles, but I don't think he's been knocked down enough to know how to get back up correctly again,” he continues. “I'm almost 30 years old, and my life has been dreadful at certain points, but I always picked myself back up. Third round, we're dead even, we're both dead tired, but which one is gonna stop coming? It's gonna be a mentality thing, and it's how you handle that situation and how you adapt to things, and I don't think he's ever been forced to adapt. And that's what's gonna happen in this fight. He's gonna be forced to change his gameplan.”

Get the impression that Perrin likes this fight?

“I do like this fight,” he said. “Absolutely, I do. A hundred percent.”