Jay Perrin Believes In The Path He Is On

Jay Perrin Understands The Ups And Downs That Come Along With Being A Mixed Martial Artist and It's Part Of The Reason Why His Mentality Is So Strong Every Time He Fights
By Thomas Gerbasi, on Twitter @TGerbasi • Aug. 19, 2022

UFC bantamweight Jay Perrin hates losing more than most, but he also understands that in a sport with four-ounce gloves and a million ways to reach victory or defeat, a loss or two (or five) may be inevitable if you stick around long enough.

“I'm not Khabib (Nurmagomedov), I'm not gonna be 29-0, I get that,” Perrin said of the newest member of the UFC Hall of Fame. “I'm in the most stacked division in the world, in my opinion, so wins and losses come and go, but as long as you win more than you lose, you're good.”

Perrin, 10-5 as a pro, has won twice as many times as he’s lost, and entering his Saturday bout against Aoriqileng, he’s had his hand raised in seven of his last nine bouts. Not bad for a fighter on the rise who got the whole “unbeaten” thing out of his head early.

“Once you've lost, you know what it's like, and there is no pressure to be undefeated,” he said. “And the greatest people of all-time, minus Khabib obviously, lose. (Mike) Tyson lost, (Muhammad) Ali lost, Anderson Silva lost. They all had losses and they came back and became legends in their own right. Once you're defeated and lose that zero, a little bit comes off of it, depending on how big the streak is, but that's something you don't have to worry about. I lost my third professional fight, so it never really sat with me like that.”

The Lowell, Massachusetts native had some struggles early on. He was 3-3 after his first six and the idea of earning a place on the UFC roster didn’t seem to be too realistic. But he pressed on, put together a nice run, and while a 2019 bout on Dana White’s Contender Series resulted in a decision loss to Dwight Joseph, two wins later he got a short notice call to face top prospect Mario Bautista in February and took it. That bout resulted in a decision defeat, but he made enough of a good impression to stick around. And that’s one of the positives “The Joker” took away from his UFC debut.

“I am more secure in knowing that I went head-to-head with a guy who is gonna be a name in the division in a very short amount of time,” said Perrin, who got a full training camp for this weekend’s UFC 278 bout. “And so, with the amount of preparation I've had, I left no stone unturned, I've done every literal thing that I can to be prepared for this fight, day in and day out, so I guess what's different is I'm more confident in the preparation. Not that I wasn't ready to fight in the last one - I was, and I performed the best I could, but I didn't have time for the opponent, I didn't have time to get in a certain mentality with things, so I just think that the time has given me enough to properly prepare in every facet that I can.”

Since his three-rounder with Bautista, Perrin stayed in the gym in his adopted hometown of Las Vegas. He took a couple days off to recover, then it was back to work. And six weeks out from his visit to Salt Lake City, he was raring to go.

“I do what I love to do, so it's hard for me to complain about it, and I know I feel ready six weeks out. I'm already lean, I'm performing the best I've ever performed in the gym. It's time to go. I'd just like to get in a fistfight now.” 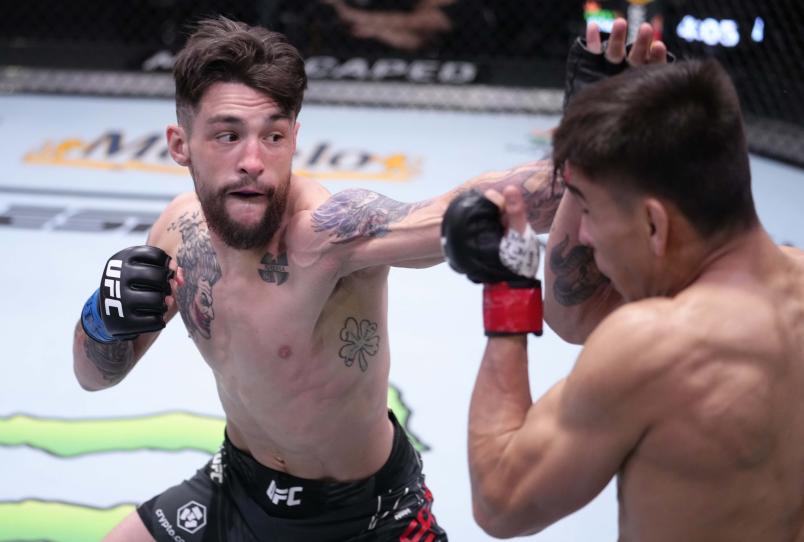 He’s had to wait, with that fistfight a day away, but he’s kept his focus a long way from his home in New England. It hasn’t been easy uprooting everything to chase a dream, while also trying to keep a long-distance relationship with his lady strong, but he’s making it work, even if the folks back home don’t fully grasp the sacrifices he’s making.

MORE UFC 278: Reasons To Watch | How To Watch In Your Country | Public Events Schedule

“I come from a poorer place, and I've gotten to this point where I'm not relatable to the people that come from there anymore,” he admits. “Before, I was a kid from there that was doing good things, and they could relate to me because they hung out with me every day, and now I'm a stranger. So when I go home, it's not like I'm celebrated or people really want to see me, because they kinda hate on me now. So I don't miss certain things about New England. I love that I'm from New England, and eventually I'll go there. I have a lady friend that I miss a lot over in Massachusetts right now who's waiting for me, so that's one thing I really do miss about it is just going to see my significant other. But I expect the other stuff from people. The more successful you become and the less relatable you are to somebody, the less likely they're going to be on your side.”

Perrin, 29, does have plenty of support, though, whether it’s from family and friends back home, his new circle in Las Vegas, or complete strangers on the internet. But wherever it comes from, it’s a good thing for him.

“At first, I was really kicking my own ass about it,” he said of the loss to Bautista. “But I went online and I got a ton of support on Twitter and things like that. I took that guy on six days' notice and people know that Mario's good, so I think what helped me is that people really were supportive, like, ‘Hey, man, you put on a great fight, we were very entertained by it, I can't wait to see what you do when you can actually prepare.’ So I took positives away from it. There's obviously adjustments that I could have made, small details that I could have done in the fight that maybe would have swayed it my way a little more, but just wallowing in it never helps. Not taking anything from a loss is a loss, in and of itself. So I figured out what I needed to address and that's what we've been working on for four months.”

FREE FIGHTS: Usman vs Masivdal 2 | Usman vs Edwards 1 | Costa vs Romero | Rockhold vs Weidman | Edwards vs Diaz | Usman vs Covington 2

And as Lowell’s most famous fighting export, Micky Ward, proved, wins and losses aren’t the be-all end-all in this game. It’s how a fighter makes you feel. Jay Perrin agrees.

“As long as you're entertaining and you make people want to watch you, then I feel like you'll be successful and remembered for a while,” he said.