"I’m definitely bringing it. I’m back in the UFC – the
biggest promotion – which is great, and I feel I match up well with
anybody in the division." - Jay Hieron 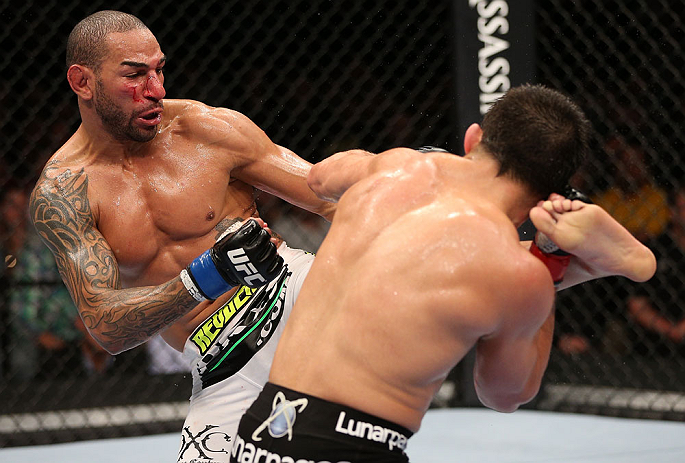 Jay Hieron’s fighting career mirrors the initial path he took to the cage – trying and difficult, but one that builds character and resolve.

Over the last 10 years and 29 fights, the Freeport, New York native who now calls Las Vegas home has fought in every major organization that has set up shop in the United States, and a handful of the best regional promotions too.

He scored a win over Adam Lynn at WEC 15, won welterweight gold in the IFL, and defeated Jason High at Affliction: Day of Reckoning before posting two wins under the pre-Zuffa-owned Strikeforce banner. After that, Hieron worked his way through a Bellator tournament, and made a one-fight stop on the regional circuit again before returning to the UFC for the first time in seven years (plus two days) when he shared the Octagon with Jake Ellenberger this past October.

It has been a long and winding road back to the biggest stage in the sport, but it’s all just another stretch of land in the journey of the fighter whose driver’s license reads James Hieronymous.

“I kind of wish I had stuck with the Hieronymous; it kind of sounds like a gladiator,” laughed Hieron, who shorted his surname when he began fighting. “My whole life growing up in wrestling, I just didn’t want to come into a professional sport – I knew they would have gotten it right after a while, but it’s still a name that you’ve got to say over and over again. I cut it short to Hieron and people still get that wrong, so it’s all good. Jay Hieron is what it is; short, to the point, and I’m rolling with it. But Hieronymous does sound like a gladiator.”

Adopting a “nom de punch,” if you will, weren’t the only life changes the now 36-year-old fighter has made over the years, much of which Hieron detailed in a 2008 multi-part series for the Xtreme Couture website.

After a strong high school wrestling career at Freeport High School, and a Junior College National Championship in 1997 (158-pound division) with Nassau Community College, Hieron moved on to nearby Hofstra. He had his sights set on Nationals heading into his senior year, but never made it to the mats – a pre-season drug test came back positive, and a new school rule disqualified him for the year.

Without wrestling, Hieron became immersed in the drug game, buying and selling marijuana, while telling his family the money he was making came from buying, restoring, and re-selling cars. He lived two lives – driving a beat-up old car at home, and a Mercedes Benz around Baldwin, where he kept an apartment and the collection of vehicular toys he’d acquired.

He reconnected with fellow Long Island native Phil Baroni, who he knew from his high school wrestling days, and helped the man now known simply as “The New York Bad Ass” prepare for some of his early fights.

In the fall of 2000, Hieron was arrested, and faced a mandatory six-year prison sentence. He pled guilty and avoided jail time, receiving five years probation instead. That life ended right then and there, and his life as a professional fighter began. He’s been training and fighting ever since.

“For me it’s a journey, and I’m still on the road of the journey, I guess,” admitted Hieron of the trials and tribulations he’s faced both inside and outside of the cage. “I’ve never had anything given to me in this game, and I had to work for what little I have gotten, but I’m in it for the long haul. If I was in it for the short sprint, I’d be done with this game for sure, but for me, this is my lifestyle.

“Anything I’m going through in my life, I can go to the gym and release. I’m not just a guy doing it for the wrong reasons, which makes everything else kind of smooth out. I’ve been through a lot, and (it’s really just) one day at a time. I feel like the stuff I go through, I get through it, and it makes me stronger. I’m still here, and I think the best is still yet to come.”

Next up for Hieron is a showdown with former Strikeforce welterweight title challenger Tyron Woodley, who steps into the UFC 156 matchup as an injury replacement for Brazilian prospect Erick Silva. As much as Hieron was ready to do battle with the young up-and-comer Silva, he’s equally ready to be the man to welcome Woodley to the UFC as well.

“I think the fight with Erick was a great matchup,” reflected the long-time Xtreme Couture fixture. “For me, I was going to go try to break him, and go off what (Jon) Fitch did with him, which was keep grinding him. I feel I’m a little more well-rounded than Fitch. I could have stood with him more, picked him apart, and grinded on him with takedown and ground-and-pound. Wherever the fight would have led, I could have grinded him out.

“With Tyron, he’s a different style – he a wrestler. He takes guys down and does a lot of laying on them. I’m prepared for that too. I think one of my best attributes is that I’m one of the hardest guys to hold down, so that’s not really an issue. First he has to get me there, and that’s hard to do. I wrestled my whole life, so wrestling is my foundation too. I think I bring more well roundedness to the game, but it’s another fight. He’s a tough guy. I’m well prepared, I’m confident, and I’m ready to fight.”

The two got into an entertaining back-and-forth on Twitter when the switch from Silva to Woodley was announced, with Hieron expressing his desire to deliver a Fight of the Night worthy performance, and asking the former University of Missouri wrestling standout to “leave the blanket @ home” in the process.

“Fans want to see it, and it doesn’t bother me,” Hieron said of the pre-fight banter, whether real or the 140-character-maximum kind. “If a guy’s talking, I can talk with the best of them too, and I can show up on fight night with the best of them. I’m for respectful fighters, but if you want to talk some smack, I’m up for that too.

“I just told Tyron straight up – let’s put on a fun fight. Don’t just try to bring a blanket in and lay on me. I train very hard; I’m ready for whatever happens in the fight, so let’s go. Let’s do it.”

Saturday night’s contest with Woodley gives Hieron a fourth chance at securing his first UFC victory. To date, the Octagon is the only place he’s yet to earn a victory.

He lost his debut with the company at UFC 48 in June 2004 to an undefeated French-Canadian fighter named Georges St-Pierre, and then battled another French-Canadian welterweight, Jonathan Goulet, in one of the most bloody fights in UFC history in October 2005, losing when the fight was stopped on the advice of the doctor 65 seconds into the third round.

After his return appearance against Ellenberger was pushed back a month following the cancellation of UFC 151, Hieron dropped a unanimous decision to “The Juggernaut” in Minnesota with scores of 29-28 across the board.

Having waited seven years to finally set foot inside the UFC cage again, coming up just short could have been a difficult disappointment to overcome. As he’s done throughout his life, however, Hieron has simply moved forward, ready to build off the performance.

“I was sour on it for a few – I thought I won the fight – but it was close, so whatever,” said Hieron of his October loss to Ellenberger. “I think I could have pushed a little harder in the third, but from my standpoint, I feel that I controlled the fight. I out-struck him on the feet; he took me down, but couldn’t control me.

“Jake fought a totally opposite fight of what I showed up on the day to fight. I take my hat off to him for that. He had a game plan. He laid back. Every fight, you see Jake comes forward, he’s aggressive, he’s pushing; that’s what I trained for, so sometimes you’ve got to switch up in a fight because you never know what’s going to happen. I’m prepared for that now.

“It was close though. I’m not going back-and-forth over this; I’m not going to hold those weights with me. I’ve dropped them, and moved forward. I’ve got a new opponent in front of me now, and I can’t wait for the night.”

With 29 learning experiences inside the cage already under his belt, and far more than that accumulated in his years before fighting, all that’s left for Hieron to do now is get that elusive first win in the UFC Saturday night in his adopted hometown of Las Vegas.

“I’m definitely bringing it,” said Hieron. “I’m back in the UFC – the biggest promotion – which is great, and I feel I match up well with anybody in the division. I’m ready to go – feeling as sharp as ever, and I’m 100 percent ready for fight night.