Ready To Put His Last Performance Behind Him, Jason Witt Is Heading Into UFC Fight Night With A Fresh Perspective
By THOMAS GERBASI, ON TWITTER @TGERBASI • Jul. 27, 2021

If you happened to catch Jason Witt driving around Kansas City in his 1999 Camaro Z28 with the T Tops off and a little Motley Crue blasting from the speakers, don’t worry, he wasn’t slacking off from training for his Saturday matchup against Bryan Barberena. Instead, he was just following orders given after a disappointing loss in his most recent bout.

“It's hard to learn a lot from a 16-second KO, I'll tell you that right now,” said Witt of his March defeat to Matthew Semelsberger. “What I did learn is you can't make mistakes at a high level. You can't make the little mistake that I made at a high level that put me out in 16 seconds. But it gave me a chance to kind of re-evaluate what I've done in my life, and I went to the (UFC) PI to run some tests.”

The tests were designed to see if the welterweight could feasibly make a move to 155 pounds after a 1-2 start in the UFC at welterweight. The answers he received really had nothing to do with weight, but with his lifestyle.

“I ran all the tests to see what they said, and they came back with, ‘You are the most stressed athlete we've seen on the entire UFC roster,’” said Witt. “So, it was a very big concern for them.”

Yeah, every fighter wants to get to the top, but not to the top of that list. 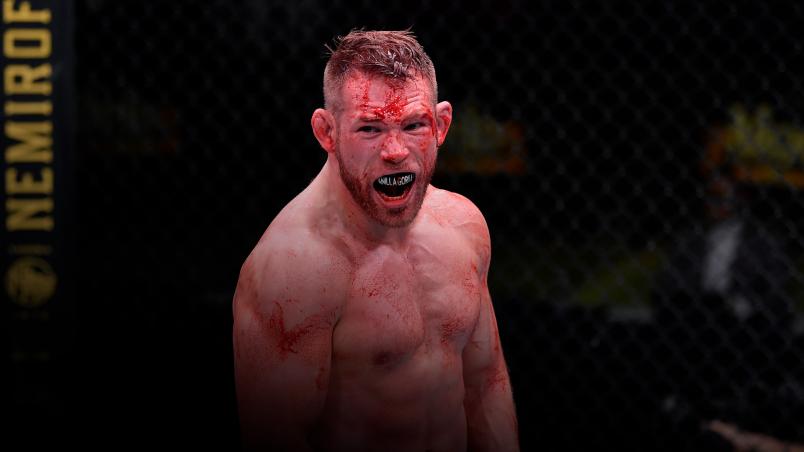 “I was like, I'm number one,” laughs Witt, owner of the FIT House KC gym as well as a pro fighters at the highest level of the sport who had a schedule to match.

“I used to wake up at 4am, work until 9, go training, go back to work and then I'd go train again,” he said. “I thought that's what entrepreneurs did. I thought you just worked until it paid off. So, I just kept running myself dry, hoping that the opportunities would come. And they did, but, at the same time, I wasn't aware of the price my body was paying for that. I wasn't happy, I was depressed, I wasn't wanting to go to training, I was kind of just going through the motions and not learning and not getting better. And the weight cut (for the last fight) showed that. When I went to cut to '70, it was a lot more difficult that time."

Preview Every Fight On UFC Fight Night: Hall vs Strickland

Needless to say, a drop to 155 was out, and that’s when Witt’s head coach at Glory MMA, James Krause, stepped in.

“He had to sit me down and he said, ‘This is what we need to do; ‘55 is not even an option, don't even look at that.’ And whatever Krause says, you listen to. This is just the way it is, and you respect the man, and so I did. And it's definitely paid a lot of dividends. I'm getting better in training, and I physically see that. I want to be at training, I want to learn, in the rounds I feel better, conditioning's better, my mentality's better.”

As for everything outside the gym, Witt says, “What I did was change everything in my life. I hired someone to run my morning classes, I'm sleeping in, an extra two to three hours a day now, and it's definitely made a huge impact on my life. I didn't learn a lot from the 16 second knockout, but I learned how to change the things outside the cage that will make me better inside it.”

The 34-year-old Witt sounds like he’s ready to take on the world, an attitude certainly helped by his new schedule and a Father’s Day gift from his father – that aforementioned Camaro.

“My dad bought it when I was 18 years old, and it was always my high school dream car because he wouldn't let me drive it because I was 18, which made sense,” laughs Witt. “He built up the engine, put a bunch of stuff on it, and this past Father's Day, he gave it to me as a Father's Day present, which doesn't make any sense because I'm supposed to give him stuff for Father's Day, but he gave it to me.”

That’s a good dad. And a heck of a nice car.

My dad took immaculate care of it,” Witt said. “Not a rust mark, not a paint scratch, and the engine compartment is immaculately clean.”

Unfortunately, with a hot summer weekend coming up, Witt and his wife won’t be able to cruise around KC, because “The Vanilla Gorilla” has a fight to attend to first, one that fans have some high expectations for. And though Witt knows what they’re thinking will transpire at the UFC APEX in Las Vegas, he’s not too interested in a Fight of the Night bonus. 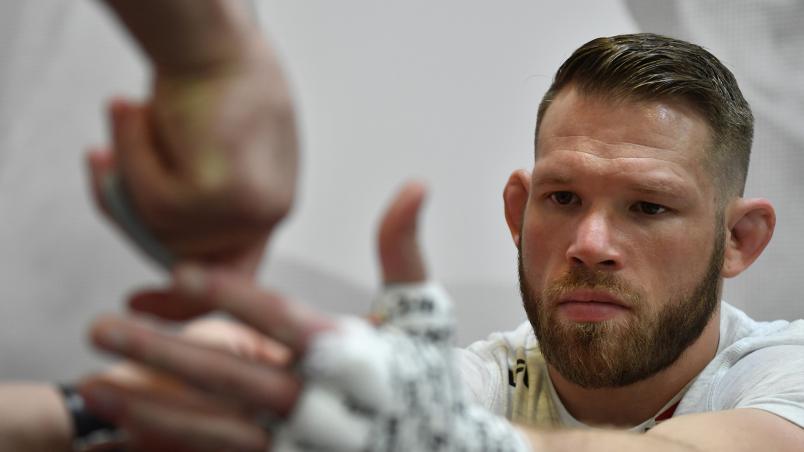 Jason Witt has his hands wrapped prior to his fight during the UFC Fight Night event at UFC APEX on March 13, 2021 in Las Vegas, Nevada. (Photo by Mike Roach/Zuffa LLC)

Not a bad plan for a fighter who knows he’s better than that 1-2 UFC start. And after coming back from losses before to shine when the pressure’s on, Witt is in familiar territory, even if shaking off the Semelsberger fight was a little tougher than most.

“I have never been in a fight that I lost because the other guy was better than me, and I know that,” said Witt, while making it clear that he’s taking nothing away from his opponent’s efforts that night. “Any fight that I've been in that I lost was because I beat myself before walking to that cage. And that previous stress all plays a factor in it. But I think the 16-second knockout is worse (than other defeats). It was embarrassing. Honestly, I was depressed afterwards. I knew I had a fight on my contract, but I was like, 'I don't know if this is what I want to do.' But I strapped my boots up and got back on there and kept grinding and made those changes I needed to make. I've never gotten into a three-round fight with a guy who just beat my ass the whole fight. I imagine it will come, but it ain't gonna be this time.”

This time, Witt expects to show up as the fighter he knows he can be, and if he does that, he’ll know Barberena saw his best. After that, well, stay tuned.

“Win this fight and then we'll worry about what to do next, but this is the fight we're at and this is what I'm gonna deal with.”