“The one thing I told myself was that I fight best when I’m enjoying myself, I’m relaxed, and I’m having a good time." - Jason MacDonald 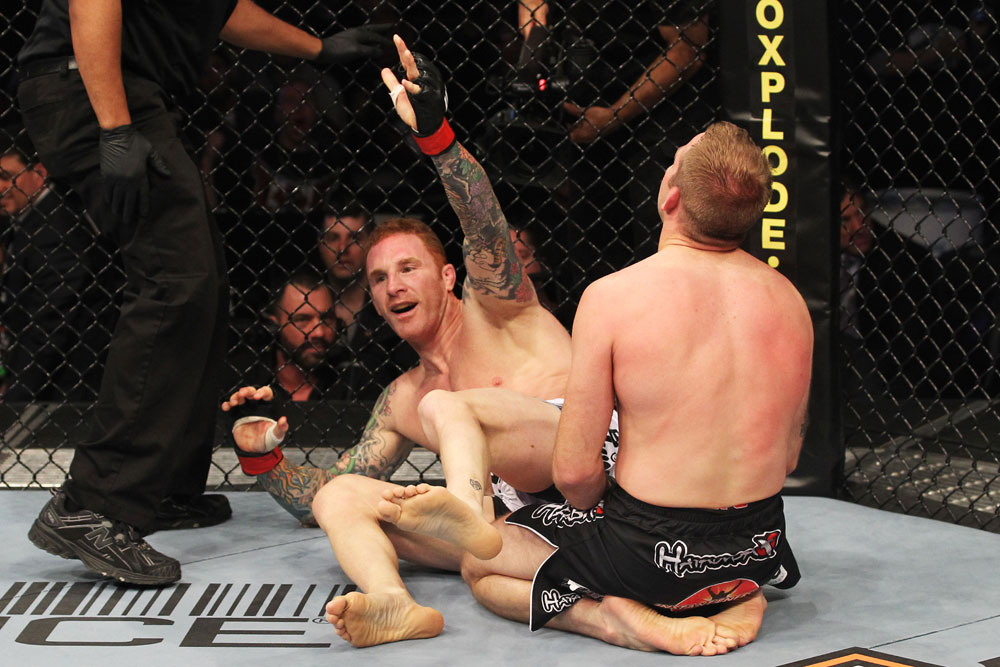 Turn the Page. For fans of Bob Seger and Metallica, it’s just a great song from the archives. For Jason MacDonald, it became a representation of the life he was leading as an up and coming mixed martial arts fighter.

It was a road filled with ups and downs and trying to juggle fighting with his family life and his job as a corrections officer at Bowden Institution in Alberta. It’s the kind of journey that can break those not strong enough mentally and physically to deal with it, but MacDonald, a pro since 1999, soldiered on, even while competing in venues far removed from the big shows he hoped to one day fight in.

“My first couple fights were in gyms where they took the sparring ring and set up some chairs around it, and that was back in the early days when the sport really was evolving and searching for an identity,” he said, but in October of 2006, seven years into his career, he got his shot as the foil for The Ultimate Fighter season three finalist Ed Herman.

MacDonald submitted Herman at 2:43 of the first round. Two months later he did the same thing to another TUF alum, Chris Leben, and he was off and running. All told, MacDonald fought ten times in the UFC Octagon from 2006 to 2009, but after losing three of four bouts against Demian Maia, Wilson Gouveia, and Nate Quarry, he was released from the organization.

He was 33 years old and forced to start over. He lost his first post-UFC bout to Travis Lutter six months after the Quarry fight, but then he ran off three wins on the Canadian circuit against quality opposition, and he was brought back to the Octagon to face prospect John Salter at UFC 113 in May of 2010.

Yet 2:42 into the bout, a freak fall by MacDonald caused him to break his left fibula and tibia and tear ligaments as well. It was a loss on his record, his 14th, but more devastating was that he might have fought his last fight. The timing was horrible as well, as January of 2011 was his deadline for returning back to his former day job after a five year leave of absence.

“I was disappointed that I had fought so hard to get back to the UFC and then to come away with a badly injured ankle and a loss on my record, I was extremely disappointed,” said MacDonald. “When you’re not healthy physically, you’ve got a lot of time to sit around and do some soul searching, and I was certainly asking myself that question – at 35 years of age, do I get healthy and put in the work and take another run at this thing, or do I take a step back, say ‘hey, it’s been a good run’ and call it a wrap?”

The questions engulfed his days, but slowly, good news began to creep back into his life.

First, if he decided to return to active duty as a fighter, he would get another shot in the UFC.

“That was huge,” he said. “Obviously after suffering the injury, if the UFC chose to let me go, it would have been a lot harder for me to get motivated to return to fighting and start that long journey back to the UFC. At the end of the day, I’m a professional fighter, and I don’t think anybody’s saying ‘okay, I’m happy just fighting in the minor leagues.’ Everybody’s aspiring to be at the top of the game and to be in the UFC, and I’m no different.”

Next, his warden extended his leave of absence by a year, giving MacDonald more time to pursue his fighting dreams. And finally, he began to become Jason MacDonald again, physically and mentally.

“I started to get off the crutches and eventually out of the cast, and I started walking on my own, running and then back to working out. And slowly I got back into mixed martial arts training, and you start to get healthier mentally as well, and start to get your confidence back and start believing in yourself again. Then you start to watch fights and get excited and get those butterflies in your stomach, and those are the things that told me that I was still very much a fighter and very much a competitor and that the fire was still burning inside me.”

He was back. But there was a catch.

“I put a stipulation in there that if returning to fighting meant that every morning I had to wake up and really struggle to get moving and really deal with a lot of pain and discomfort, I wasn’t willing to make that sacrifice,” said MacDonald, a married father of four. “I wasn’t going to handicap the rest of my life just to chase the dreams of what I wanted to do in fighting.”

A December 2010 bout was scrapped, but when it was announced that the UFC was going to Toronto to put on an event at Rogers Centre on April 30th, MacDonald was on the card, facing fellow veteran Ryan Jensen.

And “Turn the Page” led him into the Octagon for the biggest fight of his career.

“It brought back a lot of good memories and a lot of hard-fought victories of some of my first UFC fights,” said MacDonald. “I wanted to get back to what was working and what was familiar.”

But who could prepare for more than 55,000 fans roaring and cheering for you? Even a couple days after the event, MacDonald still struggles to find words to describe it.

“It all happened so fast,” he said. “I don’t know if I can really put words to the atmosphere that was there Saturday night. I never in a million years thought that I ever would be fighting or that mixed martial arts in general would be on that type of stage. Even going into the Bell Centre in Montreal, where the three biggest fights were prior to this, there seems to be an end to the people. (Laughs) At some point you can look and see where the people end. But on Saturday night, it was a never ending sea of people. Everywhere you looked, as high as you could look and in every direction you looked, there were thousands and thousands of people. And there were big screens, taller than some of the arenas we’ve fought in (Laughs), and it really was amazing.”

Once MacDonald stepped into the Octagon though, nothing mattered but Jensen, and in a stirring return to form, he submitted his opponent with a triangle choke in just 97 seconds.

“The one thing I told myself was that I fight best when I’m enjoying myself, I’m relaxed, and I’m having a good time. I said regardless of what happens out there tonight, I’m going to enjoy this moment. So from the moment they started my music to walk out, I was enjoying myself. I had a smile on my face and I was relaxed. Then I got to the Octagon, and when that door closes and Bruce Buffer takes over, it really is business as usual. I felt comfortable, and I knew that I was better than Ryan Jensen. I knew that I had faced better competition than Ryan Jensen, and if I stayed focused and fought my fight, I would come away with a good victory. Of course you can’t predict it happening that fast, but it went as planned.”

Now MacDonald can literally turn the page and get on with the next chapter of his fighting story.

“At this point in my career, I’m taking it fight by fight,” he said. “I’m realistic with where I’m at in my career and I’m not a title contender right now, but all of a sudden after this fight, I can kinda switch gears from fighting for my job and piece together some solid wins and try to make myself relevant again in the division.”