Jason High: The Kansas City Bandit is Back for Round Two

"I’m a better fighter, a little bit more mature, and everything’s coming together – it’s like the perfect storm." - Jason High 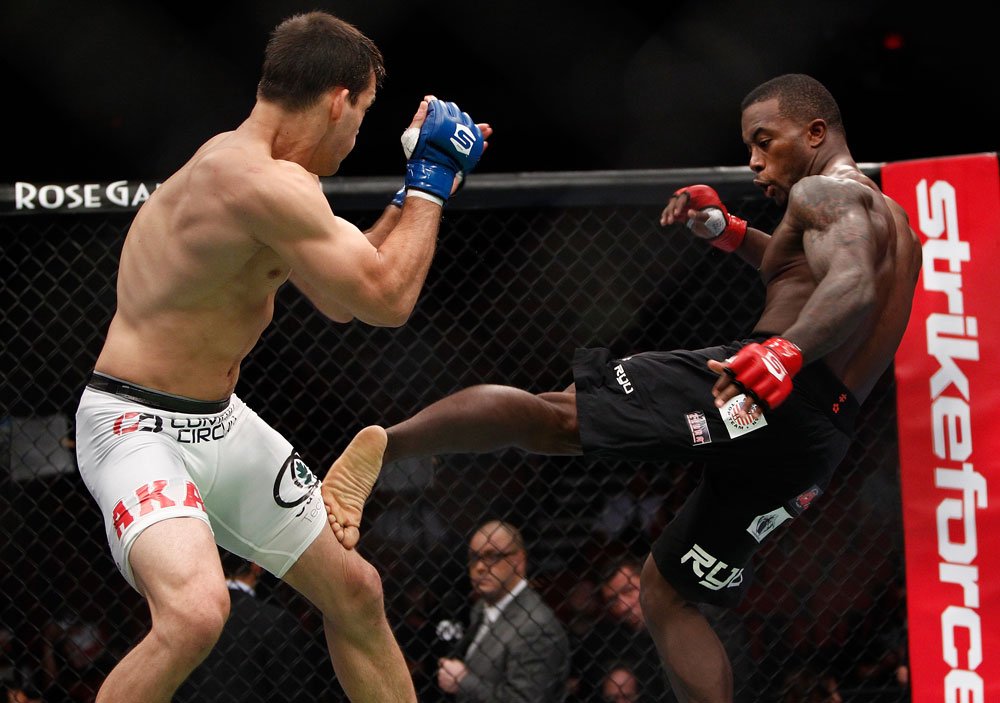 Since his decision win over Todd Moore in September of 2011, Jason High has fought a grand total of 26 seconds. In one way, it’s good to go home early, as he did with his sub-30 second submission of Nate Moore (no relation to Todd) last July, but in another, well, no 31-year-old fighter wants to be on the sidelines for that long.

“It definitely sucks being on the shelf like that, especially at this point in my career, but it’s also something I try not to think about,” said High. “I know my manager’s working hard, and I just tried to stay in the gym and stay busy. Last year I did the jiu-jitsu Worlds tournament and a couple other small ones, and I train pretty much every day, so I haven’t done any sitting around. I’m still training and still working on getting better. And that’s the key. I’m 31, and I’m not old, but it’s much easier to stay in shape than it is to sit around and get back into shape.”

So when he got signed to the UFC earlier this year after Strikeforce closed its doors, High was ready, willing, and able to jump in and join his comrades in the Octagon. That opportunity didn’t present itself until he was offered a fight with Ildemar Alcantara on this Saturday’s UFC on FUEL TV 10 card in Fortaleza, Brazil. Even that wasn’t without a hitch, but this time it was a good hitch, as an injury to John Hathaway forced him out of his main card bout with Erick Silva and opened up a spot for High to step in. He didn’t hesitate to say yes.

“It’s a better opportunity, it’s the main card, and there’s really no down side for me,” said the Kansas City welterweight, no stranger to out of town trips having already competed in Japan, Canada, and Guatemala. This is the UFC though, but High has that aspect covered as well, having competed in the Octagon back in 2010 against Charlie Brenneman. High lost that fight via unanimous decision and was cut after the bout, a decision he had no issue with.

“I wasn’t really surprised when I got that call a few years ago because it was my second loss in a row,” said High, who was coming off a first round knockout loss to Marius Zaromskis in Japan’s Dream promotion when he made his UFC debut. “But I really don’t think about it too much. Maybe I wasn’t ready for it. Optimally I would go get a couple wins after the Dream Grand Prix and then come in, but the opportunity came and I took it. I don’t know if I was ready or not, but either way I lost the fight.”

That card in Charlotte, North Carolina was best remembered for  Kenny Florian spoiling the UFC debut of Takanori Gomi and the lights going out in the Bojangles Coliseum seconds before the Roy Nelson vs. Stefan Struve bout, but few recall the Brenneman-High bout that opened the event, leading several people to congratulate High these days on his upcoming UFC debut.

“At this point I just stopped correcting people,” High laughs. “It doesn’t really matter. It was kind of an obscure fight and a lot of people don’t know about it, but it’s no big deal.”

What is a big deal is the run High has gone on since the Brenneman defeat. 7-0 with three finishes, “The Kansas City Bandit” has claimed Jordan Mein, Hayato “Mach” Sakurai, and Quinn Mulhern as victims along with the aforementioned Moores, and you can safely say that this is not the same fighter that battled Brenneman over three years ago.

Add in the main card slot against one of Brazil’s top up and comers, and that storm may be rolling into Fortaleza this weekend, especially with former University of Nebraska wrestler High seeing a blueprint of sorts to beat Silva in Jon Fitch’s win over the Brazilian last October.

“I’m not gonna go in there and try to copy Jon Fitch, but it’s definitely a rough draft for that fight and I’ll add my little two cents on it,” said High, a fighter who’s come a long way from the days when he took up MMA just as something to do after his shifts as an EMT.

“I started out just for fun, but as the years went by I started to see myself in those places, in big arenas, winning big fights, and stuff like that,” he said. “When I started out, it was just a hobby. I was working and I had never been a great 9 to 5 type person, and I just needed something else to do. So this is what I chose.”

It was a good choice.