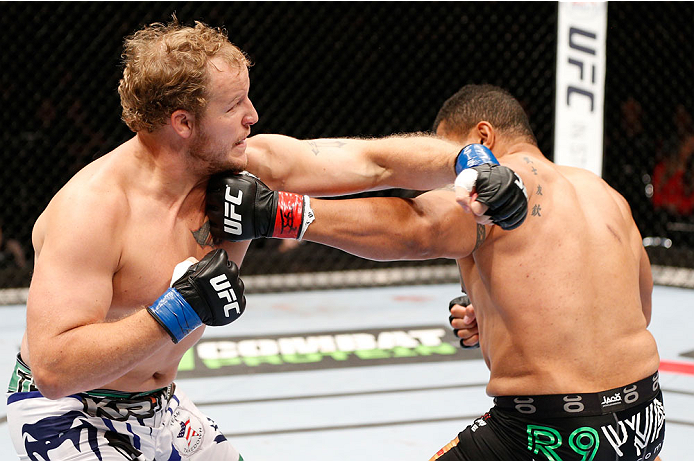 The wrestler test. It’s a kind of an “inside baseball” idea that any UFC fighter who is winning and climbing the ranks of their division must at some point tangle with and defeat a high-level wrestler inside the Octagon to prove their merit.

There’s a great history of top wrestlers achieving a lot of success in the UFC because of their gritty toughness, never-ending cardio, grinding pressure and preternatural ability of breaking their opponent’s spirit on the mat as well as in the Octagon.

So, who is the “wrestler test” for UFC heavyweight Jared Rosholt, who has the best wrestling credentials in the division?

The three-time NCAA Division I All-American wrestler and the owner of the record for most heavyweight wins in Oklahoma State University history figured out the answer by returning to his alma mater to battle with the new breed of mat monsters.

“Our coaches love to come on these trips to watch us wrestle because they’re in awe of how hard these guys can go,” Rosholt said about the current OSU wrestlers. “These guys are really happy we’re there working with them, but at the same time they are trying to be the best in the country at what they do. They don’t really care what you’ve done. This guy is thinking about how he’s trying to be the best and he wants to take my head off. Or Johny [Hendricks] comes in, he’s the UFC [welterweight] champ and a two-time [NCAA Division I] National champ and they don’t care about that because they’re like, ‘I want to be the champ.’ They’re out there trying to kill you. They’re not intimidated at all. They’re trying to make a statement. They’re trying to be tougher than you were. These guys are a different breed. They’re just tough people.”

It has been four and a half years since “The Big Show” competed for the Cowboys and, clearly, Rosholt hasn’t forgotten his roots nor has his Team Takedown teammate UFC welterweight champion Johny Hendricks. The two of them are busy preparing for their upcoming Octagon appearances by battling the fiery 21-year-olds who aim to outdo their previous college careers, guys like two-time NCAA Division I National champion Chris Perry, who is now coaching at OSU, and junior Alex Dieringer, who won his first NCAA Division I National championship last season.

For a heavy like Rosholt, he needs a big ‘un to push him, and that’s NCAA Division I All-American Austin Marsden. “He’s a big guy, he’s explosive, he’s strong,” Rosholt, who flew the 285-pound junior to Texas at the end of last wrestling season to help train him for his most recent UFC win, said. “We knew Soa [Palelei] was going to try and take me down because he’s so dominant from there. If I could stop Austin’s shots and take him down, I feel comfortable going against anyone else in the world.”

And stop shots is exactly what Rosholt did - five of them to be exact.

On the other side of the planet in New Zealand, Rosholt kept his Octagon winning streak alive by earning his third straight unanimous decision. In June, he butted heads with “The Hulk,” Soa Palelei, who had scored 11 consecutive KO finishes, including three in the UFC. Palelei had a size advantage on Rosholt, but he couldn’t out-muscle The Big Show and get him to the ground. It was a calculated performance from Rosholt keeping Palelei away from where he’s most dangerous while being more active and controlling the fight.

“We went in there with a good game plan,” Rosholt said. “I have good coaches and we knew what we were getting into. I couldn’t go out there just winging big punches and put myself in position to get taken down. The plan was to not get taken down by him, put him against the cage, use punches off of that, to grind him out and to test his conditioning. We had to be careful with Soa. That’s not exactly how I would like to fight. I think in my next fight I am going to be open to taking more risks because I’m not worried about a takedown and getting pounded out like with Soa. I think it just depends on the fight.”

Up next, Rosholt will aim to entertain the fighting faithful in the Lone Star State at UFC Fight Night: Edgar vs. Swanson as he takes on “The Boa Constrictor,” Alexey Oliynyk. Securing his 38th tap out in his UFC debut, the submission magician is on a 10 fight win including the first round scarf hold headlock of Anthony Hamilton in June.

With wins on his 49-9-1 pro record dating back to 1997, Oliynyk is a very real veteran who boasts a near endless bag of submissions that are rarely seen in MMA like the scarf hold or ezekiel choke. The major problem for Oliynyk is how will he get Rosholt down to use those fancy holds?

“I think his strengths play into my strengths and I think his weaknesses do too,” Rosholt explains. “Him trying to take me down? I feel real comfortable there. It’s going to be real hard for him to do that. Soa had great takedowns and he’s a big, big guy and he couldn’t take me down. I don’t really want to go to the ground with this guy just because of his submissions. I’m comfortable with it, but I think it will be a big advantage for me to stay on my feet. I think I have really hit a stride with my striking, so I think I’m really going to try and put this guy away on my feet. That’s always fun, watching heavyweights throw big punches.”

Besides the work in the OSU wrestling room, Rosholt is putting in a lot of work at Velociti Fitness with Team Takedown. Rosholt uses the same core group of coaches that steered Hendricks toward his UFC title, like Marc Laimon, Adrian Ramirez, Steven Wright, Tony Cabello and former US Olympic gold and silver medalist in freestyle wrestling Kenny Monday.

This Saturday in Austin, two heavyweights’ win streaks will collide as Rosholt meets Oliynyk inside the Octagon. “Priority number one for me is to win, but I would like to get a finish,” Rosholt said, ready to not just pass his next test, but to ace it with a big KO. “I’m coming into my own with striking. I have had finishes, but I haven’t had one on the biggest stage and that’s where I want to get them.”