Jared Rosholt: Cool with Being the Bad Guy

"There’s nothing like going up to the University of Iowa and having 10,000 fans boo you and cuss at you while you’re in there." - Jared Rosholt 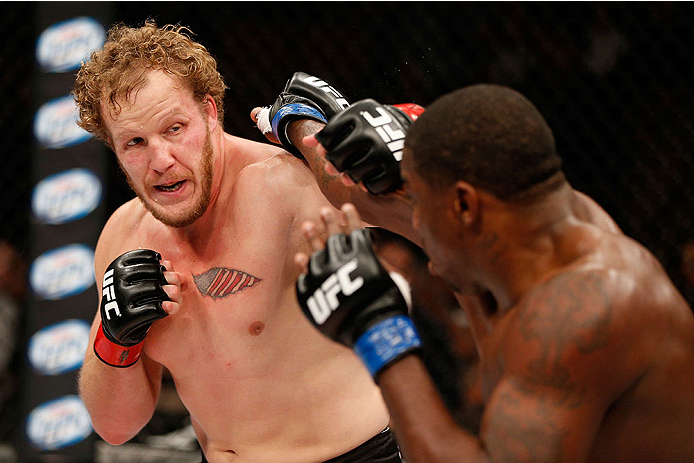 Two UFC fights, two wins, and then a co-main event slot in bout three? That’s not a bad start to Jared Rosholt’s UFC career, but the heavyweight prospect has no problem being the guy across the Octagon from Australia’s Soa Palelei this Saturday in New Zealand.

“With Palelei being from Australia and him being an attraction over that way, I understand why we’re co-main event,” said Rosholt. “I planned on working my way up to that level anyway, so it’s a little sooner than I thought but I’m perfectly fine with that. I’m really excited about it.”

The flight from Texas to Auckland? Well, he’s not as excited, but to get ready for the trip and the fight, he made the trip Down Under on June 17, 11 days before fight night. It’s a wise move indeed for the 27-year-old from Arlington.

“With that long of a flight, we just wanted to make sure that we got out there and got acclimated and that we were taking down the food all right without getting sick or something like that,” he said. “Whatever advantage we can get, let’s take it.”

That goes for the fight as well, and with Palelei’s reputation for taking care of business early (none of his 21 wins have gone the distance, with 16 of them ending in the first round), Rosholt knows that the longer the bout goes, the more in his favor the momentum swings.

“You’ve got to look at both sides,” he said. “With him never going the distance, it shows that he’s dangerous. He gets on top of guys and knocks them out and he’s a big ol’ guy. On the other hand, he hasn’t gone the distance and I have and I know that I can. He doesn’t know if he can, so it’s an advantage and I definitely think if it goes out of the first round it’s going to weigh heavily in my favor. Of course I’m really going to go hard in the first round too, but I’m definitely going to emphasize going hard in the second and third.”

Both of Rosholt’s UFC wins have gone 15 minutes, as he’s taken unanimous decisions over Walt Harris and Daniel Omielanczuk since debuting in November of last year. But looking deeper at both Rosholt’s background and Palelei’s record, the best wrestler “The Hulk” has faced – former two-time Olympian Daniel Cormier – stopped him in the first round back in 2010. It’s a bout “The Big Show” has watched very closely.

“I know Cormier personally and trained with him, and I remember watching that fight,” said Rosholt, the winningest heavyweight wrestler in Oklahoma State University history. “I didn’t know who Palelei was at the time, but I thought he was going to be pretty tough. Cormier gave me a pretty good blueprint for what I need to do, and I’m not an overly tall guy, but Cormier’s shorter than me. And my wrestling’s pretty good as far as credential-wise; it’s probably the best in the heavyweight division in the UFC, but I can’t really compare myself to Cormier; he’s an elite Olympic wrestler. But I know my wrestling is good.”

Rosholt is also confident that he has what it takes to beat Palelei in what can clearly be described as his backyard.

“I have no intention of losing,” he said. “This is a very winnable fight, and it’s probably the most confident I’ve been going into a fight out of my last two. I really feel very comfortable going into this one and very confident.”

Okay, but what about the crowd? That’s a stupid question to ask Rosholt, because if anything, as an OSU wrestler, he’s heard his share of boos over the years.

“It never really bothered me to be the guy that nobody liked or wanted me in the arena,” he said with a laugh. “That kind of put a little more on the table, a little more value on getting a win because you’re trying to prove all these people wrong, you’re trying to win, and you’re trying to do it in front of this guy’s fans. You want to win whenever it’s the toughest, and it kind of shows who you are, what you do, and how much you believe in yourself.”

He pauses, as if to remember those days in college while imagining what it will be like Saturday in Auckland’s Vector Arena.

“There’s nothing like going up to the University of Iowa and having 10,000 fans boo you and cuss at you while you’re in there,” he said. “There’s nothing better than that. And even though they hated us whenever we were there, that was the most fun and electric arena I’ve ever been in, and we just got booed the whole time. I loved every bit of it.”

Yeah, being the “bad guy” on Saturday won’t bother him at all.