"Some guys like playing video games, some like hiking or playing basketball; I love fighting." - Jared Hamman 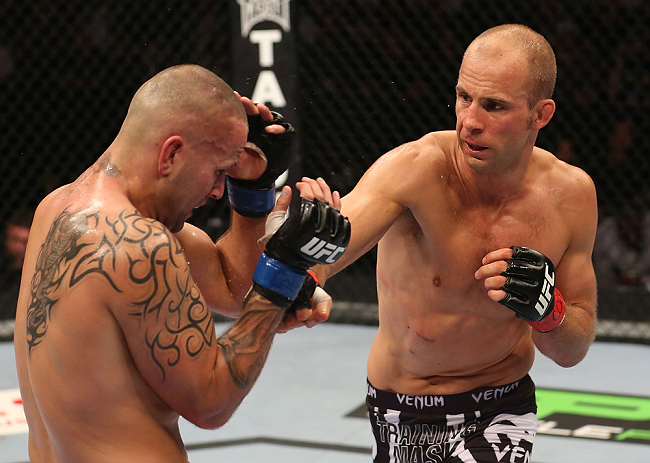 “If you were out on the field and you got a sprained elbow, or a lineman ran into your shin with his helmet or whatever, are you gonna come out of the game?”

The response was the expected one: absolutely not.

“So what is it gonna take to get you out of the game?” Hamman pressed.

Again, the players responded in various ways that it would take a lot more than a ding or two. That was the answer Hamman was looking for.

“I know exactly why, because you love the game,” he said. “You’re gonna have to have a coach drag you off of that field.”

It wasn’t just talk from the former football player turned mixed martial artist. That was the way he played football, and it’s the way he fights. His track record in the UFC proves it, no more explicitly than in his most recent bout against Michael Kuiper in August of 2012, when he tore his hamstring and still fought on until being stopped in the second round.

“You would never stop if you twisted your ankle in football, and in my mind that’s how it was,” he said. “I still have a left hand, a right hand, and a left leg. All right, let’s do this.”

That’s walking the walk, but there would be no walking or fighting in Hamman’s immediate future after the bout, and after an injury like that you had to wonder if the 31-year-old would ever fight again. A visit to a doctor who worked with the NFL’s Denver Broncos removed such doubts.

“Had they said ‘hey, listen man, you should probably chill because this will never be the same,’ I probably would have said ‘all right, that’s probably it then,’” said Hamman. “But the doctor was like, ‘no, we got this, this is cool. I see this all the time.’ (Laughs) He made it sound like it was nothing, and to be honest, that’s what gave me the confidence.”

The surgery was a success, but the rehab for the injury was a long and arduous one. Through it all though, Hamman never wavered from his desire to fight again.

“I love doing it,” he said. “If I wasn’t fighting I’d probably be doing something else that would be crazy like rock climbing. (Laughs) Some guys like playing video games, some like hiking or playing basketball; I love fighting. So the fact that they were even able to rehab to the way it is now blows my mind. It’s unbelievable.”

On Saturday, Hamman makes his return against Magnus Cedenblad in the opening bout of the UFC 164 card in Milwaukee. For the two-time Fight of the Night winner, it’s a chance to reintroduce himself and remind people just how tough this California native is. You could say that’s something you’re born with, but Hamman isn’t so sure.

“Being a former football coach, that’s why we have Hell Week,” he said. “To see whether you got it or you don’t. Do you really want to play this game, do you really want to do whatever it takes to do this? I don’t know if I was born like that or my coaches did a great job of mentoring me. But when I started this, it wasn’t necessarily to be the best fighter in the world; I wanted to test myself and go against the hardest competition to see what I’m made of.”

We already know what he’s made of. Now it’s time to test it against a division that has plenty of willing competitors in it.

“There are so many fighters at 185 now,” he said. “It used to be that light heavyweight was the big division, then it was 155, and at least from a fan’s perspective, they would say there were no guys coming up in the 185 division. But I think it’s gonna start building up more and more and I think it’s cool for our division. It’s exciting.”