Welterweight Arrives In Vegas Confident In The Game He Has Put Together
By E. Spencer Kyte, on Twitter @SpencerKyte • Oct. 8, 2021

Jared Gooden looked like a different person as he walked to the Octagon to face Niklas Stolze at the end of July.

Physically he was the same six-foot tall welterweight with a long reach and a build that screams power and explosiveness, but unlike the first two times he made the trek from the back towards the UFC cage, he wasn’t scowling; he was smiling.

“My friend calls it my ‘gangster face,’ where when they’re announcing me and before the fight starts, I look angry the whole time,” the talented welterweight said of the intense demeanor he projected ahead of bouts with Alan Jouban and Abubakar Nurmagomedov, each of which ended in defeat. “My last fight with Stolze, I was just smiling the whole time because I was happy to be there. I was living in the moment like I am now.”

The more relaxed and amiable Gooden stepped into the Octagon on July 31 and knocked out Stolze in 68 seconds to secure his first UFC victory, and while correlation is not causation, the man known as “NiteTrain” is bringing that same “just have fun” approach to his co-main event assignment opposite Randy Brown on Saturday.

“My first two fights in the UFC, I was learning a new style, and people could see that I wasn’t fighting like myself out there yet,” continued Gooden, who carries an 18-6 record with 14 finishes into his bout with Brown this weekend in Las Vegas. “I was trying to mix this new style in with my old style, and it wasn’t blending just yet.

“After my last loss to Nurmagomedov, me and my coach went back to the gym and made sure we made everything blend. Now I’m going out there and having fun again — smiling, geeking the whole time, and just putting everything together.”

Gooden is far from the first athlete that reached the UFC level believing they were ready to jump straight into the deepest part of their respective division only to have trouble staying above water, and he certainly won’t be the last.

But what he did between his second and third appearances — and what is key for all those looking to remain afloat in the rough seas of the top promotion in the sport — is accept those defeats, identify what went wrong, and address those issues, turning disappointing efforts into agents of change that ultimately produce better results.

“One of my favorite songs is ‘Dream On’ by Aerosmith, where he says, ‘You have to lose to know how to win,’” offered Gooden. “Nobody wants to lose, but it happens so that you can bring your best self out.

And now that he’s registered that first victory and done so in spectacular fashion, the engaging finisher is looking to build on that impressive performance against Stolze, but without putting too much pressure on himself as he readies for the biggest assignment of his mixed martial arts career.

“Now that I’ve gone out there and shown (what I’m capable of inside the cage), my coach wants and expects more of me — he wants more power; he wants a faster me; better cardio,” began the 27-year-old, who trains under Kelly Davis in Atlanta, Georgia. “If you’ve ever seen Remember the Titans, Denzel Washington tells them when they’re training on the football field, ‘I demand perfection,’ and that’s what my coach demands of me.

“He demands perfection and I’m going to give it to him.

“It’s great opportunity — I’m thrilled beyond words — I just want to go out there and take advantage of this opportunity,” he said of facing off with Brown, a six-year UFC vet coming off a first-round submission win over Alex Oliveira in April. “I’m not trying to put too much stress on myself.” 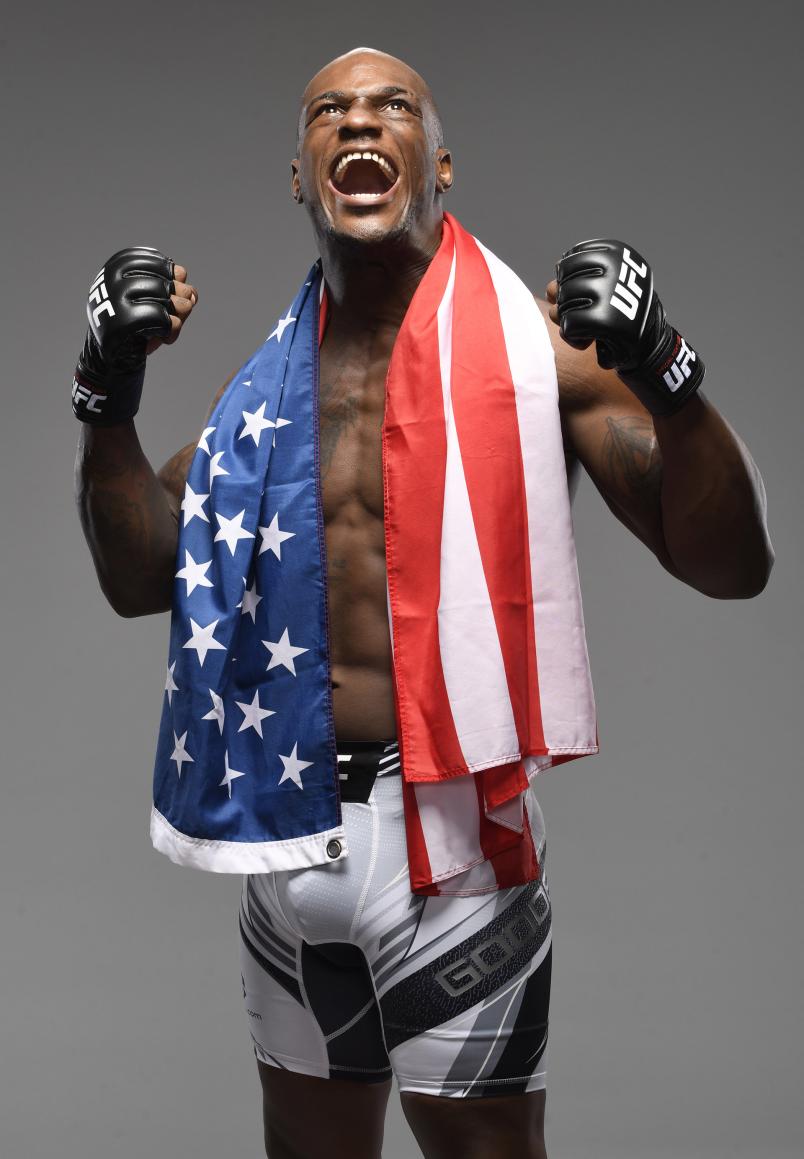 Jared Gooden poses for a portrait after his victory during the UFC Fight Night event at UFC APEX on July 31, 2021 in Las Vegas, Nevada. (Photo by Mike Roach/Zuffa LLC)

Rather than stressing, Gooden is trying to heed the advice and direction of his main training partner and be the kind of fighter that fans make a point of tuning in to see compete.

“My boy “Floe” said, ‘Stop thinking about, ‘Oh, I have this long to fight’ or this, this, and this; just live in the moment,’” began Gooden, sharing the insights his teammate bestowed upon him prior to the fight with Stolze. “He said, ‘Be there. Be happy. Go out there and be thrilled to be out there.’ That’s what happened last time, that’s what is going to happen this Saturday, and I just can’t wait to go out there and perform.

“I tell people all the time that this has been my dream for the last 15 years — not just to be in the UFC, but to get a big win in the UFC; to let everybody know I’m here. To get that in July was awesome, and I can’t wait until this Saturday to do it again.

“It doesn’t have to be the same way — it could be a submission or any kind of finish — but I want to go out there, finish, and show the world what ‘NiteTrain’ can do,” he added. “I’m exciting and that’s how I want people to see me, too.

“I want the fans to stop whatever they’re doing when they know that I’m fighting. I want them to want to sit down and watch me.”

Along with making his fight appointment viewing for fans, Gooden believes his exciting approach is a recipe for success inside the cage, continuing with Brown this weekend, and then on to bigger, more established opponents until he’s ascended to the top of the welterweight mountain.

“I believe a victory over Randy Brown launches me forward,” he said quickly when asked about the potential impact of this weekend’s co-main event. “I already have four guys in the Top 15 that I’m looking at that I want next, and I believe winning this fight on Saturday in spectacular fashion puts me in line for those fights.

The UFC Month In Review | September 2021

“I want to fight two more times this year, and if I can get to those guys, knock them out, and climb my way to the championship, that’d be great.

All aboard the “NiteTrain!” Choo! Choo!