Jared Cannonier Is Unfazed By The Moment

Whatever your belief is on momentum and its level of impact on an athlete’s performance fight to fight, momentum is definitely a factor when it comes to earning a title shot. Jared Cannonier conjured up plenty of steam when he entered the middleweight division, earning three consecutive finishes from November 2018 to September 2019. He was rumored to face Robert Whittaker a few months later, but that matchup fizzled out as Whittaker took some time to rejuvenate himself. A matchup with Darren Till also fell apart when Cannonier suffered a torn pectoral muscle.

So, 13 months after he catapulted himself up the middleweight division and caught the attention of middleweight champion Israel Adesanya, Cannonier finally faced Whittaker on UFC Fight Island. He fought hard, but ultimately came up short, and he also sustained a broken arm for his troubles. Another eight months passed before he fought, but this time, he picked up a main event victory in the form of a unanimous decision nod over Kelvin Gastelum.

Beyond getting back in the winner’s circle, Cannonier was particularly happy about a clean bill of health following his win over Gastelum.

“Not being injured after fights is really helpful for me,” Cannonier told UFC.com. “Those layoffs were not fun. They were not advantageous. After this last fight, no injuries. I was able to get right back to the grindstone, right back to sharpening my tools and becoming a better fighter, marching closer to that title shot.”

Cannonier once again appears to be on the precipice of a title shot. With his division’s belt on the line at UFC 271, Cannonier and Derek Brunson are seemingly competing for “next.”

Brunson carries plenty of momentum of his own heading into this fight. Although his record features losses to Whittaker and Adesanya, he hasn’t tasted defeat since facing the current champion in November 2019. His improvements after moving to Sanford MMA are well-documented. Along the way, Brunson has shown more patience and maturity that makes the most of his well-known explosiveness. Even while he has impressed Cannonier, “Tha Killa Gorilla” knows facing him is a whole different kind of challenge.

“It’s going to be way harder (for him),” Cannonier said. “I got way better wrestling defense, I have a way better ground game than I’ve seen out of his opponents in their fights, so learning from their mistakes is one thing I definitely did. I’m not going to be sitting around, waiting, letting them hold, letting him do all of his stuff. I don’t think he’s that dynamic of a wrestler. He does go to the right place at the right time, and I’m sure he’s super strong in those positions. I’m strong, too. I’m stronger than I was before, and I plan on being stronger that night.”

That’s less of a brag from Cannoniner and more just him stating facts. Cannonier’s 84.6 percent takedown defense is the highest in the division’s history.

That said, Cannonier doesn’t expect to just spend his time on the defensive. He made it this far because of his marauding, powerful striking, as well. He showed he has five-round cardio against Kelvin Gastelum, but Cannonier doesn’t plan on making a habit of that showcase. Instead, the Dallas native hopes to show out for his home state for the first time in his professional career. 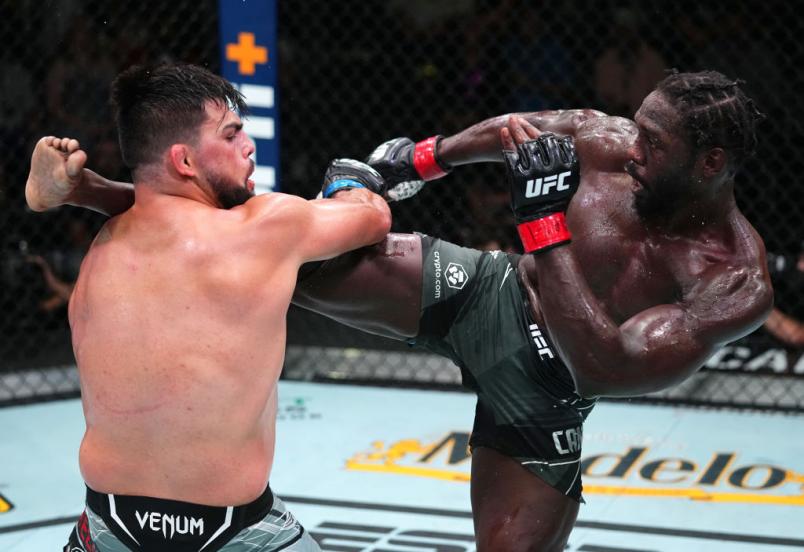 “I want to have a different approach, a more direct approach,” Cannonier said. “I want to finish the fight. I don’t want to fight five rounds again. It was fine. I was fine. I felt good in that fight, but I prefer to finish a fight early. If he wants to get in my face, I’m going to bust him in his. He’s going to have to be smart, so with that in mind, he may come in there a little desperate, and that will open him up, for sure, but I’m not going to put too much stock into it.”

A surprise element to this fight is Brunson’s announcement that he plans to fight twice more and call it a career. It’s a curious declaration from a fighter in the best form of his career, but Brunson feels comfortable with that timetable. 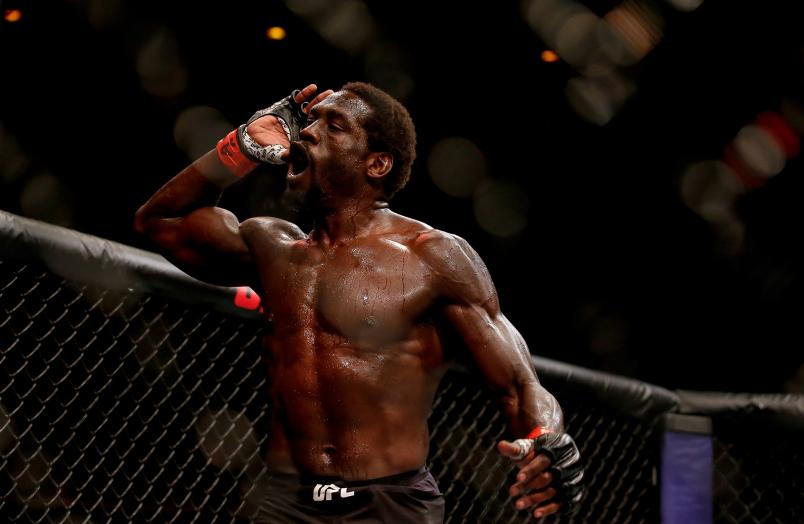 Jared Cannonier of USA celebrates after his victory over Anderson Silva of Brazil in their middleweight bout during the UFC 237 event at Jeunesse Arena on May 11, 2019 in Rio de Janeiro, Brazil. (Photo by Alexandre Schneider/Getty Images)

In Cannonier’s eyes, he doesn’t put much stock in how that may have impacted Brunson’s preparation or his fight night headspace. He knows the dangerous fighter he has in front of him, but he also has a great self-awareness of his own talents and abilities. The title shot is once again in his grasp, and all it takes is one shot to get the big shot. Momentum be damned; the door is there to be kicked down on February 12.

“I’m pretty much unfazed by the position that I’m in,” Cannonier said. “My goal is to get the title so I can get to all the money associated with it and secure my future. The future of myself, my family, and that’s it. All the attention – I don’t like fame. I don’t like people looking at me, smiling at me, wanting to suck all my energy, all that stuff. I’d rather be rich than famous, and that’s my goal.”