Jared Cannonier Is Ready To Kick In The Door

Jared Cannonier Sees His Main Event Bout With Kelvin Gastelum As The Perfect Opportunity To Break Into The Middleweight Elite.
By Zac Pacleb, on Twitter @ZacPacleb • Aug. 19, 2021

Jared Cannonier stepped into the Octagon for a main event bout against Robert Whittaker with a title shot within reach. Middleweight king Israel Adesanya said as much before the fight, and so, clearly, the stakes were high for “Tha Killa Gorilla” in October 2020.

Unfortunately, his chances were almost immediately shaken up when Cannonier broke his arm while blocking a Whittaker head kick. He then spent the majority of the fight a little behind the former champion, but in the third round, he found a window to finish the fight and nearly got the job done. Alas, Cannonier eventually suffered his first loss as a middleweight. That said, there are worse losses than going three full rounds with a former champion, and Cannonier took away a handful of lessons from the experience.

“I don’t really want to give away my secrets,” Cannonier told UFC.com. “I have learned a few things, a lot of things from that fight. One would be being prepared to fight probably in a handicapped state, if you will. Injuries happen. We’ve seen them happen in fights all the time, and some guys continue. Some guys or women can’t. I guess that’s one thing. Being prepared for the unknown, which is hard to be prepared for because who the hell knows what’s going to happen? Just being more open, more prepared. That’s about it.”

The prep began with rehabbing his arm, his second major injury of 2020. Earlier in the year, as rumors picked up about a fight with Darren Till, Cannonier suffered a torn pectoral muscle, which he said, “wasn’t fun to come back from.”

As a whole, 2020 served as quite the roadblock year for Cannonier. On top of the COVID-19 pandemic flipping the world on its head, Cannonier dealt with two serious injuries and his first loss at middleweight as he approached the cusp of a title shot. However, when he reflects on the speed bump of a year, he kind of brushes off any wallowing energy and instead looks forward.

And in the immediate future awaits Kelvin Gastelum, who is also coming off a decision loss to Whittaker. Throughout Gastelum’s UFC career, he has shown both stunning knockout power and admirable durability, as well as the goods to challenge for the title. He was originally supposed to challenge Whittaker for the undisputed crown in 2019 before Whittaker had to step out of the fight at the last moment, and he pushed Adesanya for five rounds in an interim title bout later that year.

“I’m sure (Gastelum is) going to come out and be intolerant of me because I’m going to impose,” Cannonier said. “He’s going to be like, ‘No, I can’t let you do that.’ Naturally. The ref is going to say, ‘Go,’ and we’re both going to walk to the center, and we’re going to do what we do…We both throw hands. I plan on throwing more hands than I usually do, and with that, I plan on hitting him more than I usually hit people in my fights. The question is: how long is he going to last?”

For Cannonier, the fight also represents his second main event fight. His first came in September 2019 when he knocked out Jack Hermansson in the second round of their fight in Denmark. Cannonier said he didn’t pull much from that fight into this one but, on the whole, he mentioned fans should expect much more activity than usual from him offensively. 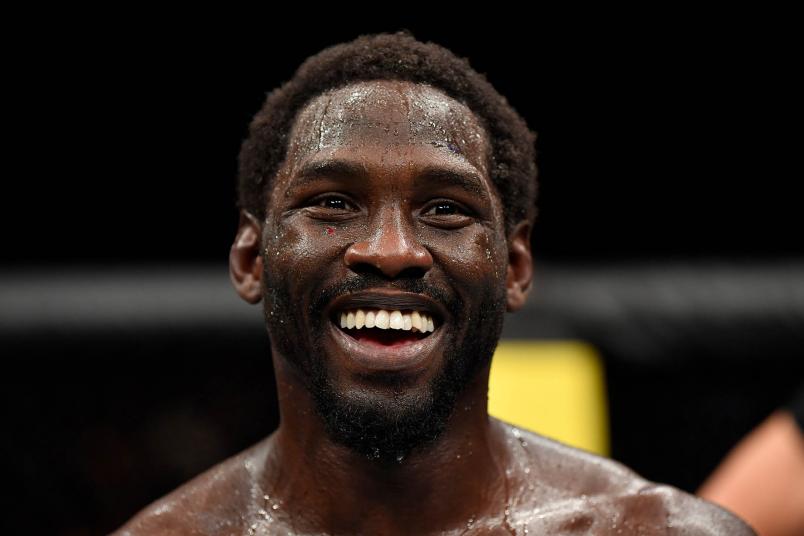 “That’s just something I have to do, in general,” he said. “That’s just a road I’m taking to being a better fighter. I have a relatively – I don’t want to say a low punch count – but it’s efficient. I don’t do a lot of throwaway punches, so I’m not throwing 100 punches a round or anything like that, but I’m getting to the point to where I’m going to start throwing more punches, and I don’t want my percentage to go down, so that’s going to only mean that I’m going to be hitting people more.”

It’s a fight that could launch both men right back into the title mix, especially considering how active Adesanya is as champion. Currently, it seems “The Last Stylebender” is set on a rematch with Whittaker as his next defense, but the proverbial on-deck circle remains relatively empty.

Cannonier isn’t getting all too caught up with that prospect, though, as his attention is almost entirely fixed on Gastelum and cementing his status as an elite fighter at 185 pounds.