To this point, the Polish veteran’s UFC tenure can be split into two very distinct halves — his first six fights and his last seven appearances.
By E. Spencer Kyte, on Twitter @SpencerKyte • Feb. 13, 2020

When Jan Blachowicz squares off with Corey Anderson on Saturday night in the main event of this weekend’s UFC Fight Night card at the Santa Ana Star Center in Rio Rancho, New Mexico, it will mark the 14th time he’s made the walk to the Octagon.

To this point, the Polish veteran’s UFC tenure can be split into two very distinct halves — his first six fights and his last seven appearances.

His opening half dozen fights produced a 2-4 record, including a lopsided decision loss to Anderson in their first meeting at UFC 191. His victories — a first-round stoppage win over Ilir Latifi in his debut and a unanimous decision triumph over Igor Pokrajac — were each chased by tandem setbacks, and left many observers wondering if the long-time KSW standout was capable of competing with the best light heavyweights in the world.

But over his last seven outings, Blachowicz has answered that question with a resounding “Yes,” posting a 6-1 mark that includes wins over Jared Cannonier, Luke Rockhold, and Ronaldo “Jacare” Souza; a run that has elevated the 36-year-old into the thick of the title chase in the 205-pound weight class.

So what has changed?

“I did a lot of mistakes in the first fight,” Blachowicz said of his initial meeting with Anderson, which took place in Las Vegas. “No excuses, he beat me. I had to find out what went wrong and I know that what went wrong was that I was over-trained and I had jetlag.

“You saw that fight — after two minutes, I was completely exhausted. This time, I’m not over-trained and I came to Rio Rancho more than two weeks before the fight, so no jetlag. I feel great and like I posted on Instagram, ‘Same opponent, different story.’”

To anyone that hasn’t crossed multiple time zones through the air or dealt with shifts in elevation, the idea of needing to acclimate to a different location or elevation and the challenges of doing so may sound like easy excuses that don’t really carry much weight, but those who have traveled know the struggle is real and the results are evident in Blachowicz’ past performances.

The fight with Anderson in Las Vegas was his first in North America. His second was a loss to Patrick Cummins at UFC 210 in Buffalo, New York, where he again felt lethargic. Since then, any time he’s fought outside of Europe, Blachowicz has made his way to the host city well in advance, giving himself ample time to get acclimated to his surroundings and thereby ensuring he’ll be at his best come fight night.

In addition to making sure to ward against jetlag following the Cummins bout, he also reconnected with his long-time coach, Robert Jocz.

“I came back to my old coach when the UFC was in Gdansk when I fought Devin Clark,” explained Blachowicz. “When I was with that coach, I won almost everything. When I came back to him, I’m where I am right now — one of the best fighters in the world.

It most certainly is.

Currently riding a two-fight winning streak and victorious in six of his last seven, Blachowicz is in a prime position to cement his position as a top contender in the light heavyweight ranks with a win on Saturday night in New Mexico.

Despite his impressive current form, however, discussion of this fight and what the future of the light heavyweight division looks like in the wake of last weekend’s title clash between Jon Jones and Dominick Reyes seems largely focused on Anderson, with Blachowicz being cast as a non-threatening obstacle in the former Ultimate Fighter winner’s path to title contention.

“I don’t care,” he said when asked about being somewhat overlooked by the public heading into this weekend’s main event. “I can be the underdog; I don’t care. The pressure is on Corey’s side, not on me, so I don’t care. It’s good for me.

“He beat me the first time and he knocked out Johnny Walker, so everybody thinks he’s much better than me, but they are wrong and I’ll prove that on Saturday,” he added. “They put pressure on him, not on me. My mind is clear, I know what I have to do, and I will do this.” 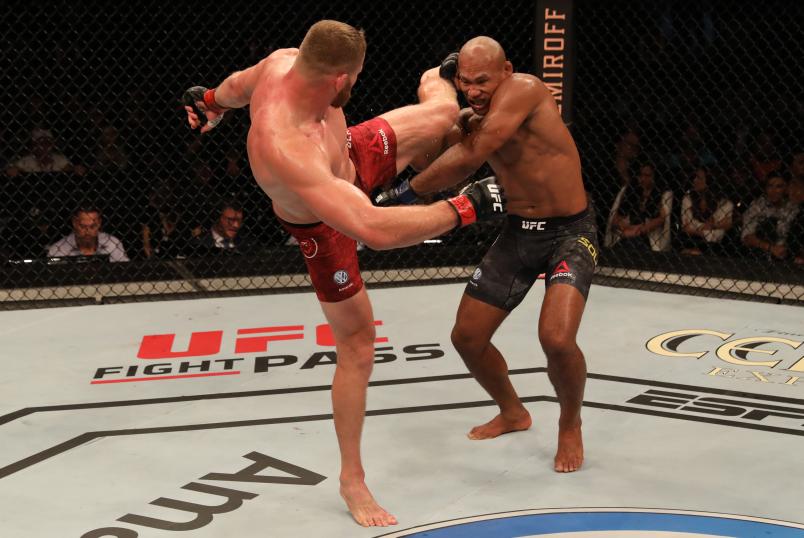 While things with Anderson certainly didn’t go his way four-plus years ago at the MGM Grand, his history in rematches has provided Blachowicz with a little additional comfort and assuredness heading into their second meeting on Saturday.

“Everybody has to learn,” began Blachowicz, who has squared off against an opponent who has beaten him twice before, emerging victorious both times. “When you lose, you lose, but you have to learn something in order to be a better fighter. Every time I lose, I learn something and try not to make the same mistakes.

It may have taken Jan Blachowicz a little time to figure out how to be at his best inside the Octagon every time out, but since getting the old band back together and becoming an early traveler, everything has clicked for the Polish standout and he expects that to continue this weekend.

“I am ready for everything, but I think Corey is going to use his boxing and try to take me down; do the same thing he did in the first fight,” he said. “But when I visualize this fight, I see myself knocking him out in the second round.

“I don’t know if it will be a left hand or a right hand, but I see me knocking him out.”