"Legendary Polish Power" Has An Appreciation For His Champ Status Unlike Any Other
By E. Spencer Kyte, on Twitter @SpencerKyte • Oct. 25, 2021

You can tell that Jan Blachowicz has a different level of appreciation for being UFC light heavyweight champion than some of his contemporaries do for standing atop their respective divisions.

It’s not that they’re not proud of their accomplishments, but having navigated a longer, more difficult path to claim championship gold, the Polish standout seems to revel in residing at the top of one of the marquee divisions in the promotion’s history a little more than his younger colleagues.

“It was a long journey for me,” began Blachowicz, who defends his title for the second time this year in the main event of UFC 267 this weekend in Abu Dhabi against fellow veteran Glover Teixeira. “I’ve had problems in my career because I lost a couple fights, but I never surrendered, I never said stopped believing in myself and in my legendary Polish power.

“I knew in the future I would be the champion — I just had to wait, find the way to do it, and I did it; I’m the champion of the world.”

What Blachowicz calls “a couple fights” was a five-fight stretch where he earned only one victory, leaving him with a 2-4 record through his first six UFC appearances after amassing a 17-3 mark prior to transitioning into the Octagon from KSW.

Although he’d defeated quality opposition while claiming championship gold for the elite European promotion and opened his UFC career with a blistering first-round stoppage win over Ilir Latifi as a result of a thudding kick to the body, that stretch, which featured twin decision losses on either side of a victory over Igor Pokrajac, left many wondering if Blachowicz was a highly regarded European fighter that just couldn’t quite cut it when competing against the absolute best in the sport.

In the 10 fights since suffering a majority decision loss to Patrick Cummins at UFC 210 — the final fight in that ugly five-fight run — Blachowicz has gone 9-1 and carries a five-fight winning streak into his clash with Teixeira on Saturday.

“That was a hard time for me — really hard — but I’m the kind of person that after I lose a fight, I don’t hide under the bed and I don’t cry; I just have to find what went wrong,” explained Blachowicz, who marked the one-year anniversary of his title win in September with an Instagram post, and welcomes the chance to return to Abu Dhabi for his second title defense this weekend. “I started making studies of all my fights: what I did before when I won fights, and what I was doing when I started to lose the fights and I don’t enjoy training, I don’t feel the fire. Why? What was that?

“I connected the dots correctly and found what was wrong,” continued the 38-year-old titleholder. “I changed gyms a couple times, and that was a couple mistakes. I came back to my old coach, I came back to my roots, and doing exactly what I was doing when I won almost all my fights, and it works. 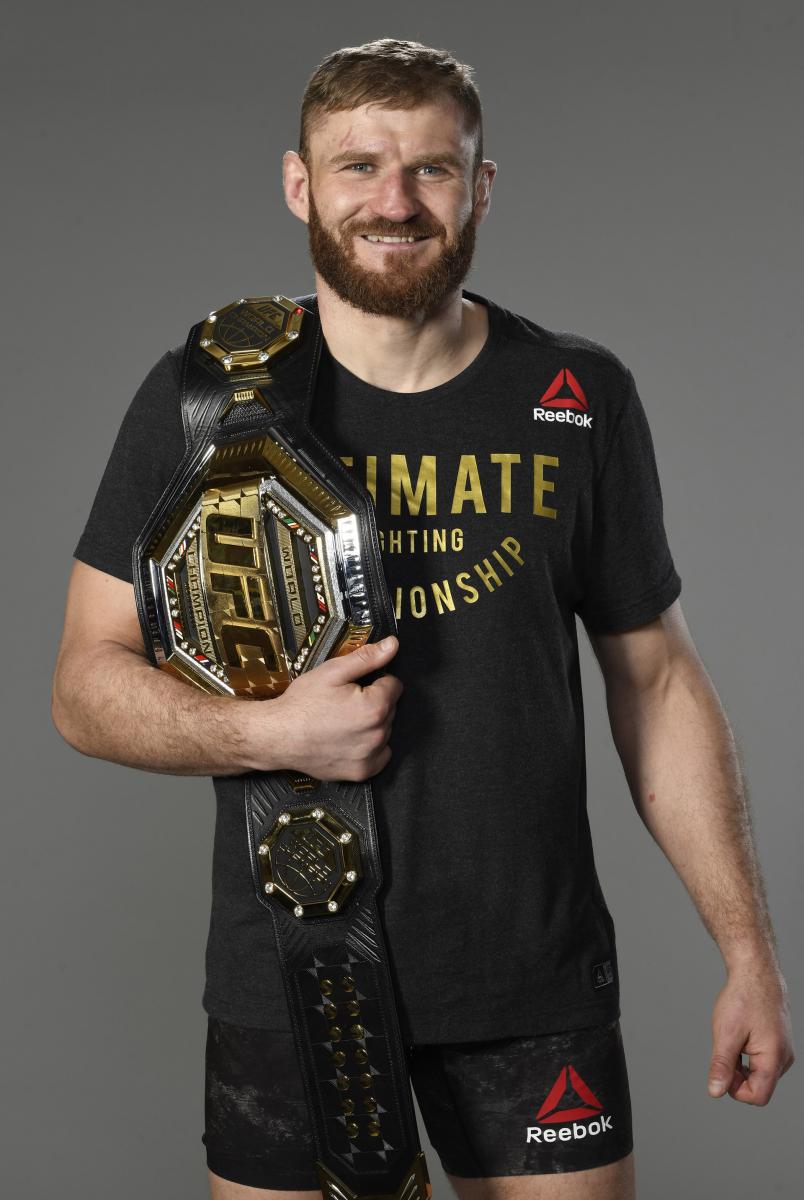 Jan Blachowicz of Poland poses for a portrait after his victory during the UFC 259 event at UFC APEX on March 06, 2021 in Las Vegas, Nevada. (Photo by Mike Roach/Zuffa LLC)

“I’m happy, I feel the fire, I still enjoy this sport, and that’s it,” he added with a chuckle. “I found the reasons why I lost the fights and I never stopped believing in myself.”

That belief, in both himself and his legendary Polish power, not only propelled him to victories over Luke Rockhold and Corey Anderson on his way to beating Reyes for the vacant title last fall, but it also helped him secure the biggest win of her career earlier this year in Las Vegas.

A little more than six months after claiming the light heavyweight strap, Blachowicz defended his title for the first time against undefeated middleweight champion Israel Adesanya, as neither man had an obvious challenger at the ready in their respective divisions and “The Last Stylebender” had set his sights on attempting to become the latest fighter to earn “Double Champ” status in the UFC.

Adesanya was picked by many to secure the victory, viewed as too fast, too skilled, and too slick for Blachowicz, but it was the light heavyweight titleholder that proved to be too much for his colleague from the middleweight ranks to contend with. After running close to level through the opening three rounds, Blachowicz turned to his wrestling, putting Adesanya on the deck and keeping him there for long stretches in the fourth and fifth rounds, salting away a statement victory and his first successful title defense.

“It was really big because Izzy is a great sportsman and I beat him,” he said of March victory over Adesanya. “I proved that I’m a true champion — I defended my belt and people started to respect me.

“Before that fight, a lot of people didn’t treat me like a true champion, but I showed them that I’m a real champion, a true champion, and that’s it. I was happy that I could prove not only to them, but also to myself that I can do something big.

“It was an amazing feeling after that fight; I celebrated for two weeks, maybe more.”

Now, nearly eight months later, Blachowicz is set to step back into the Octagon to defend his title for a second time. This time, he’s not facing an undefeated superstar looking to etch his name in the history books, but a fellow veteran who has forged a similar path to Saturday’s championship main event.

“I’m happy that he did it because we’ve got similar stories; his is a little bit longer, but they’re similar stories with a couple losses,” he said of Teixeira, who turns 42 a couple of days prior to the fight and navigated a rough patch of his own a few years back before rattling off five straight victories to secure this second attempt to claim UFC gold.

“He’s one of the best, he’s been in this sport a long time, and I’m happy that we’re going to fight together. I’ve got a lot of respect for him — I respect his skills — but I need to knock him out, and I will.”

Should that come to pass, it would put Blachowicz in the thick of the hunt for Fighter of the Year honors, if not make him the clubhouse leader heading into the final two months of the 2021 campaign.

Just as some of his younger contemporaries may not appreciate being champion as much as he does, the veteran is also much more honest and open about what such an award would mean to him.

“Of course!” he said emphatically when asked if adding year-end awards to his mantle is something he thinks about as he readies to step in and face Teixeira this weekend. “It would be something nice if I would be the Fighter of the Year.

“These things all motivate me. I’m the champion, so I’m looking for new opportunities to motivate me. We’ve got Glover and he’s a big motivation for me to go to the gym and train, but I also want to do something big — to be in the Hall of Fame, to be Fighter of the Year.

And if Blachowicz does successfully retain his title on Saturday, there are new challengers awaiting their opportunity to fight for championship gold, including Jiri Prochazka and Aleksander Rakic, and the Polish veteran has long considered a move to heavyweight, and still does.

“I don’t know if it’s going to be Rakic or Jiri — we will see — but I’m happy that we’ve got young fighters with big talents because they motivate me,” offered the champion. “I feel the pressure on my back all the time, so they motivate me to go to the gym and train hard.

“After this fight, maybe two, three title defenses, and then maybe we’ll go to heavyweight to check my skills in that category.”

But first, he wants to sit down with Teixeira and toast to a pair of veterans having battled through adversity and uncertain times to fight for championship gold on the biggest stage in the sport, and he intends to do it with the light heavyweight title still in his possession.

“I think after the fight, he’s the kind of guy that we’re going to go somewhere and drink some beers together,” Blachowicz added. “But sorry Glover, I’m going to be the champion after this fight.