"I’m not taking easy fights. I’m looking for the fastest way to get
to that title. I want that 20 pounds of gold around my
waist. I want to be world champion again." - Jamie Varner 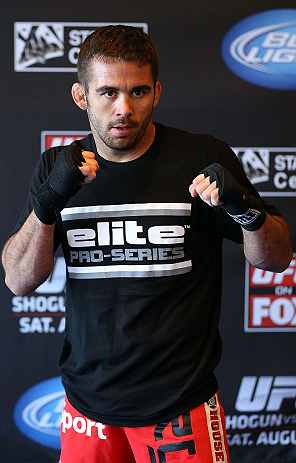 Jamie Varner was getting a tattoo done on his arm to pay homage to his mother’s side of the family, which hails from Greece. His great grandfather came to Chicago from Sparta to open a Greek restaurant, before moving to Tucson, where his mother was born and raised. Varner is half Greek, half Irish, but a lot closer to his Greek side, so the ink was a tribute to the Spartan warrior.

The Spartan represents more than Varner’s heritage. In ancient times Sparta was the dominant Greek city state that ruled with the country’s greatest military power that, starting at age seven, bred its soldiers to fight to the death. The way of the Spartan was to fight like hell without thinking twice. That’s long been a part of Varner’s essence until he fell into a ditch that had him questioning the warrior within.

Once he got it back, there was no stopping a competitor who once ruled the WEC lightweight division, especially not three weeks’ notice in accepting a fight with a top contender on national television. Varner got the call to replace an injured Terry Etim and fight Joe Lauzon at UFC on FOX 4 in August, so he abruptly left the parlor with the intention of finishing four weeks later, put a wrap on his arm and went straight to the gym.

Varner lost a three-round war to Lauzon by submitting to a triangle choke, but the Spartan mentality that previously led him to gold had returned, one that will be severely tested on Saturday at The Ultimate Finale, and odds are this one will not go the distance.

Careers could be at stake as well. Once a win away from a shot at the UFC lightweight title, Guillard is 1-3 in his last four with all three losses coming in the first round. Varner justified an invite back into Zuffa with May’s stunning upset of the Edison Barboza, heralded as the latest next big superstar, but is 1-4-1 over his last five competing at MMA’s highest level.

“Sometimes having that reckless abandon isn’t always good,” Varner continued, speaking for himself. “Sometimes you do have to play it safe, but more often than not it works out in my favor when I’m going for the finish.”

Because it wasn’t working for Varner for too long, there were no feelings of disrespect when it was considered an upset that a former champion handed Barboza his first career loss. There was a time when Varner was 16-2 (2 NC) and king of the WEC mountain, winning the title with a third-round knockout of Rob McCullough on February 13, 2008. He enjoyed a two-year reign until WEC 38 in January 2009 when he dropped the title to a rising star named Benson Henderson. Another first-round loss, this one at WEC’s December 2010 swan song to Shane Roller, and Varner was released.

From champion to a has-been still in his 20s, Varner understood the doubts when he accepted the Barboza fight after Evan Dunham’s injury re-opened the door to the UFC. Barboza was the newest unstoppable force to invade the sport and Varner was considered finished.

Relegated to the independent circuit to begin his post-Zuffa career, Varner’s fighting days were on life support. He scored a first-round submission of Tyler Combs on an XFO show, but four months later reached the abyss. He agreed to headline Titan Fighting Championships 20 on September 23, 2011 against Dakota Cochrane and eventually realized there was a difference between having to fight and wanting to fight. At a catchweight of 165 pounds, Varner lost his first regional bout in eight years -- and a whole lot more.

“I just didn’t want to fight anymore,” Varner said. “The fight with Dakota was just out of necessity and not out of want, will or desire. I shouldn’t have taken the fight, but I took it anyway because I needed the money. I said I never wanted to fight for the money. I wanted to fight for the will, the passion and the desire. I kind of went back on everything that made me who I was and everything I believed in.”

Being a perfectionist was working against him. He’d get hit once in sparring, frustrations would immediately boil over. He’d make a mistake, he’d self-sabotage. Desperate for a fresh outlook, his belief system distorted, Varner moved from the AMA Fight Club in Whippany, N.J., to suburban Phoenix to train with the MMA Lab and Arizona Combat Sports. It was in his new surroundings where Varner learned he had to allow himself to make mistakes and reclaim how and why he loved fighting. Or as Tony Robbins once wrote, “Everything you and I do, we do either out of our need to avoid pain or our desire to gain pleasure.”

“I had to not associate fighting and the competition with pain and associate myself with pleasure, telling myself this is what I wanted,” Varner said.

“I’m getting what I wanted. Once I started changing my beliefs, enjoying what I was doing for a living and respecting the fact that I was given another opportunity, this gift from God to go out there and compete and have these abilities, it made me appreciate myself and appreciate it so much more.”

Varner roared back with consecutive first-round wins for XFC that set up the call back to Zuffa and Barboza. It took him three minutes and 23 seconds to proclaim his return to prominence by smashing the previously unbeaten prodigy with punches to score the TKO victory. For the first time in a long time, even when many remained skeptical, Varner refused to doubt himself, not for a second.

“I had a lot of growing up to do,” Varner said. “I totally respect the doubts from people because I would have doubted myself. If I was a betting man and I saw that this guy, his last two years, his record was 1-4-1, I probably wouldn’t have put money on him against ‘the next Anderson Silva of the UFC.’ (The doubters) had a right to their opinion and I had to prove a lot of them wrong.”

Seeds for redemption were planted at both Arizona Combat Sports and the MMA Lab, where respective head instructors Trevor Lally and John Crouch -- “Those two, it’s like fire and ice,” Varner said. “I can find a happy medium that really works well and has got me in this place mentally.” – reignited Varner’s love for MMA by changing his ideas and approach. Despite the loss to Lauzon, Varner’s effort moved him back into the upper echelon of the lightweight division. The fight was taken on three weeks’ notice, and in the second round Varner fractured the fourth metacarpal in his right hand.

Neither stopped the Spartan within from going for the kill.

“That was a fight I was clearly winning, but because of my burning desire to finish the fight, put on a show, I went for one too many takedowns in the third period with a broken hand and got caught in a triangle,” Varner said.

Varner’s pain became a breakthrough, finally taking him to a place of inner peace and pleasure. There’s only one final destination and Guillard is the next rocky mountain standing in the way.

“I’m not taking easy fights. I’m looking for the fastest way to get to that title,” Varner said. “I want that 20 pounds of gold around my waist. I want to be world champion again.”