UFC Lightweight Jamie Mullarkey's Time In The UFC Has Been Short, But Action-Packed. Expect The Same From The Australian On UFC 260.
By UFC Australia Staff • Mar. 23, 2021

Aussie lightweight Jamie Mullarkey knows a thing or two about performing. In his Octagon debut at UFC 243, the 26-year-old put on such a show that he scored a $50,000 bonus from UFC President Dana White for his Fight of the Night with Kiwi Brad Riddell.

Mullarkey (12-4) lost on points on that occasion, but he wants fans to know he’ll be bringing the same energy to his upcoming bout against American Khama Worthy (16-7) at UFC 260.

Unfortunately for the former plumber, his second UFC appearance – against Fares Ziam back in October– was also a decision loss. However, his record prior to that of eight wins by KO and three by submission tells a different story.

Explains the man himself: “I never go out there to play pitter-pat. I’m there to try and stop ya. I never want to leave it in the hands of the judges as I did [against Ziam]. For that reason, I think you’re going to see a very fan-friendly fight against Worthy.”

Like a lot of people, Mullarkey got hooked on MMA after watching The Ultimate Fighter.

“It was Season 7 that caught me,” he says, “and pretty soon, Forrest Griffin became my favorite fighter. His work ethic and mentality were what I loved about him. He wasn’t the most skilled – as he was the first to admit – but he was the hardest worker in the UFC. A lot of people saw the whole thing as a cage fight, but I saw it as a technical thing and a true martial art. And I became obsessed with it.” 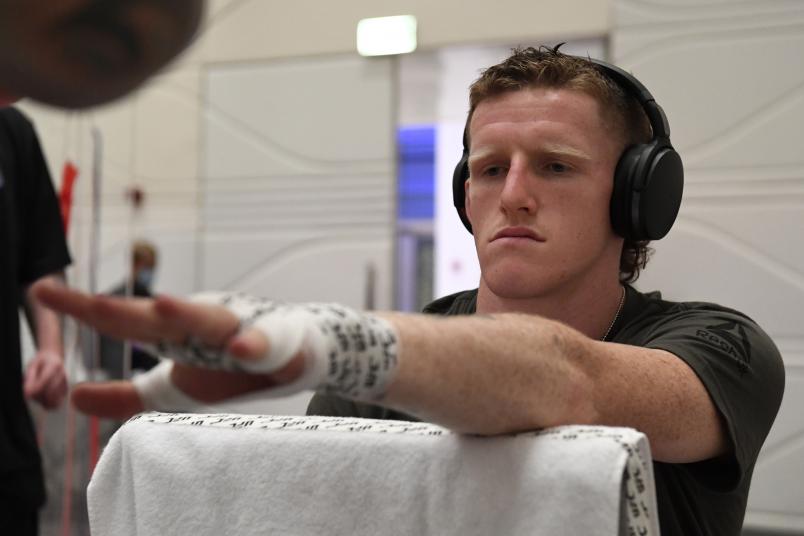 A short time later, while trying to stay fit for the rugby league season, Mullarkey took an MMA class. On the very first night, he knew he’d found his new sport…

“I threw a guy in an armbar and that was it. I think a lot of Aussie boys come into MMA from footy. They pick up the wrestling aspect easily and have the tough mentality you need. I had my first fight a year or so later and there was no going back to footy.”

By the age of 21, Mullarkey had racked up eight victories and a championship on the Australian MMA scene. The opponent who would hand him his first defeat? A rising talent by the name of Alexander Volkanovski.

“I learned a lot about myself in that fight,” admits Jamie, who has no hard feelings towards the current UFC featherweight titleholder. “Volk’s a legend. We get on really well now and actually just did a great training camp together. We got a really good bunch of guys and I’m learning a lot.”

Another person the 155er credits as crucial to his development is former UFC fighter Ross Pearson, who now calls Australia home and has opened an MMA gym close to where Mullarkey lives on the Central Coast of NSW. 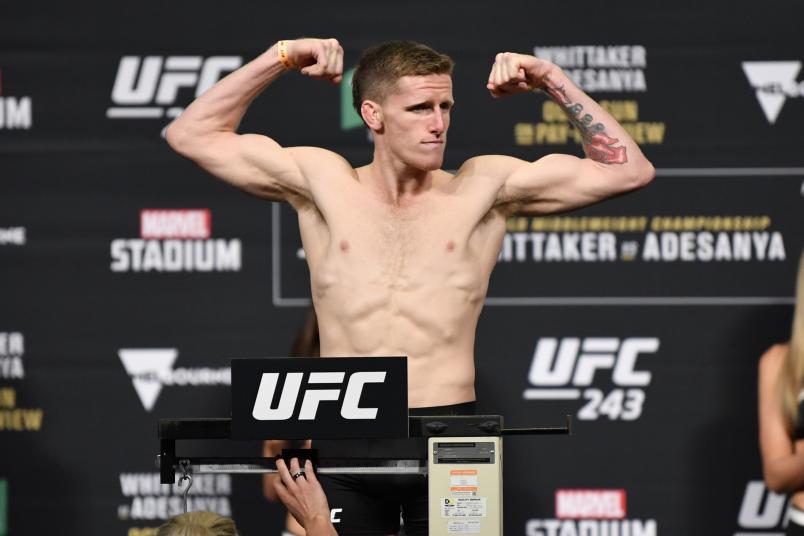 Jamie Mullarkey of Australia poses on the scale during the UFC 243 weigh-in at Marvel Stadium on October 05, 2019 in Melbourne, Australia. (Photo by Jeff Bottari/Zuffa LLC)

“Ross is an unreal coach. It’s weird, but he can read me like a book. He takes one look and knows what I’m feeling or thinking. It’s great having a coach who has already done what I’m doing so many times. It helps me to relax when I’m feeling stressed, and I can just focus on what I have to do.”

While many professional fighters gravitate towards bigger gyms, bigger cities and even other countries to level up their skills, Mullarkey has no plans to leave his neck of the woods.

“I’m very proud of where I’m from,” he declares. “The support and love I get is amazing. I’ll be at the beach or wherever and people will come up and say something encouraging. It really means a lot –especially if I’m having a bad day or have just done a hard session in the gym. It’s a really beautiful place, too.”

It's that sort of positivity he hopes will carry him to victory in the biggest fight of his career, at UFC 260 in Las Vegas.

“Worthy is a very good opponent; he’s been around a while,” says Mullarkey. “But I’ve never felt this good coming into a fight. I’ve got a plan and I can see myself getting the win. I’m confident I’m going to get that finish.”