Jamie Mullarkey Is Obsessed With Being The Best

If there’s one thing you should know about 27-year-old Jamie Mullarkey, it’s that he doesn’t do things by halves. He trains hard, he fights hard and, judging by all of the finishes on his MMA record, he hits pretty hard, too.

The Australian 155-pounder, set to face highly respected American veteran Michael Johnson at UFC Fight Night: Dos Anjos vs Fiziev, assures us that finishing fights is always on his mind.

“Not everyone has that killer instinct, but I do,” says Mullarkey.“If you look at my record, nearly all of my wins have come by stoppage. I’m always looking to get the other guy out of there. That’s just how I am.”

After arriving in the UFC in 2019, Mullarkey was on the wrong side of two decisions. He then won his next two bouts via spectacular knockouts against tough opposition, only to come up short when he faced rising star Jalin Turner at UFC 272 in March, being finished for the first time in the promotion.

“I had a few weeks off after that,” admits the Aussie. “I got my body right, refocused myself, then got back into training. That loss still stings a little bit, so I’m very hungry coming into this next fight against Michael Johnson.”

“It’s made me level up. There are more guys there to train with, and Volk himself is just great to be around. He is so obsessed with the sport and it gives me the drive to learn, learn, learn. Volk’s got this underdog mentality – he never stops trying to improve and he never gives up. If there’s one thing I want to take away from training with him, it’s that mentality.”

Recently, Mullarkey also worked with City Kickboxing striking coach Mike Angove, who brought a team of fighters over from New Zealand to train at Freestyle MMA and was happy to share his knowledge. “Mike is a legend. I learned a lot from that man – he spent a lot of time helping me out.”

If you’ve ever imagined UFC fighters sitting at home, avidly tuning in to the events in which they’re not involved, well, in Mullarkey’s case, that picture is accurate. The Central Coast native is a hardcore fan. 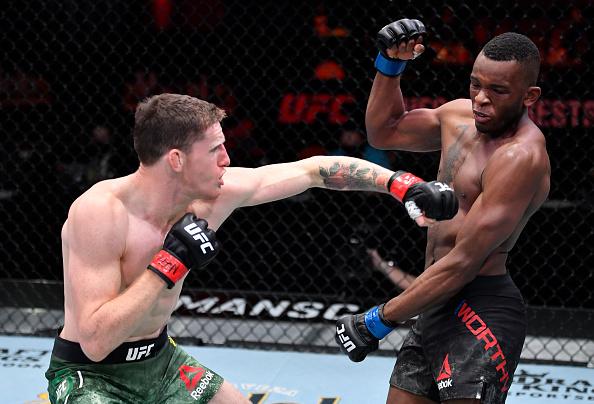 “Every weekend it’s on, I’m watching the UFC,” he admits. “Every event, I’m looking closely at who is fighting. And I’m not just watching them because I might have to fight them one day; I’m watching because I’m obsessed with the sport, too. It’s always changing and there’s always something new to learn.

“The recent Singapore event was great! I was excited for all of the Aussies competing [and winning], and I’ve been getting great energy back from them. Our corner of the world is producing some of the best fighters right now. It’s giving me a massive confidence boost.”

Confidence is something he will definitely need when facing Michael Johnson at UFC Fight Night: Dos Anjos vs Fiziev, with “The Menace” boasting victories over other big names such as Dustin Poirier, Edson Barboza and Tony Ferguson. Mullarkey is excited by the matchup, though.

“It’s awesome to be fighting one of the OGs of the sport,” he enthuses. “[Johnson is] a very tough opponent. He’s explosive and also a seasoned veteran. 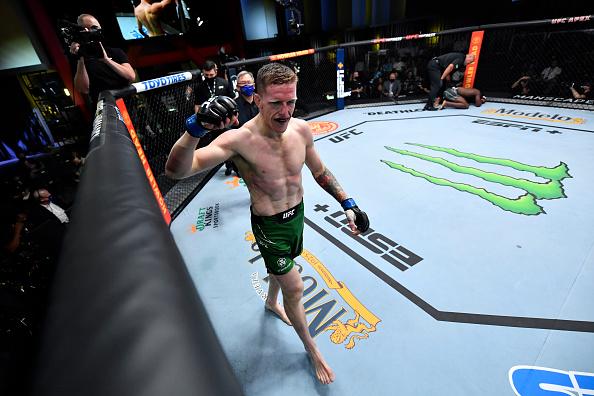 Jamie Mullarkey of Australia celebrates his TKO victory over Devonte Smith in their lightweight bout during the UFC Fight Night event at UFC APEX on October 02, 2021 in Las Vegas, Nevada. (Photo by Jeff Bottari/Zuffa LLC)

“My prediction is that it’s going to be an exciting, fast-paced fight, but that I’m going to finish with my hand raised. I’m coming in with all guns blazing. I’ve got a great game plan and am feeling very prepared.”

There’s no denying that a win over an opponent who has been a force in the UFC for more than a decade would mark the Australian as a genuine contender in the lightweight division. One thing’s for sure: once the Octagon door closes, Jamie Mullarkey will be looking for a finish.